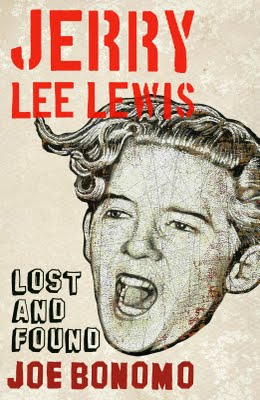 In the 21st century, it’s a bit of a challenge for a writer – even a very good one – to write a book about one of rock’n’roll’s early leaders. Because, of course, it’s all been done before. What could anyone possibly have new to say about such an oft-covered artist as Jerry Lee Lewis?

Quite a bit, if the writer is Joe Bonomo. I first discovered his writing while researching my own Fleshtones interview/feature: I read his book, Sweat: The Story of The Fleshtones, America’s Garage Band. I was mightily impressed with that tome, and on several levels. One, it was quite in-depth, not an airport terminal read but rather an exhaustive chronicle of the band. Two, it was revelatory. For an authorized bio, it went into some pretty personal areas. Bonomo handled those deftly, maintaining journalistic ethics while not unduly dishing dirt.

Yet when I learned about Jerry Lee Lewis: Lost and Found, I wondered if a similar approach would work, or would even be possible. Lewis isn’t known for giving open access (or any access) to writers, so how could Bonomo get material? A lesser writer would merely rehash and rephrase the work of authors previous: hey, I’ve seen it done, and often. And in this case, there’s good material to work with. Lewis’ so-called “child bride” Myra Lewis wrote Great Balls of Fire in 1982, and the book was developed into a film in ’89. (As luck would have it, Myra’s co-writer was Murray Silver, who would go on to influence me to no end when I took his college class American Popular Music: Stephen Foster to Present in the mid 80s. Silver went on to serve as technical adviser for the biopic).

There was also Jerry Lee’s own autobiography, as well as the inimitable Nick Tosches‘ work Hellfire. But I never expected Joe Bonomo to simply regurgitate those works. And he did not. Instead he’s crafted a look at the critical rise and fall (and rise, and fall) of Lewis’ career. And he’s nestled this chronology within a personal story of his own discovery of Lewis’ music. To many readers of a certain age (those who were pre-teens at the dawn of the 1970s) Bonomo’s story will likely ring familiar and true.

It’s walking a fine line to write a book that (a) tells the story one wants to tell and (b) uses lovely and descriptive language to do it but (c) writes in a way that doesn’t attract undue attention to the writing style. Bonomo wins on all three counts with this book. Here’s a representative sample of the heartfelt, rhapsodic and colorful writing found in this book’s pages. Describing Lewis’ early trio on the 1958 track “Lewis Boogie,” Bonomo writes:

As is the case with Jerry Lee’s great early Sun recordings, Van Eaton and Janes don’t so much accompany Jerry Lee as they come along for the ride – the rhythm track swings beautifully, and Van Eaton’s and Janes’ participation is crucial to the sound and vibe of the tune, much in the way that the shotgun-rider and backseat clowns are crucial for any drunken joyride.

Damn, I love that imagery: you can almost hear the music while reading the pages.

Jerry Lee Lewis: Lost and Found mostly concerns itself with Lewis’ landmark album Live! At the Star Club Hamburg in 1964, and with Lewis’ eventual turn toward country and western music toward the end of that decade. But those major turning points are placed into the needed context – musically, chronologically, etc. – so that they make sense. Though Bonomo’s story is ultimately a personal one, the reader need not be well-versed in Lewis’ life story to gain a great deal from reading.

In fact, hours spent with Jerry Lee Lewis: Lost and Found (as of late 2011, out in paperback) will almost surely send the reader to his or her choice of media to listen to the Killer’s best work. And ultimately, that’s one of Bonomo’s primary goals with this book.