Continued from my last entry…

Dave Rave / Madnuts – Double Single
I loved Dave Rave’s Live With What You Know, so I figured I’d dig his side of the single. “Rock the Party” aims for anthem territory, and would have fit nicely on the soundtrack to Rock & Roll High School. With its timeless vibe and vaguely Bo Diddley-sort of beat, it’s easy to imaging a screen full of extras twisting and frugging to Rave and band as they chant “I don’t care” and similar sentiments. “Gimme Gimme Gimme” Rave punks it up for a swaggering, slightly menacing rocker. Imagine “Pump it Up” covered by The Damned. Much harder-rocking than the platter of powerpop served up on Live With What You Know, Rave’s side of this single likely captures something closer to his live show.

The Italy-based Madnuts have a slightly Merseybeat approach, sprinkled with a more modern vibe a la Hoodoo Gurus. “We Need Time” evokes the paisley underground scene of the 1980s, but ultimately owes more to the sixties. When a clanging piano figure comes in near the song’s end, it’s a surprise addition to what had been a simple riffy rocker. “Living Too Fast” kicks off with a drum solo and then moves into a jittery, stuttering melody, then into an almost powerpop arrangement…then back to the jitters. Then, a long and catchy guitar solo. The song is stuffed with more ideas than one usually finds in a three-minute pop song. As a sampler, this does the trick: I’d love to hear more from these guys. 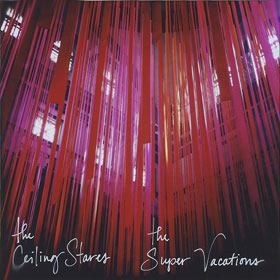 The Ceiling Stares’ “A Tunnel Though the Air” combines sixties garage sonic elements – cheesy organ, distorted fuzz guitar – and creates something decidedly more modern in the process. Lots of spirited harmony vocals contrast nicely with the garage vibe, and a stomping beat propels this catchy rocker along. The Super Vacations play what we used to call pilled-up rock. Wedding pop melodies (with lush vocal harmonies) to an amphetamine beat, “Hexing” is a bit reminiscent of The Lime Spiders. (I thought there was a second track called “Controller” but I guess they segue together.)

Lovely packaging and full-color cover art on this one.