Never exactly a household name, in 2011 Van Dyke Parks is nonetheless getting some well-deserved notice. A renowned arranger in the 1960s Los Angeles pop scene, Parks lent his creative approach to a number of highly-regarded (if not always million-selling) sides by artists including Sal Valentino (formerly of the Beau Brummels) and The Mojo Men. The latter’s baroque-pop cover of Stephen Stills’ “Sit Down I Think I Love You” was a highlight of the Lenny Kaye-curated Nuggets 2LP set in the 70s, and remained a highlight even when Rhino later expanded Nuggets to 4 CDs worth of goodies. 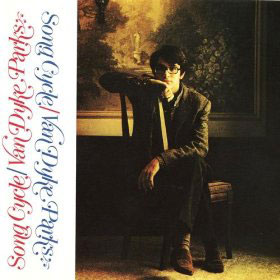 Speaking of Nuggets, Parks’ shadow looms large over the 2009 entry in that box set series, Where The Action Is! Los Angeles Nuggets 1965-1968; his “Come to the Sunshine” is a representative sunshine pop gem. And Parks made ends meet by doing a good bit of session work in that era as well, appearing on tracks by Paul Revere and the Raiders and many others in the L.A. scene.

But it’s not as if he faded from view — or gave up – after the sixties. While he’s perhaps most legendary for his involvement with the Brian Wilson/Beach Boys album-that-never-was (until in 2011, it was), SMiLE, Parks continued to work his arrangement magic for artists as diverse as Phil Ochs (the great-but-not-what-it’s-advertised-as Greatest Hits), and more recently, Joanna Newsom and Rufus Wainwright. His solo albums have enjoyed critical success, but Parks’ music — drawing as it does from an unusually wide array of styles – was perhaps never destined to move the masses.

With the November 2011 release of the fabled SMiLE album, Parks’ name is more frequently being raised in music-centric conversations. Most likely to capitalize on that inevitability, a compilation of Parks and Parks-related projects called Arrangements Volume 1 was released in fall of this year. Highlighting his solo work and contributions to the work of others (including Bonnie Raitt, Little Feat, Ry Cooder and Arlo Guthrie, to name but four), the single-disc set is a fine introduction for the uninitiated into the world of Van Dyke Parks. 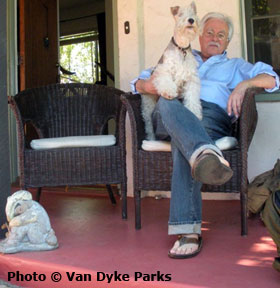 Parks is a quintessentially American artist, and his music – often but not always built around the piano – is decidedly rooted in pre-rock forms. One is more likely to discern shades of Stephen Foster, Meade “Lux” Lewis, Tin Pan Alley and show tunes than anything like, say, Jerry Lee Lewis. His lyrics tend toward the droll and personal. In short, the music of Van Dyke Parks is an acquired taste, but one well worth acquiring.

Van Dyke doesn’t often mount concert tours, so when I received word that he would be joining the Fleet Foxes tour for three-dates-only in October, I jumped at the chance to see him. While his music is quite different from the breathy chamber pop of the Fleet Foxes, the pairing made sense (and they’re huge fans of Parks’ work, having personally appealed to him to do these dates). The morning after the show at Asheville NC’s Thomas Wolfe Auditorium, I met with Parks – no surprise: he’s a witty and delightful conversationalist — over coffee. We enjoyed a wide-ranging discussion, one that ran more than twice the duration of his performance the night before. Here are some highlights from that meeting.

After we settle in with our coffees, Parks tells me about one of his most recent – and unlikely – projects. “I worked at Capitol Records studios for a guy called Skrillex. I had never heard of him, and I don’t know what he does, really,” he admits. “What he is, is a DJ. And I don’t know what a DJ does, and I don’t think I care! It’s stuff that I don’t understand; it seems vapid to me. It’s very shallow, it’s not musical, and,” he pauses for emphasis, “there’s every reason to detest it.” 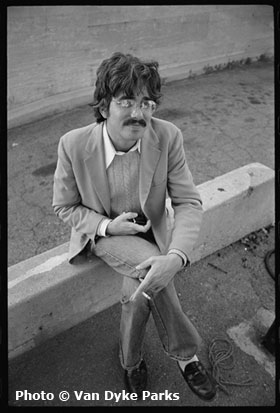 “They take music and chop it up,” he explains. “They do what they damn well want; they’re just one trench past music critics.” I smile uncomfortably. Parks then quotes Oscar Wilde: “Criticism is the highest form of autobiography.” I laugh and admit that I see a lot of truth in that statement. “If you look at a DJ,” Parks continues – and I mistakenly thought he had changed the subject! – “he is doing much the same thing, at a different level. So I was very wary of [the project].”

“But,” he continues, “I went and met this guy – I can’t tell you he was having a good hair day, and I couldn’t really tell if he was going or coming – but he was very energetic. And the preparation for the session was highly abstract. There would be, maybe, a minute with no harmonic information, [and I’d think,] ‘What chord is this? Stuff like that matters to an arranger!’ I was left out in freedomland,” Parks chuckles. “And I want to tell you something: it was probably the most imaginative musical experience I’ve ever had.”

Turning our conversation to his spot on the Fleet Foxes tour, I note that a quick and unscientific look around the audience the night before suggested that the overwhelming demographic was the 18-25 year old range. Surprisingly, when presented with Parks’ music — him on digital piano and voice, accompanied by upright bassist Jim Cooper – the young crowd responded enthusiastically. “You don’t see the opening act get a standing ovation very often,” I tell him.

Parks agrees that the billing with Fleet Foxes made some sense. “In their music, I hear choral arranging that reminds you of Beach Boys stuff. They’re genre hoppers; they go from one influence to another. Their influences are eclectic…”

Parks pauses for a moment: he clearly has another thought. “Yet ‘eclectic’ was initially a condemnation: it’s a big word that kind of paints people pink.” (“Dilettantism,” I suggest, and he agrees.) “The idea is that they’re criminals, somehow, for not sticking to one box. But of course, eclecticism can be very demanding on an audience. It can be mannered, pretentious; it can be unfitting, in fact.”

“But,” he continues, “music is globalizing. And this new generation of musicians couldn’t care less about how acceptable that is. They’re just driving their herd of admirers forward, with all kinds of influences, mixed in all sort of arrays that we would have never expected.” 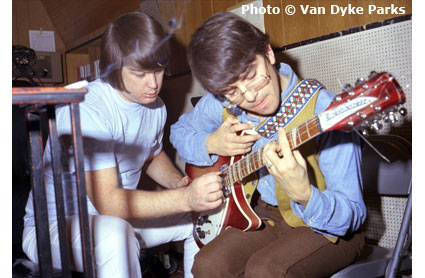 “So,” Parks says, tying it all nicely together as he tends to do, “a nutty old guy like me — that is, someone who is unafraid to follow his own madness and confess it publicly – is a pretty conservative creature in the face of what’s new.” Pressed on the sequence of events that actually led to his joining the tour, Parks admits, “It’s beyond me. I just take it as good circumstance. I wanted to take the chance and see what happened. And last night, we found acquittal,” he says, clearly pleased. He says that the Fleet Foxes’ “kindness toward me was validated by the crowd’s response.” Conceding that approval might be – pardon the phrase – fleeting, Parks admits, “I don’t have any trapping of high fashion in music. I’m sixty-eight years old, and the generation gap is an athletic one to jump across. And it takes a lot of work on the part of both the performer and the audience. But I like that uncertainty.”

In Part Two, Van Dyke Parks and I will discuss his studio history, live performance, 9/11 and — wait for it — SMiLE.