The Flaming Lips
Here’s the thing about the Flaming Lips: it’s all about the spectacle. Whether you like their music or not is almost, in some ways, beside the point. Saying that a given artist’s performances are “equal parts sound and spectacle” makes for a nice bit of alliteration, but when it comes to the Flips, it’s way more about the show. And I say this as a major fan of their music: for my money, 1999’s The Soft Bulletin was one of the best two albums of that decade (the other was OK Computer; sorry, Nirvana). And while Yoshimi Battles the Pink Robots (2002) and 2006’s At War With the Mystics had their share of amazing moments, the group’s output has been spotty since then. The Pink Floyd rethink album was better in concept than execution, and while Embryonic delivered the expected amount of weirdness, it was short on, y’know, actual tunes.

None of which matters a whit when one is presented with the opportunity to witness the Flaming Lips live onstage. Frontman/ringmaster Wayne Coyne is roughly my age (Michael Ivins and Steven Drozd are, I think, a bit younger) and thus came of age as a rock fan in the era when spectacle was highly revered. Love or hate KISS, Alice Cooper, Elton John or even Emerson, Lake and Palmer, they and their contemporaries put on shows that were a feast for the eyes (and, um, head). This sort of stuff clearly influenced the Flaming Lips: they seem committed to the idea that a rock concert can still be An Event. 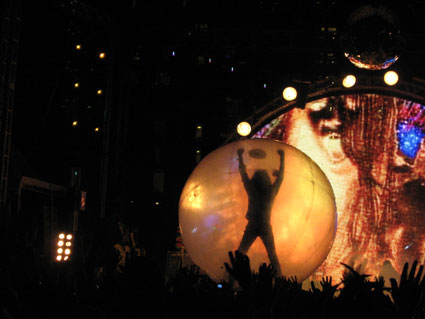 And indeed it can be. Most acts who are down with the idea of a visual extravaganza being a part of their show could only hope for a finale that equals the opening (forget about the ending!) of a Flaming Lips show. Long on gimmicks, the Lips have a number of tricks in their bag that anyone who’s seen them before will recognize. But somehow their shtick doesn’t get old: when Wayne gets into his “space bubble” and surfs over the crowd as the show opens, you may have seen it all before, but it’s every bit as wonderful as the first time you witnessed it (the Moogfest show was my third Flaming Lips concert). The crowd gets sprayed with tons of confetti. Glow sticks fly about. Balloons of every size and color bounce atop the heads of the concertgoers, and some of them are filled with even more confetti. Wayne’s bullhorn dispenses fog. And even the most jaded concertgoer has a huge, shit-eating grin pasted on their face. A Flaming Lips show is almost childlike in its sense of wonder: hey, let’s make this as cool as we possibly can!

There’s a clear dichotomy between the live and studio Flaming Lips, even though they’re the same people. The roles are different. Though brought into the group as a drummer, Drozd plays all the keyboard and most of the guitar parts onstage. In the studio, he plays pretty much all the instruments and writes the music. Coyne sings both onstage and in the studio, and he writes most of the lyrics. Onstage he plays a bit of guitar, but mostly busies himself with bullhorns, confetti cannons and endless, rambling raps to the audience between songs. Michael Ivins plays the bass sitting down in concert; in the studio, he sits in the control room, serving as the band’s engineer, and is a major architect of the group’s expansive, deeply textured sound (Drozd plays a lot of the bass parts on records). Kliph Spurlock used to be a roadie, then an honorary drummer. Now he’s a full member and the official (onstage, at least) drummer. A fifth member whom I didn’t recognize handles lead guitar parts. 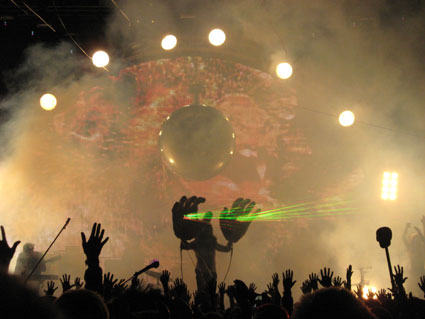 Serving up a nice mix of old and new at Moogfest, the Flaming Lips went all the way back to 1993 and pulled out “She Don’t Use Jelly,” one of the closest things they’ve ever had to a mainstream hit single. A number of relatively monotonous tunes were peppered into the set, but there was so much going on visually that it didn’t matter much. In honor of Bob Moog, the group trotted out Emerson Lake and Palmer’s “Lucky Man,” a song famous in part for its memorable Moog solo. Drozd played an extended version of the solo, but used a more modern instrument at the show.

Coyne’s between-song monologues could be tiresome for someone who came only for the music; occasionally the gaps between tunes did get a bit longish But to be fair, reloading all those confetti cannons takes time. But Wayne always worked hard to keep the crowd engaged, with nutty/edgy little asides like the one in which he insisted that he had just spoken with Asheville mayor Terry Bellamy backstage, and that she had given her blessing to the crowd smoking pot during the show.

No, the Flips didn’t perform their new “six hour song” or (shudder) their “twenty-four hour song,” but in the time allotted, they provided more entertainment than one could reasonably expect in any span of time. Who knows: The Flaming Lips may well have their best years musically yet ahead of them, but in the meantime, they still – as ever – put on a hell of a show. 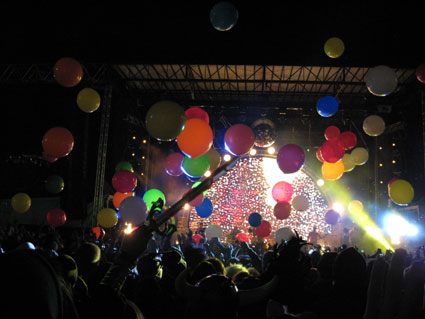 Amon Tobin: ISAM
Topping a Flaming Lips show is a tall feat, and I cannot report that Amon Tobin’s ISAM did so. But it was a tour-de-force of sorts. Tobin’s stage set is a high-tech stack of kiddie ABC blocks, all turned at 45° angles, forming a large screen of sorts. Near the center of one of these blocks is a larger block, and inside that is Tobin himself. Using a set of high-definition projectors, an endless array of visual images are projected upon this three-dimensional canvas. The images throb, melt, spin, undulate and generally move every way you could imagine (and quite a few you probably couldn’t imagine). It’s all very creative stuff, and a real assault on the senses.

After five minutes or so of being very impressed, I did began to wonder if Tobin could sustain the crowd’s interest for a full 75 minutes. Well, he did. The images never seemed to circle back upon themselves, and just when you’d think you’d seen it all, Tobin would pull out something else to dazzle your eyes.

Ears, not so much. The music was more a series of bass bombs and sound effects than anything with an actual melody, and while the visuals remained arresting the entire show, I eventually grew tired of the audio portion of Tobin’s performance. Endeavoring to avoid a headache that would preclude my enjoyment of the rest of the evening – two shows yet to go! – I made my exit.

Moon Duo
Allmusic.com tells us that Moon Duo are influenced by – among others – Suicide, a duo also on the Moogfest lineup (I didn’t see ’em). I don’t hear it. To my ears, the pair – Erik “Ripley” Johnson of Wooden Shjips on guitar and Sanae Yamada on keys – draw more from the psychedelic end of 1960s garage, with a sound not miles removed from that of Black Angels and (coincidentally) Black Mountain. Johnson, looking a lot like a mid-70s Howard Kaylan (Turtles/Flo & Eddie) churned out appealingly grungy licks on his Gibson SG, while Yamada evoked Piper at the Gates of Dawn organ work of Pink Floyd‘s Richard Wright. Sequenced beats – sometimes used on more than one song – held down the bottom, but Moon Duo’s delivery nonetheless remained quite organic. Within the confines of the at-capacity Asheville Music Hall, Moon Duo whipped the crowd into a frenzy, and kept them there. A dizzying synthesis of throbbing krautrock and modern dance beats with a dollop of rock sensibility atop it all, Moon Duo delivered an impressive set.

Brandt Brauer Frick Ensemble
I had tentative plans to interview this German trio during Moogfest, but our schedules didn’t permit it. Still, I had the chance to spend some quality time with their debut CD Mr. Machine in advance of their late-night performance at the Asheville Music Hall. That experience didn’t prepare me for their show, however. While the album is built around classical/chamber instrumentation plus analog synths, creating in the process a jazz-influenced mix that’s tough to pin down, onstage it was much more of a dance/club sort of vibe.

Looking very much like The Man-Machine-era Kraftwerk (coincidence?), the trio had their equipment set up at the stage’s front edge, allowing (no, encouraging) communion with the audience. All in all, a fun set, but I preferred their album better. With the clock indicating well past 2am, I headed home for the night. After all, I had five more bands to see and hear on Sunday.

Note: By all accounts, Stick Men and The Adrian Belew Power Trio  put on phenomenal shows that I missed. I saw them a few weeks earlier, and interviewed them. That story is here.