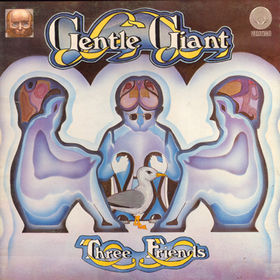 Three Friends finds 70s progressive group Gentle Giant at their most rocking and abrasive, yet the group manages to deliver a set of challenging, progressive numbers in the process. Right out of the gate with “Prologue,” the band combines the fiddly-bits melodic style that endears them to fans (and drives everyone else up the wall), but weds that fussy approach to a power-riffing delivery. It may be a misnomer to describe the recurring melodic motif in “Prologue” as a riff – it’s much more intricate and involved than that term suggests — but it’s delivered in a manner that gives it the feel of one.

A relatively dry, intimate production style puts the music right in the listener’s face. Unison playing of the melodic line puts the emphasis on some aggressive, dirty-sounding guitar work from Gary Green, and his lines are doubled and/or harmonized by Kerry Minnear’s buzzing analog synthesizer work.

“Schooldays” is built around some deft crosstalk between Minnear (on vibraphone and electric piano) and Derek Shulman on trademark acrobatic vocals. Co-producer (with the band) Malcolm Mortimore deftly delivers percussion work that’s both assertive and light (the band would finally setlle on a permanent drummer in John Weathers, who came aboard after Three Friends).

The medieval trappings that are a central part of the Gentle Giant sound are in full flower here; there’s a theatrical bent to the songs as well. In places – especially during some of Minnear’s piano-centric excursions — “Schooldays” recalls Procol Harum. But when Minnear launches into a manic vibes solo – punctuated by electric piano riffs and wide-panned stereo vocal work from Derek – the record heads decidedly (and delightfully) in a jazz direction.

The plucky guitar intro to “Working All Day” is reminiscent of some of King Crimson’s more dissonant moments, but the stomping riffage that’s the song’s centerpiece suggest an unholy hybrid of Uriah Heep and a medieval troupe of balladeers. Philip Shulman’s sax work adds a gritty dimension to the track, suggesting what Supertramp might have sounded like had they pursued a more musically ambitious (but certainly less remunerative) direction. Again it’s Minnear who steals the show, with some fine, expressive organ soloing.

Ray Shulman’s multiple-overdubbed violin work is the main attraction on “Peel the Paint.” Plucked, sawed and pizzicatoed, his fiddly bits create an airy ambience that suits the lyrics perfectly. Some super-heavy riffage comes as a bit of a shock, then, when it comes in. Sax, distorted guitar and wailing vocals work together, delivering a melody that’s all riff and little melody. If you want to evangelize some prog to a Black Sabbath fan, “Peel the Paint” is a suggested starting point. Green briefly channels Jimi Hendrix (or at least Robin Trower) in a blistering solo, the likes of which one wouldn’t expect on a Gentle Giant record. (Mortimore does his best Mitch Mitchell, too.)

“Mister Class and Quality?” answers the where-did-Kansas-get-their-ideas-from question once and for all. The band weaves a twisting, complicated melodic line, but delivers it in a stomping, gritty manner. The title track unfolds in a majestic manner, summing up all that has come before.

Like many albums of its type, Three Friends is built upon a narrative of sorts: in this case (as the liner notes relate it), the story concerns “old school friends…and whatever became of them.” Following the narrative isn’t necessary to enjoyment of the record.

The 2011 digipak reissue of Three Friends appends a live reading of “Prologue” from 1972, and some fascinating studio outtakes of “Peel the Paint” and “Three Friends” vocal parts.  The former proves – better, perhaps than did the official Playing the Fool live album – that onstage, Gentle Giant could be forceful and overpowering one moment, subtle and fussy the next, and then crushingly heavy the moment after that. And the studio outtakes are required listening for anyone who’s ever enjoyed Gentle Giant’s singular and unique brand of progressive rock.

Note: You may also enjoy my reviews of several other Gentle Giant reissues, and my interview with the band.