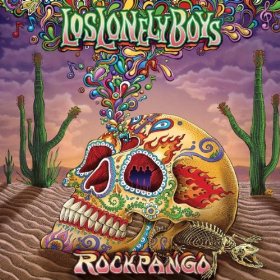 I’m told that Los Lonely Boys had a Top 40 hit in 2004 with a song called “Heaven.” I listen to a lot of music, but Top 40 radio hasn’t been on my radar screen in some years. So I missed it; never heard the song, in fact, until recently. I had heard of the group, but hadn’t gotten around to checking them out until now. I’m glad I did.

Though their new album Rockpango augments their solid power trio format with keyboards and even classical instrumentation, onstage it’s just the three Garza brothers: Henry on guitar, JoJo on bass, and Ringo on – what else – drums. Powering out a sound that draws inspiration from both sides of the border, Los Loney Boys come off as some sort of updated 21st century synthesis of the best qualities of Santana, ZZ Top and Stevie Ray Vaughan. With – and this is critical — a bit of Freddy Fender and Doug Sahm folded into the mix.

Surprisingly, the lovely, subtle arrangement of songs like “Road to Nowhere” translates well to the stripped-down loud power trio format. Without the extra instruments, these softer songs are taken to their core onstage. Rockers like “16 Monkeys” got the crowd moving this night at Asheville’s Orange Peel, and even though the live version lacked the signature clavinet part, it wasn’t missed. Henry slyly slipped in a few “Low Rider” licks, too.

These guys aren’t afraid to nod to their influences: little pieces of classic songs – usually only a lick or two – playfully popped up in solos throughout the evneing. Rockpango’s title track has a feel very close to Jimi Hendrix‘s “Crosstown Traffic” (but with a Latin vibe), and Henry Garza has the guitar prowess to take on the similarity head-on.

Often, power trios have a problem onstage: the guitarist is covering both lead and rhythm parts (and sometimes singing as well). When it’s time for the big guitar solo, the middle sonic range evaporates, leaving a big hole in the middle of the sound. (Listen to live Cream albums for an example of this problem.) But Los Lonely Boys solved this challenge: JoJo Garza expertly wielded a six-string bass, allowing him to do some chording during Henry’s solos. The sound was never less than full during their set. 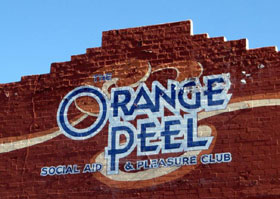 All three brothers sang; even Ringo Garza, while he was pounding away on the drum kit, executing subtly involved percussion parts while nailing a rock-steady beat. In this live setting, the band opened up some of the songs, taking longer solos and instrumental sections, occasionally involving the audience in a time-honored bit of call-and-response. Only briefly did the trio head into jam-band territory, and only then did the energy flag. In retrospect, even that worked: it gave the whipped-up audience a chance to calm down for a bit.

For the Big Finish, JoJo stood behind Henry, and played bass lines on the lower strings of Henry’s Stratocaster while Henry turned out fleet-fingered leads. The pyrotechnics were visually impressive, and it sounds great too.

A pleasing night of rock that was classic in feel yet never shamelessly retro, Los Lonely Boys put on a winning and well-received performance in Asheville. Judging by the crowd reaction – and the band’s reaction to them – I’d expect they’ll return.