Continued from Part One, in which Ann Wilson and Johnny Winter discussed their roles in the new sort-of-tribute album from Sly Stone. 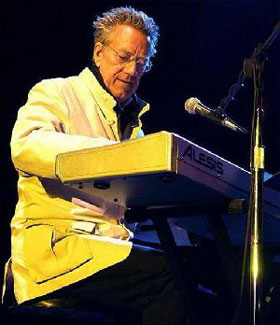 Ray Manzarek
“I used to play in a band called The Doors,” jokes the keyboardist at the start of our conversation about his part in I’m Back. We had a lot to talk about well outside of the Sly Stone project (that conversation will form the basis of an upcoming feature here), but we did cover Ray’s contribution to the new remake of “Dance to the Music.”

“You don’t set out to consciously bring something” to a session, Ray says. “Everything I play flows from the unconscious, the subconscious. I approached it from a Zen perspective; I put on the headphones, listened to Sly sing, and immersed myself in the groove.”

After joking that Vallejo, California-born Sly was the originator of the “V-sound,” Ray observes that Stone did almost single-handedly “invent contrapuntal rock.” Noting that the approach dates all the way back to the “multi-layered drumming of tribal Africa,” Ray credits Sly with combining the percussion-oriented form with rock music. A serious student of music, Ray also points out that Sly exerted great influence on – of all people – Miles Davis, especially in the latter’s work during the last decades of his life.

Consistent with everyone else interviewed for this feature, Ray says he had no dealings with Sly during this project. “Sly remains an amorphous entity,” he chuckles. “I know there’s a man out there named Sly Stone. And I’m dying to meet him. I’ve played with him, but I have not physically met the man.”

Carmine Appice
Drummer Carmine Appice has a long and storied career. He made his initial mark as a member of Vanilla Fudge, going on to brief power trio success with the Fudge’s bassist-vocalist Tim Bogert and ace guitarist Jeff Beck, and worldwide acclaim with Rod Stewart (Appice co-wrote “Da Ya Think I’m Sexy?”) By this point in my research I expected the now-standard answer to how he got involved with I’m Back: “Sly’s people rang me up,” or somesuch. But Carmine’s answer was a little different. “I do sessions for Cleopatra Records every few months,” he says. “What they do, mostly, is tribute albums.” He rattles off a list of recent projects, contextualizing his I’m Back work as just another session: “I did a Who tribute, the Sly thing, a William Shatner album…I’m not a house drummer, but I’m sort of a house rock star that they call to do some albums.” 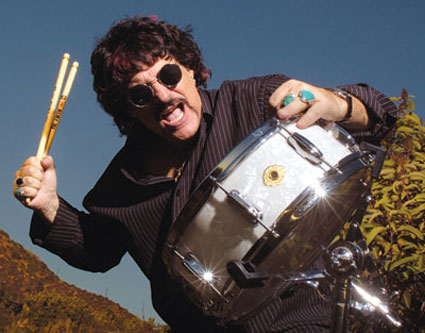 Unlike Ann Wilson and Johnny Winter, Carmine says that “I know Sly from the old days.” He even admits to some relatively recent in-person dealings with the man: “I met Sly about a year or two ago when he played B.B. King’s in New York.” He characterizes Sly as “a bit out of it. He was crazy. He did a song, and then he walked out the back door. People were clapping, and he went down the stairs, walked out and never came back. I looked at the guys in the band; they didn’t know what to do!”

When asked to lend his power drumming to a remake of “Stand!” Carmine had to ask, “Is Sly on these songs or is this just a tribute record?” Though the high-energy drum track doesn’t betray the circumstances, Carmine was recovering with an injury during that period. “I had a rotator cuff problem, so I did the track one-handed,” he laughs. The session laid Carmine’s drums atop a basic track with a reference “click track” for timekeeping. Characterizing the sessions as “piecemeal,” he nonetheless thinks the end product “came out great.” But, “I haven’t heard the finished mixes,” he adds. When I tell him that I have, he replies with a bit of good-natured sarcasm. “You have a copy? Oh. I’d love to hear it.”

Carmine is happy to share some stories from the old days. He reveals that back in the 70s, “Beck, Bogert and Appice were going to have Sly produce our second album. We went all the way up to San Francisco; we brought all our equipment and roadies and everything. We were there for about a week to ten days, and did…nothing. Because Sly was so out of it.” He notes that the whole thing cost the band about $20,000, “chasing Sly from studio to studio.” He quotes a typical Slyism from the abortive sessions: “Hey, man. Just play this groove for me. I’ll be right back…”

Reflecting on Sly & the Family Stone’s music, Carmine observes that “they were the only band with horns that was really honking and soulful. I love ‘em. And so did Tim [Bogert]. Larry Graham [Family Stone bassist] told Tim that he got his bass style – the thumb style that he came up with – from Tim.”

Bootsy Collins
Bassist Bootsy Collins’ involvement with the I’m Back album makes more sense than some of the other guest spots. Collins’ music has much in common with that of Sly & the Family Stone, and Bootsy happily cites Sly as an influence. His presence on the remake of “Hot Fun in the Summertime” helps create one of the disc’s strongest tracks. He got on board with the project the same way as everyone else – Cleopatra Records called him – and he jumped at the chance. “Absolutely! Jimi [Hendrix] and Sly were really my main heroes, besides James Brown. It’s an honor for me to be involved in doing something with him.” 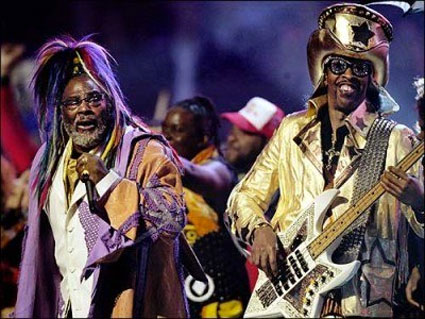 Perhaps surprisingly, a careful look at Bootsy’s long list of credits doesn’t reveal any previous sessions with Sly Stone. But they have in fact worked together before. “This is the first time something we’ve done has been released,” Bootsy says. “In 1981, we actually stayed in Detroit. George Clinton was there, too. We stayed in the studio for seven, eight months. Just recording stuff. There’s a lot of stuff that was in the can – that’s still in the can – that we recorded.”

But for his track on I’m Back, there was no face-to-face time with Sly. Bootsy’s parts were flown in. “That wasn’t my call,” he says. “If it was my call, I really would have wanted to get together and lay it out with him. Because I know how he works in the studio, and I know what he brings to the table.” Bootsy reflects on the man-behind-the-curtain approach to I’m Back. “I think it might have been Sly’s choice as well, because he’s been an inward kind of artist, I guess, after the heyday of Sly & the Family Stone.”

“I would have liked to bring more to the track,” Bootsy admits. “But because I didn’t have creative control…I had to just try and do what would get away. I would have really loved to have gotten in there and banged it out for real. I really would have liked to produce the session,” he admits. “I actually asked to do that, but by the time they got to me — as far as recording on the record – there were a lot of things that didn’t fall into place like we would have hoped.” In the end, he thinks, “we kind of fell short.” He characterizes the I’m Back project as “a step in the right direction,” but notes that the budget precluded taking it to the next level.

Still, Bootsy speaks of the elusive Sly Stone and his artistry in the present tense. “You’ve still got an incredible artist/musician/entertainer right there that everybody wants to see and hear. I just wish we could give him more props; he’s one of the groundbreakers.” 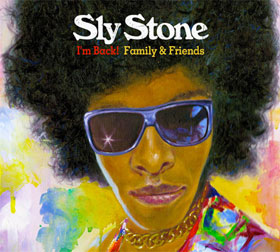 So Is He Back or Isn’t He?
The remake sessions took place in 2009-2010 in Austin TX with a pair of German producers Jürgen Engler and Chris Leitz; Sly’s level of involvement in the production is not commented upon in the liner notes. Those notes deftly skirt the issue of the development of the three so-called new songs on I’m Back, other than to note that they were “at least partially completed…on old analog tapes” between 1988 and 1989, thus hardly qualifying as new. Still, author Dave Thompson argues in his liner notes that “it doesn’t matter that even the most recent compositions on this album were written twenty years ago.”

Thompson’s lengthy liner notes make for an unfulfilling read, but this is through no fault of his. Any chronicle of Sly Stone and/or his music must, by definition, leave one frustrated. Missed opportunities, poor choices and wasted talent are the hallmarks of the man. It’s not inappropriate to mention Sly in the same breath as Brian Wilson, Syd Barrett, Skip Spence, Arthur Lee and Roky Erickson. All created work of enduring beauty and value, but all suffered from something deep inside them that kept them from fully realizing on their talent.

In total, what we have with I’m Back! Family & Friends is an album that features little or no family (Stone), and not too many friends. (Acquaintances, yes. People-he’s-heard-of, yes.) We have remakes of hit songs from Sly & the Family Stone’s classic era, redone to varying — if generally high — degrees of success. One could argue that the remakes are in and of themselves pointless, since none takes the listener higher, as it were. The three remixes are certainly pointless beyond argument, and the “new” tracks pale in comparison to the songwriting and arrangement on display within the remakes.

But if the listener is willing and able to set all of the baggage aside – ignoring Sly’s reputation, ignoring the question of just-how-involved-was-he on any of these recordings, ignoring the dubious enterprise of essentially crafting a self-tribute – and simply take the songs (except those remixes!) simply as songs, then I’m Back! Family & Friends is a damn fine album. Those are an awful lot of ifs, however, and the listener’s enjoyment of this — Sly’s latest of comebacks – is wholly dependent on the ability to embrace those conditional statements.