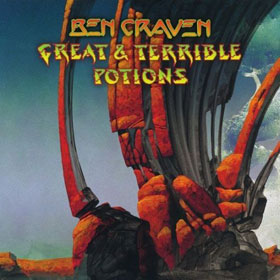 The sound of a heavy door creaking open…deliberate footsteps across a wood floor…the sound of an antique clock being wound. Those form the opening to Ben Craven’s “Diabolique,” the opening salvo on his modern progressive rock album Great & Terrible Potions.

Now, when I write “modern,” I do so referring only to the date of release. There’s little that’s modern-sounding about this album. Thundering bass lines, athletic runs across the keyboard, string arrangements that swoop and dive…those are merely some of the sonic elements at work here.

For some readers, that in itself will be recommendation enough. But for everyone else, there’s much more on offer here. Craven’s one-man-band production is a prog opus for the 21st century. With a radio-ready voice and a knack for melodies, Craven has crafted a record that can sit proudly on a shelf alongside your favorite prog classics of the 1970s.

Intrepid listeners will pick up on all manner of sonic cues strewn across Great & Terrible Potions. A bit of Emerson, Lake and Palmer here (especially in some of the lightning organ runs), a dollop of Pink Floyd there (most notably in the very David Gilmour-like soaring lead guitar lines of title track). In fact, the Floyd connection is overt: Craven notes that the instrumental track “The Conjurer” is dedicated to the memory of Richard Wright. And it’s a fitting tribute, with echoes (heh) of “The Great Gig in the Sky” and “Marooned.”

Plenty of lovely acoustic guitar picking and subtle string-and glockenspiel arrangements adorn the record. Long passages are instrumental, but plenty of vocals are woven into the mix. And on that score — as well as many others – Craven is unapologetic about writing and singing lyrics like “Fox among the flocks of Gilead” and “Essence of pixie dust helps you soar ever so high.” As he notes on his Facebook page, “Potions is dense, complicated and unashamedly pretentious — everything a good prog rock album should be!” And so it is.

Three bonus tracks show that in addition to his skills as writer, performer and producer, Ben Craven is a knowing, judicious editor. Single edits of thee of the main album’s songs show that he can join separate parts and/or pare down long tracks to create radio-ready style tracks. The single edits distill all of the tracks’ best (and hookiest) elements into three-plus minutes, and do so without robbing them of the characteristics that make them interesting.

If there’s anything disappointing about Great & Terrible Potions, it’s the double-edged sword nature of its being the creation of a sole individual. On one hand, prog fans should be thrilled that a musician working in the 21st century can produce a work of grandeur such as this all on his lonesome (and, it should be noted, without the “assistance” of a major label). On the other hand, there’s a bit of sadness that comes with the realization that there isn’t a group of four or five stringy-haired men somewhere (Brisbane, Australia, as it happens) creating this stuff, with plans to embark on a tour of world musical domination.

The packaging merits mention. It takes some serious moxie to commission Roger Dean to create your album art; choosing the artist whose work is so closely associated with Yes is simply begging to have your music compared to that of the prog-rock legends. Looking like the petrified ribcage of a colossus marooned on the Martian landscape, Dean’s painting is successful at evoking the mystical, mythical and otherworldly ambience that any progster would wish for. Dean’s distinctive lettering work only adds to the album’s similarity to the packaging of a Yes album; in fact Great & Terrible Potions looks more like a Yes record than does Yes’ own latest, Fly From Here (also sporting Dean’s artistry). As a nice bonus — and a throwback to the days when we could wrap those gatefold artworks around our head while the record spun – the tray card unfolds to reveal a 9½”x14” of Dean’s cover art.

Great & Terrible Potions aims for a wide-screen style, and delivers on it. This is music designed to be a soundtrack for visions in the listener’s head, and the slyly reverbed guitar licks in “Nobody Dies Forever” are begging for the Broccoli franchise to get their act together, film that next Bond movie and use Craven’s song as the theme. And in case anyone doubts that’s Craven’s goal here (even if he means it in half-jest), the liner notes end with a riff on a familiar end-credits message: BEN CRAVEN WILL RETURN.” Here’s looking forward to it.