John Wetton has an impressive pedigree. Depending on what sort of musical style you’re most fond of, you may know Wetton as the bass-playing vocalist/frontman of Asia. If your tastes run more toward challenging progressive music, you may think of his groundbreaking work with what many consider the best lineup of King Crimson. If you were a headbanger in the 70s, you might have dug his work with Uriah Heep. You say that English folk-rock is your cup of tea? Family. Art-pop? Roxy Music. And that’s only part of the man’s pedigree. He’s as busy as ever these days, and Wetton’s most recent project is a new solo album called Raised in Captivity. I asked him about that – and much more – in a recent interview.

Bill Kopp: Many tracks on the new album seem to take a production and arrangement cue from your Asia work, especially in the overdubbing of your voice multiple times to give it a “Wetton chorus” sort of feel. Was that a conscious decision, to sort of follow in that proven-effective style? 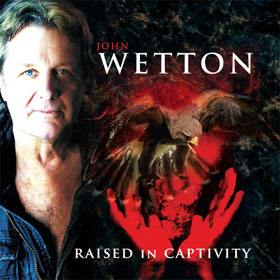 John Wetton: It’s something I did before Asia. It’s something I did way back in King Crimson, actually. Back through the sands of time; it started for me around 1972. And it’s an effect I like, the chorus. Of course, “chorus” means to sing along, doesn’t it? I kind of like multiple-layered harmonies. What attracted me to pop music in the first place — Beatles, Beach Boys – is that I’m a big fan of harmony. And the block voices of a choir; that’s where I came into music as well, through church music.

So it’s what I do; it turns me on. If it happens to be what people identify as me with Asia, it’s only [laughs] because Asia sold more records than King Crimson or my solo albums. It’s something that I do; I don’t even think about it. Funnily enough, you’re the first person to mention that. But it’s very rare that I do a vocal straight through without tracking in the chorus. It has been known to happen, but not often.

Thank you for mentioning that, because it hadn’t even dawned on me that I do that.

BK: Was the album put together in a traditional studio setting, or was it more like Steve Hackett‘s album Out of the Tunnel’s Mouth (which you played on) built piece by piece on a computer console?

JW: Well, we made it to sound like a live band. Which it does: it sounds like a group. But in fact it was just the two of us. Billy [Sherwood] played all of the drums and the guitars, and I played the bass and some acoustic guitars, the vocals and some keyboards. And somehow we managed to make it sound like it was being played by a band. Mainly that’s because Billy does the drums in one take. So it’s not sort of under the microscope. Unlike in the past where you analyze every kick drum, every fill; it wasn’t done like that. It was done where Billy played it once through. And usually that was it.

BK: I’ve long been a big, big fan of Robert Fripp’s work. I have noticed, however, that often when he guests on others’ work, his contributions — though important — are sometimes subtle to the point of being almost inaudible. On the new album’s title track, however, his distinctive sound is front and center. How would you articulate what Fripp brings to your (and others’) work?

JW: First of all, he’s a really good friend. I’ve known the guy for nearly fifty years now. And we actually get on better than we ever have done in the past. I think we have a relationship that’s grown. 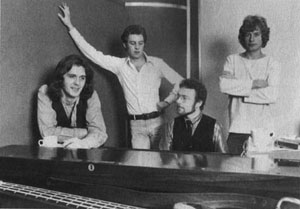 But I would not like to get any closer…I wouldn’t like to put our relationship under any further stress. A lot of people say, “Why don’t you get King Crimson back together?” He’s retired, Bill Bruford’s retired. I have a carpal tunnel in my right hand. So you’re not looking at a full ticket, y’know.

So, Robert guesting on my album — which is what he’s done on three of the albums – that’s as close as I want to get. I love the guy, and I don’t want to sacrifice our relationship. Because I know that if we worked in any closer organization, there would be a flash point.

When he guests on a song, I think he likes it like that, that he’s almost mixed out of the damn thing! [laughs] That’s the way he prefers it. I remember when he was onstage with David Bowie; he was almost invisible. I think, in fact, at one point he was invisible. He kind of likes that; he hides his light a little bit. And then, tells you afterward what he was playing.

But I love the guy, and I love what he plays. But now he’s retired; it’s kind of an end of an era. I’m glad to have some dear friends on this record.

BK: Speaking of which, every track on Raised in Captivity except the bonus track features a guest spot of some sort…

JW: Yeah, it does. We kind of engineered it like that. When I left England to go to California to record, I sort of had certain songs earmarked for certain people. These are people from throughout my career; usually the guitar players. I chose Allan Holdsworth, and when I got to California, I asked him if he would do the solo on “The Last Night of My Life.”

He said yes. But he said, “I’ve got a priority, a solo album. It’s the first one I’ve done for eleven years.” And it got closer and closer and closer to the deadline — when we had to stop recording – and I still didn’t have it. So I thought, “I’m not going to get this. And I don’t want to be overdubbing it at the mastering session!” [laughs] So, I called the guy that I was about go on tour with, Alex Machacek; he’s a good friend of Alan’s. I didn’t give him any brief; I just said, “Here’s the chord sequence; just play a modal solo, please.” Which he did. And it sounds remarkably close to what Alan would have done. It’s exactly what I wanted. Alex did a great job, and I didn’t have to wait for Alan to make up his mind whether he was going to do it or not.

I love Alan – wish him all the best — but I just couldn’t wait. We were running out of time. I had a record company barking at me, management barking at me. They were all saying, “We’ve got to have a record. It’s got to be wrapped up.” And I still didn’t have the solo. So Alex Machacek stepped in at the last minute and saved the day.

Apart from Alan, all of the other soloists were fine, and they knew what to do. I hardly had to ask them to do two takes.

BK: By my count the only bands not represented on your new record are Family and Wishbone Ash. 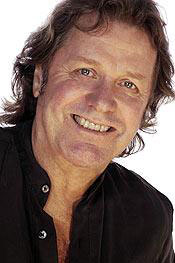 A lot of people look at my track record, my history, my CV, and point out that I pop from band to band. And in fact that was [true] only in the early seventies. I have a fairly strong work ethic. Which I share with Carl Palmer, actually. We both think that if we’re not working on a Saturday night, something is terribly wrong.

So, what I did when I first went professional, I hopped from band to band just to keep myself in work. I went from Family to King Crimson. King Crimson ended before I wanted it to…

JW: I would have liked to have been in that band for twenty years; that would have been my ideal. But it didn’t go like that. So when it ended, I was in the same office as Roxy Music. And they said, “We can’t find anyone to do this tour. Will you step in and do it?” So I did a UK tour with them, and it was great fun. They were at the height of their popularity, and there was some very high-class underwear being thrown onstage.

They’re lovely guys, and I really enjoyed myself. But musically, it wasn’t the be-all-and-end-all. So I moved on and went with Uriah Heep. And then after that, we formed UK. And that was all, really, in the first ten years of my professional existence.

And if you look at Wishbone Ash, it was just a session. It was six weeks in Miami; a nice session, but it was not a career move for me. They didn’t want all I had to offer. So when people say, “You did some hopping around,” I say that I did, but it was some high-class band hopping. That’s what I did. And then as of 1978 when UK was formed, it’s either been Asia or solo.

BK: One of the things that I especially like about the new album is that the guest spots aren’t gratuitous; they make sense within the context of the songs. Every one is better — brought more true to its core, you might say — by what the guest musician adds.

BK: In particular, Eddie Jobson‘s violin work on “The Devil and the Opera House” is a prime example. How did you approach the guest parts: did you give them demos and say “come up with something cool for this” or did you give them more specific direction?

JW: They got a demo, or they got a backing track, and they knew what the song was about. It had a guide vocal on it, and was pretty much a rough mix. They would overdub their solo onto that. In some cases I got a choice of two or three solos, but I’d very often took the first one.

They had a brief; so, on “Lost for Words,” we — and I say we because it was me and Billy – said that we really wanted a shredder on that one. Billy approached Steve Morse, and said, “We want a high-energy, street, go-for it solo.” And that’s what we got: a fantastic solo from Steve. And as you say, it adds to the track. In no way is it inappropriate. It doesn’t sound like it suddenly wandered into the studio.

Eddie Jobson, the same thing. When Richard Palmer-James, Billy and I wrote the song — it’s about an actual place in the town where I live – when we thought of the Devil, the automatic thought was: fiddle. And there’s only one person I can think of. The thought went: Devil, fiddle, Eddie Jobson. And he said, “God, am I playing the Devil again?” [laughs] And he did exactly what was required. More, really.

It seemed like there was a greater hand guiding what we were doing, at times. Everything worked out so well. There wasn’t one, really, that we got stuck on. It was fairly plain sailing. And I’m really pleased about that.