Album Review: Dino Valenti – Get Together 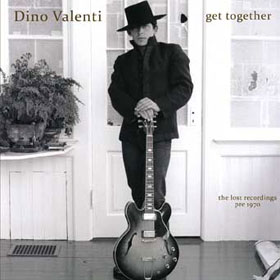 I’ve been thinking a lot lately about musical artists to whom the word mercurial applies. Rock’s history is filled with their names: Moby Grape‘s Skip Spence; Pink Floyd founder Syd Barrett; Arthur Lee of Love; Brian Wilson; Phil Spector; Joe Meek; Sly Stone. The list goes on and on. What these very different artists share (or shared) was an inability on some level to reconcile their muse, their talent, with living in the day-to-day world.

I have known the name Dino Valenti for many years. His greatest claim to fame is as composer (but not most noted performer) of a song covered by many artists, most notably the Youngbloods featuring Jesse Colin Young. That song – “Get Together” was and remains a musical touchstone of the late sixties, an apt encapsulation of the good vibes ethos espoused at Woodstock (but not Altamont). Valenti also claimed to have written “Hey Joe,” which is a story in and of itself. (Short version: he didn’t write it.)

The second most notable thing about Valenti was his membership in Quicksilver Messenger Service. He either founded the band or didn’t, depending on which account you trust. During his time in QMS he wrote a number of the band’s most popular tunes, chief among them the anthemic “Fresh Air.” That song’s composition was credited to one Jesse Farrow, a factoid that leads to the third most notable thing about Valenti: his predilection toward aliases.

The man was born Chester Powers, and Mr. Powers wrote songs. So did Dino Valenti, Dino Valente and Jesse Farrow. He was also known to use the name Jackie Powers. As you might have guessed, he — whatever his name – did some time in stir. So while Valenti was talented, he was – here it is – mercurial, and his output showed that. He was a difficult artist with whom to work, by most accounts.

A well-researched biography of the man can be found in Richie Unterberger‘s essential book Urban Spacemen and Wayfaring Strangers, a tome chock full of stories not unlike Valenti’s. A folk rocker at his core, he recorded a fair amount of material over the years, but only released one proper solo abum, Dino Valente (note the spelling).

Well, as is happily so often the case, this artist had a cache of recordings that has only recently come to light. Collected on the (unimaginatively-titled) set Get Together, these recordings were made over the period 1964-1969. Sadly, there is little information as to who is backing Valenti on these assorted tracks. We know some of the people with whom we worked at various times: Wrecking Crew bassist Carol Kaye is one. But no one is sure who’s on these tracks.

Though the songs were recorded at various times in varied locations, they possess a consistency (funny word to use where Valenti’s concerned) uncharacteristic of his work as a whole. Most of the songs are built around simple arrangements that feature Valenti and his acoustic guitar; some are folk-based, and some lean more in a rock direction. Though they were never intended as such, these tracks do form a cohesive album.

It’s important not to over-hype Get Together. It’s good stuff, and would be historically relevant even if it wasn’t all that good. But when Valenti’s son Joli writes in the CD liner notes, “This selection of songs may someday be considered the greatest folk album ever recorded,” it’s time to call bullshit. Joli’s tale of the tape is an interesting one, to be sure, but the end product Get Together is not the Great Lost Folk Album.

At sixty-eight-plus minutes (not even including the bonus disc of nine more tracks), Get Together can get a little wearying. Consistency can easily veer into sameness, and on this disc it sometimes does. Valenti was not the most wide-ranging stylist when it came to songwriting or singing. But the tunes are sturdy and interesting, for the most part. A middling cover of The Allman Brothers‘ “Midnight Rider” dates from the tail-end of the period covered, since that song wasn’t even written until 1970. (The album’s subtitle is “The Lost Recordings: Pre-1970” [emphasis mine] but let’s not quibble, shall we?)

Judged for what it is, and not held to the unreasonable standard of being some sort of Holy Grail, Get Together will make a worthwhile listen for anyone interested in the folk-leaning end of the 1960s rock spectrum.