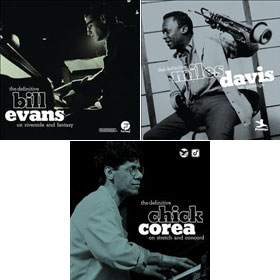 Concord is at it again, but this time with a bit of a twist. Drawing upon the increasingly deep catalogs under their control, the label has compiled several entries in the Definitive series. The work of artists for labels now associated with Concord have been collected to showcased with an aim toward providing comprehensive introductions and/or overviews to the work of Dave Brubeck, Albert King, John Coltrane, Thelonious Monk, and Sonny Rollins. Now in 2011, three more of these two-set compilations are being released.

The Riverside and Fantasy-era work of jazz pianist Bill Evans is a popular focus of Concord’s attention; several of his albums have been reissued with bonus track, including Waltz for Debby and his collaboration with Cannonball Adderley. The Definitive Bill Evans on Riverside and Fantasy takes a look at Evans’ work during the periods 1956-63 and 1973-77. (During the interim Evans recorded for Verve.)

Across twenty-five tracks, the genius of Evans’ influential style is on exhibit. Whether it’s an original composition such as the 1958 solo “Peace Piece” or an Evans reinterpretation of a standard (say, “Autumn Leaves” from 1959 with the acclaimed trio that included bassist Scott LaFaro and drummer Paul Motian), this is among the best that piano-centric jazz has on offer. Even on the pianist’s more abstract work, his ineffable sense of melody shines through.

Reliably informative liner notes from Doug Ramsey are enhanced by color reproductions of relevant album covers from Evans’ work, and track information is detailed (a hallmark of Concord reissues). For the Evans novitiate, The Definitive Bill Evans on Riverside and Fantasy is a solid entry point, one that will likely lead to further purchases. Luckily, the folks at Concord are ready to help the jazz consumer with that.

Miles Davis is a slightly tougher cat to pin down. The nature of his work changed wildly as he pushed forward and sideways in his musical explorations. The Definitive Miles Davis on Prestige centers on a relatively short timeframe: 1951-56. Davis was prolific during that five-year period, releasing more than a dozen album under his own name, not to mention working as sideman on a half dozen releases by other artists. So distilling a definitive collection down to two-plus hours of music across a pair of CDs is no easy task.

But again Concord does an admirable job. A giant in the jazz world, Davis’ stature is such that many of the selection here are obvious ones. A high proportion of the tracks on this set are taken form his Quartet and Quintet albums. As is the case on the Evans set discussed above, the Miles collection includes a sampling of both original works and interpretations of others’ music. Highlights are (of course) myriad, but two standouts among many are “’Round Midnight” from 1956 with the Modern Jazz Giants and “My Funny Valentine” from the Quintet. (Both tracks were cut in the studio on the same day – October 26, 1956 – but ended up on different LPs. The lineup differs only in the addition of tenor saxophonist Coltrane on the former.)

With a roster of players that includes Art Blakey, Coltrane, Milt Jackson, Philly Joe Jones, Monk, Max Roach and Sonny Rollins (among many others) this is a can’t-go-wrong collection. The sound is impeccable, the music is blowing, and Ashley Kahn’s liner notes provide enough details for the aficionado, balanced with enough overview for the listener less well-versed in Miles Davis.

Most of the Concord Definitive collections up to this point have focused on artists who did most of their (Concord-relevant) work in the 50s; the Albert King set of Stax material covered a later period, and part of the Brubeck set covered some 80s output. So here’s the aforementioned twist: with The Definitive Chick Corea on Stretch and Concord, the label – for the first time in its Definitive series – addresses the work of a more (chronologically) modern jazz artist.

While pianist Chick Corea had been recording from some years, he started his own label (Stretch) in 1980. The title track from his Stretch debut Tap Step is the earliest track here. It showcases one of Corea’s many talents: the ability to incorporate modern keyboard (electric pianos, clavinets and synthesizers) into modern jazz. That he does so without moving in the dreaded lite-jazz direction is a signpost of his talent. Built mostly around one chord, “Tap Steps” weaves an exciting series of melodies around that chord.

The list of players on the Corea collection is a who’s-who of modern jazz post 1980. A few names on hand include Micheal Brecker, Stanley Clarke, Béla Fleck, Steve Gadd, Airto Moreira and Pat Metheny. Nearly all of the tracks selected for the set are Corea original compositions, but some ace covers make the cut as well. A live solo version of “It Could Happen to You” shows that Corea doesn’t need electronics to make his musical points. A live piano duet with Hiromi, the Lennon/McCartney “Fool on the Hill” is nearly unrecognizable as a Beatles song for the full first of its seven minutes, but it’s an intriguing reinvention of the classic song nonetheless. Those less disposed to what detractors of some jazz might term “noodling” may be less inclined toward Corea’s acoustic piano work, finding his electronic exploration more compelling. But as with all of Concord’s Definitive sets, The Definitive Chick Corea on Stretch and Concord is a good introduction to the artist’s work.