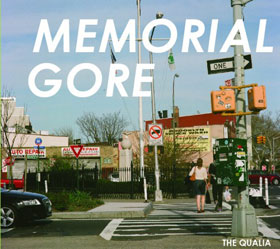 I’m not especially sentimental toward the synthier sounds of 80s pop; I had no particular use for Human League when Dare came out, and it hasn’t grown on me in the ensuing three decades. But the glitchy synthesizers of that era, existing as they did in a world of technology transitioning from analog to digital – are not without their charms. To my ears, this is most often true when those keyboards are worked into arrangements that feature other more (relatively) organic instruments, Like, y’know, electric guitars.

Strong songwriting helps, too. When done well, music of that era/style has worn pretty well. Enough so that it has exerted great influence on some modern artists. Case in point is Memorial Gore from Brooklyn-based The Qualia. Six tracks of 80s style goodness, Memorial Gore will remind you – if you needed reminding — why The Cure and New Order were pretty damn fine bands after all. “Guess I Lied” distills all of the Big Hair Decade’s best musical qualities, creating the sort of track that would be in heavy rotation in some alternate universe where MTV still played music (and that music fit the style of “Video Killed the Radio Star”-brand pop).

“Triple Crown” adds some fuzzy guitar to the mix, laid atop a throbbing synth line and some chorused vocals that sound like Gary Numan with just a hint of humanity. Some dramatic synth work and a stop-start heartbeat thrum add interest. “Word Gets Around” has a loping, sidewalk sort of beat and a poppy melody. “Keep It Coming” takes a strong and memorable melody and filters it through the 80s arrangement sensibility of Lars Casteen, the band’s vocalist and composer (the liners don’t get into what other musical duties he and the other three names handle; the publicist’s one-sheet does, but that doesn’t help you, now does it?).

“Fat on the Baby” takes a left turn, dropping the 80s trappings completely. The acoustic guitar and gentle vocal harmonies have more in common with Wilco than Soft Cell. A stuttering synth line eventually enters, providing some sort of connection to the other tracks on Memorial Gore, but in the end this (quite lovely) track seems almost to have wandered onto the CD by mistake. On some level, the same can be said for “Volcanoe (The Diogenes Club remix).” This track returns to an 80s style, but here it’s more of (truth in labeling) a dance-oriented mix. (Where the original mix of this song might be, I do not know). It’s okay – nice enough for what it is — but in the end, it’s more ordinary and less interesting that the songs the band mixed themselves.

In total, Memorial Gore is a promising (if resolutely backward-looking) EP that makes a strong case that good ideas remain within the context of 80s style pop.