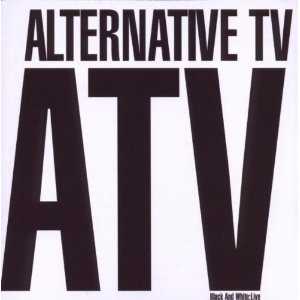 I like bootlegs. There’s something about the raw, unvarnished immediacy of a live recording that often captures the essence of a performance. Now, I understand that – for a wide variety of reasons (with varying degrees of merit) – some artists oppose the practice of bootlegging. And that is their right.

Some artists, however, embrace the warts-and-all aesthetic. They say, in effect: here it is, and you may take it or leave it. Mark Perry of Alternative TV is one of these characters. The album Black and White: Live is essentially an authorized bootleg compilation. As Perry explains in the CD’s liner notes, nearly all of the twenty-one tracks were recorded by “minidisk or the good old cassette walkman. No mixes, no overdubs, no mucking about.”

The results are impressive. Decidedly lo-fi, the tracks nonetheless convey the power of a live Alternative TV set. Stripped of artifice and polish, they present the songs in a manner that’s – when you get right down to it – close to what would have entered your ears had you been there. It’s no exaggeration to suggest that a more polished recording would have a lower energy level.

With his thick working-class British accent, Perry leads his band through what are essentially a bunch of sneering pop songs. Blasting out of the gate with the anthemic “Viva La Rock N Roll,” the band takes no prisoners. They’re not up on that stage to impress, perhaps, but rather to simply do their thing. You can take it or leave it.

The sturdy pop songs are delivered without calling much attention to any hooks they might have; instead buzzing, distorted guitar chords plow through the verses and choruses. The effect is something halfway between, say, the Sex Pistols and the Mekons. If that strikes you as a bit abrasive, best look elsewhere for your entertainment.

Those who stick around will be rewarded with a tasty assortment of ATV originals and some off-the-beaten-path covers. How else to characterize “Why Don’t You Do Me Right,” a Frank Zappa song so obscure it didn’t appear on an album until appended to the CD version of The Mothers‘ Absolutely Free? (They also cover “Plastic People” from that LP). Ditto for The Ramones’ “Now I Wanna Sniff Some Glue,” presented in a version that answers the question, “What would the Sex Pistols sound like covering the Ramones?” (Well, the Pistols if they could’ve played a bit better.)

There’s plenty of sonic variation on the disc, however; it’s not all distorted guitars. “Nasty Little Lonely” features what sounds like some spooky flute work, staking out a vibe not altogether unlike Legendary Pink Dots crossed with Black Sabbath.

Black and White: Live is a speedy trip through the history of Alternative TV; Perry sums it up as well as anyone in the liners when he writes, “Viva La Rock ‘n’ Roll – as raw as you can make it.”