In fall 2010 fall the film documentary Who Is Harry Nilsson (And Why is Everybody Talkin’ About Him)? premiered in selected cities. The film came out on DVD around the holidays, with a great deal of bonus material added. I got a chance to have a wide-ranging conversation with John Scheinfeld, the writer/director of the film. Continuing from Part One, here’s Part Two.

Bill Kopp: Watching all the interview clips that hold the film together, I’m impressed at how well they form the narrative and move the story along.

John Scheinfeld: The best way for me to describe it is this: If you go back to a birthday or a holiday when you were a kid, one of your relatives gave you a jigsaw puzzle. You opened up the box, and dumped out hundreds or thousands of pieces. And over a period of time — a week, a month, whatever — you fit the pieces together and they formed a pretty picture. The thing is, in a jigsaw puzzle, those pieces only fit together one way.

What I do, the pieces are sound bites, interviews, photographs, film clips, music. All of those things are the pieces with which I work. But I could fit those pieces together ten different ways. Fifty ways, a hundred ways. And how those pieces are fit together are what makes a film good, bad or ugly.

So if you come out of a theatre, and you say, “I did not like that movie!” then they didn’t fit the pieces together properly, and in a way that resonated with you on some level.

My goal is to put the pieces together in a way that (a) tells a story, (b) does so in a compelling and entertaining way and (c) looks like I spent no time whatsoever putting it together. Because then it has an effortless quality to it. Viewers won’t watch and ask, “Why did they do such-and-such?” They’ll just be into the story. That kind of flow is important to have in any kind of film.

BK: Successful filmmaking is the kind that doesn’t call attention to itself.

JS: Exactly. That’s how I approach an interview, too. I’ve seen a lot of interviewers who like to show how smart they are; they start debating things. When I do an interview, I know their time is precious. I ask the question and then get the heck out of the way and let ‘em talk. For a minute, five minutes; it doesn’t matter.

What happens very often — as you know — very often someone will say something that you maybe hadn’t figured on. And to be able to say, “Forget my list of questions; tell me about that” is a great thing. And in Who is Harry Nilsson and in my previous film The U.S. vs. John Lennon, that happened all the time.

BK: The list of contributing appearances is long and pretty exhaustive. Other than people who have passed on, like John Lennon, Keith Moon and Harry himself, you seem to have included anyone who’d come to mind when thinking of Harry. Were there people whom you wanted to include but that didn’t appear for one or another reason?

You sort of feel like he’s in the film, because he is [via archival clips]. But we were not able to get a sit-down interview with him. That said, he and his people were very, very helpful to us providing audiovisual material, name-and-likeness, and giving us permission to use as much as we wanted from that great movie Son of Dracula.  That had sat in Ringo’s vault since 1974. But he said, “Sure. Go ahead.”

Where the interview process came into it, we tried four different ways to get him, and what came back to us each time was that it was just too emotional for him. He doesn’t like talking in public about three people: John, George Harrison, and Harry. And so at the end of the day, we felt that we had to be very respectful of that. 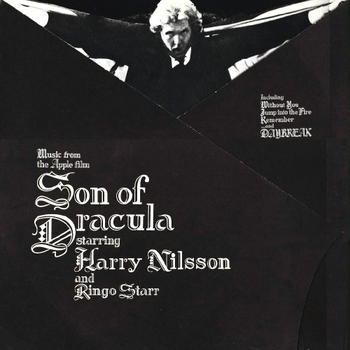 But he was great in so many other ways. And with everybody else it was easy: “Yeah, we’d love to do that.” So we pretty much got everybody we wanted.

BK: I was ten when Son of Dracula came out in theatres. So my memories aren’t super-vivid. But for one reason or another – mostly likely Ringo’s involvement – I actually paid to see the film.

JS: So you’re the one! [laughs] Not many people saw it.

BK: That, as I understand, is something precious few people can claim, having seen the movie.

JS: Where did you see it?

JS: That’s what I was going to guess. Because it only screened in three places. They did a big opening in Atlanta; Harry was there, Ringo was there. There are a couple of photographs from it in the film. Then they showed it in New York and London, and Ringo said, “That’s it.” And it never had a proper theatrical run. So you saw a very rare thing.

BK: It must have screened for a few days, because Harry and Ringo were not there when I saw it. Over the years, I’ve mentioned this to a few people, and gotten blank stares. Nobody’s heard of it: “There’s no such movie like that!”

In a lot of ways Son of Dracula seemed like a tangent in Harry’s career, more of an excuse to hang out with pals – like the Pussy Cats album with John — than to create some sort of enduring art. Is that your impression of the project or do you think there was more at work?

JS: I think it was that Ringo had an idea, Harry thought that would be fun – fun being the operative word – and they did it. Ringo found the money; I don’t know where the money really came from. There nominally was a director on it, but I think it was a bit of…hmm. Micky Dolenz talks about it; there was a lot of partying going on.

I don’t think Harry had any desire to be an actor; I don’t think that was in his skill set. Ringo, on the other hand, has proven that he has some talent as an actor.

BK: Ringo had done the Marc Bolan film project [Born to Boogie]; that was probably only about a year or so before this.

JS: Like Pussy Cats – and I think you’re right about that — sometimes when you’re a success as an artist or performer, something will come along where you get to work with the people that you love. And I think Son of Dracula was one of those projects.

BK: One of the things I saw in the film and was surprised and thrilled to see – was the Smothers Brothers talking on-the-record about the infamous Troubador incident.

JS: It is an incident in Harry’s and John’s life that keeps getting written about all the time. It seems to have become one of the more scandalous moments in rock history. So I thought it was important to take a look at what really happened that night. For example, there are a number of accounts I’ve read that actually confuse two nights and two incidents; it all sort of becomes one. It also says a lot about what was going on with Harry and John at that time. There was a lot of craziness going on. But again, I wanted to go where the truth took me.

So, May Pang, who was John’s girlfriend at the time: she was there. Van Dyke Parks: he was there. But better than that [laughs] let’s get the guys who were onstage getting heckled! And what’s so fascinating to me about that, is that it’s thirty-something years later, and Dick is still pissed about what they did that night! And Tommy – partly because Harry and John were his friends – he can look back on it and say, “Well, that was those guys.” Would he have chosen a different outcome for the evening? Yeah.

More to the point — and this is very important to me when I’m making a documentary film – my goal is to find the most rare and most appropriate audiovisual material available to tell the story. So in this case, not just generic shots of the Smothers Brothers, John and Harry. I found — after some looking — actual photographs taken at the Troubador that night.

BK: There’s a particular iconic shot, the one of Harry and John being thrown out. I’ve seen that one over and over again. And you didn’t use it.

JS: I try not to use the photos that everyone’s seen. I prefer to dig a little deeper. In Who is Harry Nilsson we have all kinds of rare photos and footage. We were granted generously by Sony access to their vault, so we have lots of photos of Harry in the studio, shots that have never been seen before. We have home movies from Micky Dolenz and Chip Douglas, and the family had material. All of this combines with the great story to really keep the audience engaged.

Harry did precious little television, so I needed all of it to illustrate things, to show him in performance. And there’s a clip in the film from Playboy After Dark.

BK: I recognized the set. Because I have bootlegs of a lot of those Playboy After Dark performances.

JS: Yeah. Hef’s always smoking a pipe, and Norm Crosby seems to always be there.

Anyway, I called up Playboy Enterprises, and explained who we are and what we’re doing. I said that we wanted to license the performances. And I dealt with this woman with a real attitude. She said, “Even if we would license you this material, it’s gonna cost you $12,000-$13,000 a minute. And you can’t afford that. So you may as well forget it.”

And I’m the wrong person to say that to. When I’m making a film, I can be…nice, but I can be relentless. I am also known in my circle for writing very passionate letters. So I wrote a Very Passionate Letter to Mr. Hefner, who I did not know. We Fedex’d it to the mansion.

About three days later we got a call from his number two person out here. “Hef got your letter. He thought Harry was a great artist. He loves his music. You can have whatever you want. No charge.”