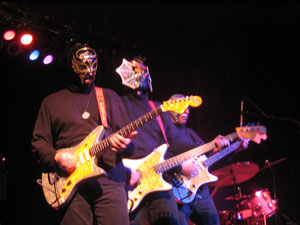 I first saw Los Straitjackets onstage in February 2004. Their music and image is – to use a Hollywood term – “high concept.” Picture this: a four piece band, all clad in matching black turtlenecks and slacks, Chuck Taylor Converse high-tops, customized medallions around their necks, and – wait for it – faces hidden behind Mexican wrestling masks.

But wait: there’s more. The band’s onstage moves are tightly choreographed. Their guitars and basses are of a matched design. And none of the band speaks to the audience…well, except for Daddy-O Grande (aka Danny Amis). But when Daddy-O speaks, he does so only in Spanish.

Shockingly, none of these gimmicks takes away from the music. In fact they all work splendidly well alongside Los Straitjackets’ high-octane instrumental rock. With a sound that is based in the twangy, sonorous tones of early 60s surf-rock, Los Straitjackets have updated that sound and tossed in all sorts of other musical influences to create something that’s uniquely their own. And it’s a helluva lot of fun, too: a Los Straitjackets concert is every bit as fun to see as it is to hear.

Formed in the late 1980s in Nashville, the band is built around the twin-guitar attack of Amis and Eddie Angel. Across several albums, the band has explored styles beyond their core approach, but they’ve always managed to bend those styles toward their own singular aesthetic. I spoke with Eddie way back in 2007 when the band released Twist Party, featuring the additional talents of “Kaiser” George Miller and the fabulous burlesque of The Pontani Sisters. In 2011 Los Straitjackets returned to Asheville NC for the first time in many years, as part of a thrilling double-bill with Blasters founder Dave Alvin. Mere hours before the show, I played a quick game of “20 Questions” with Eddie.

1. Bill Kopp: The last album from you guys was 2009’s The Further Adventures of Los Straitjackets. Is there another album in process?

Eddie Angel: Yes, we’re working on new songs; we’ll be playing them on this tour.

2. You’re kicking off a fairly extensive tour now, with dates in the east, Midwest, Canada and California. Is there a theme to these shows, or will it just be a sampling of material you want to play?

It will be a sampling of material we want to play. The theme, as always, will be: fun!

3. Will you be doing any new (as-yet-unreleased) songs on this tour?

Yes, we have three or four we are working out.

4. The band has been with Yep Roc for more than a decade. The label has established itself as something of a home for artists not treated especially well — or fully appreciated – by other labels. How did Los Straitjackets end up on Yep Roc?

We knew the owners Glen Dicker and Tor Hansen; they worked for our first label, Rounder. Our manager Jake Guralnick and Glen were partners at Rounder; they had a label called Upstart and they signed Los Straitjackets. I think we were the first or second act on Yep Roc.

5. The benefit for Danny was this week, and included Conan’s house band, longtime fans of you guys. How did you come to get to know them?

We have performed on Conan’s show eight times. They are all super guys. The benefit was amazing! [It featured] Mike Campbell from the Heartbreakers, Los Lobos, Johnny Rivers, Big Sandy, El Vez and many others as well as Conan himself singing and playing.

6. Has Danny’s illness slowed your momentum or given you a push to get out and play?

It has not slowed us. We are more motivated than ever to get out and perform. This is what we love to do.

7. Is Danny fluent in Spanish, or has he simply memorized the song introductions?

He taught himself how to speak Spanish, and he is relatively fluent. He spent a lot of time in Mexico and other Latin American countries.

8. Since Danny’s undergoing cancer treatment, I understand his temporary replacement is Gregorio el Grande. How big a musical adjustment is this for the rest of the band?

Gregorio has been an awesome addition; we can’t say enough good things about him. [He’s an] excellent musician with shared sensibilities and a good showman.

9. How did the whole visual concept develop? In 2011 it’s your trademark, but back in the late 90s it might have seemed to some sort of a random grab-bag of ideas.

It evolved over time organically. There was no master plan. We started out with just the name and masks, then Danny started announcing in Spanish. Then we added choreography…then the matching guitars and matching suits.

10. Was the ever a time – maybe during a particularly sweltering summer gig — where you said to yourself, “Boy, I wish we had picked a different theme than Mexican wrestling masks?”

11. In the early days, were the ever gigs where the audiences didn’t “get it,” where they sort of scratched their heads?

I don’t remember ever bombing. There were probably people who didn’t get it or like it but never a whole audience. I think people appreciated the fact that we were trying to entertain them.

12. Over the years you’ve stretched out in some different directions: the Christmas albums, the Twist Party record with Kaiser George and the Pontani Sisters, the Sing Along album. But you’ve always come back to the core concept. What sort of other ideas/concepts might you explore?

Well, we might do a recording that features some of our our guitar heroes, people like Duane Eddy, Nokie Edwards or Steve Cropper. Or a tribute record to the Brill Building writers or a favorite band…maybe an instructional video.

13. When did you start using the DiPinto guitars? Were those custom-designed for you guys?

No, they weren’t custom made; they’re off the rack. I can’t remember how long exactly we’ve played them but it’s been years; at least five.

14. Was the tight choreography always part of the show or did it develop over time?

It developed over time. Our friend Kaiser George from Scotland was a big help.

15. To me what you guys do is true to the original essence of rock’n’roll. With all the twists and turns that popular music has taken, what do you think is at the core of your appeal to fans?

We’ve had a philosophy from the beginning that we would always try to be fun and entertaining. We don’t take ourselves too seriously, but we’re very serious about doing the best we can, putting on the best show we can and making the best recordings we are capable of.

16. Most of the show dates on this tour are all-ages admission. Is that coincidence or is that something that you and/or Yep Roc are actively encouraging?

17. When you listen to your earlier records compared to you more recent material, do you hear a change in your approach, in terms of playing, arrangement or production?

The production is different; I think we know how to get better guitar sounds now. The playing doesn’t seem that different to me. We’re simple jungle musicians.

18. I saw you guys here in Asheville in February 2004, on a snowy night. Because of the weather the place was empty, but you still put on a great show. Afterwards you (or some of you) took off the masks and came out and spent time meeting and talking with people who hung out after the show. Was that unusual or do you often do that?

We’re always hanging out talking and drinking, except for Danny. He would never be seen without his mask on. I admired him for that, but I can’t breathe in my mask and have to get it off as soon as possible.

19. Both you and Danny have solo careers separate (but ultimately complimentary) to your work in Los Straitjackets. How do you approach these other projects to make sure they have a sound and feel separate from the band recordings?

I don’t think that’s an issue with my stuff as it is mostly vocal. But honestly, I don’t think about it much.

We have more tours and recording. I feel really lucky to be able to do this…and we’ve been doing it since 1994!

Los Straitjackets will be at Asheville’s Grey Eagle tonight (June 14 2011) with Dave Alvin.