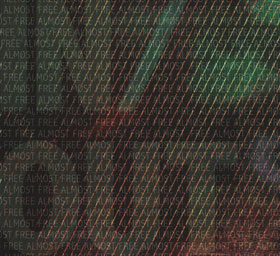 I remember the 80s. I was there. Any while some might recall big hair, shoulder pads, parachute pants and mullets, there was some very cool music. Not the MTV-centric stuff that was based more on visuals than music (Thompson Twins, I’m looking at you), but genuinely interesting bands like The Police, U2, XTC, The Smiths, REM. And lesser-known artists created some tuneful, hooky stuff as well, music that wasn’t afraid to acknowledge a debt to that which had come before.

I’m thinking about all of this as I spin In/Out, a four-song EP from Almost Free. At a shade under fifteen minutes, it’s barely a taste of what the band is about, but it’s an intriguing one. “Really Don’t Know (About You)” is built around ensemble playing from this trio. Each instrument is turning out a part designed to work within the context of the song.

Yes, it’s got hooks, but it’s not a showcase for one particular instrument. Andy Bird’s vocals are clear, and mixed high enough that you can actually hear what he’s singing about. Mumblecore this ain’t; the insistently repeated title phrase is almost a mantra, albeit one of the new wave/powerpop variety. His guitar lines have that skittering vibe that The Edge employed so effectively on early U2 albums, but the trio doesn’t really sound a whole lot like U2. Bird plays melodic riffs that mostly eliminate the need for traditional solos.

Bob Impemba holds down the bass and synth, and when it comes to the latter, he’s especially effective. The songs aren’t “synthy” in that oh-so-dated 80s way; the synth lines weave in and out of the mix, as often as not acting as a rhythmic device. “Generation Y” is the best example of the effectiveness of this approach; here they sound a bit like The Producers or The Killer Whales (go look ‘em up; both were really good new wave groups circa 1981).

Almost Free aren’t slavishly retro, either: while these four songs owe a clear debt to what we used to call college rock, they apply a modern sheen. Garren Stevens’ drumming is precise and powerful, and it too helps alleviate the need for a second guitar. On “Times We Used to Have” his playing adds shade and light to the track, punctuating the song with enough stops and starts to keep the listener engaged, while avoiding the sort of showy playing that might push the band toward math-rock or somesuch.

Impemba’s bass line on “Don’t Bother Me Now (Adultescent)” gives the song an ambience very reminiscent of The Teardrop Explodes, but the throbbing synth and power-chording guitar work help create something a bit more sweeping and grand.

And, well, that’s it. Almost Free are a band worth watching; it will be interesting to watch them develop, and to discover what they deliver on a full-length. The In/Out EP suggests it will be worth checking out.

Note: The original edit of my review referred to the disc’s title as In/Inout. I have since learned that mine was an early misprinted copy. Here’s hoping it soon achieves the mythical, collectable status of the Beatles‘ butcher cover version of Yesterday…and Today. — ed.