Imagine a big band like in the old days of Glenn Miller. Now imagine that group performing — with wit and style – a set of original songs they’ve scored for a variety of films. These films are evocative of a particular style – namely, 1970s pop culture fare – and they have evocative titles like Plurabella Strikes Again, Virus From Outer Space and L’Ocean.

The thing is, these films don’t exist. Well, perhaps they do exist, but only within the fertile mind of composer, bassist and bandleader Fred Pallem. His band Le Sacre du Tympan is responsible for this collection of music on the aptly-titled new release Soundtrax. Pallem and his group deserve to be much more well-known on this side of the Atlantic. I decided to do my small part to help, while in the process getting to speak to someone whose music I admire. Here’s our recent conversation. 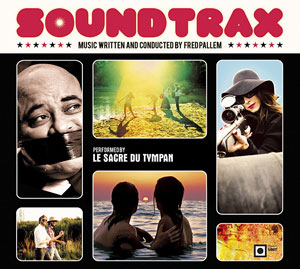 Bill Kopp: First, the name.  I don’t speak French, so I looked it up. “Le Sacre du Tympan” seems to translate literally as “the rite (or sacrament) of the eardrum.” That sounds to me like an idiomatic equivalent of an English expression that goes like “God’s gift to…[fill in the blank],” in this case, the ears. Is that about right?

Fred Pallem: Yeah, absolutely. You know “Rite of Spring” by Igor Stravinsky, well, it’s a mix between that and “Rite of the Ear.”

BK: Your music clearly draws from a number of styles. The new Soundtrax makes this explicit, but on all the albums there’s evidence of successful cross-fertilization from a several genres. And for a “big band” you seem uniquely unafraid to display a rock influence. It’s clever, inventive music that is engaging but not highbrow. It’s accessible.

FP: From the beginning of my small career, since I wrote my first songs, I liked to mix very complex music with pop music. I like it when I’ve got a simple song with weird arrangements, and strange music with a really simple melody. I like Burt Bacharach; his music sounds very simple but it’s really very complex. Aaron Copland [is that way] too.  I like it when the music comes very easy to you, and then the more you listen to it, the more you find strange things. Strange chords, strange notes…I like it this way. 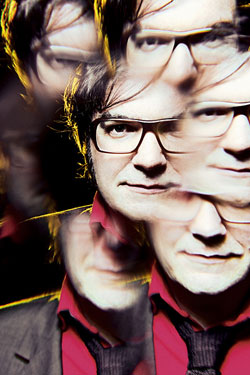 BK: Your music is like those little Russian dolls: you take it apart and there’s another inside.

BK: There’s an element of humor in the music. I’ve always thought that it’s relatively easy to convey humor in music when you use lyrics: you simply put in something that listeners will think is clever or amusing. But with instrumental music, it’s much more subtle. It’s harder to do, and I think.

BK: Of course humor is only one angle. And Soundtrax explores several. How do you go about establishing a mood in a song?

FP: It depends. For this album, I wrote a few words; you can see them in the album booklet.

BK: Yes. I laughed out loud reading that.

FP: That’s good. Sometimes I wrote a few stories like these; an image came to my mind then, and I wrote music. That’s a technique that I use, especially for this album. But it’s not really new. Arnold Schoenberg used this sometimes; it’s a way of writing music. So it’s not really new.

Sometimes I would just write an ostinato or a melody, put it on paper and leave it on my desk. And then I go back two weeks later and work on it more.

BK: The arrangements are pretty intricate, and from the clips I’ve viewed [see below], at least some of the musicians are following charts. Do the arrangements spell out every note for the players, or are they given room to improvise within a framework? 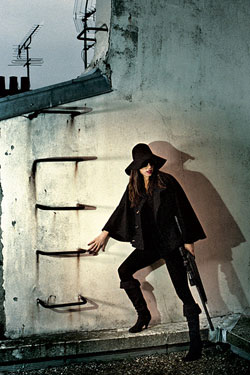 BK: I was on vacation in Montréal in summer of 2007, and I was perhaps the only person in town who did not know the city has a huge jazz festival at that time. I was lucky enough to see Le Sacre du Tympan on two successive nights. I had never seen or heard anything like that onstage. How rare was that North American performance?

FP: That was the only one. I would like to go back; I hope, next year.

BK: So that was the only time the band has played in North America?

BK: I hear all manner of influences in your music. One name that comes up whenever I read about you and your music (and sadly much of it is in French, and thus of no help to me) is André Popp. In the US he is not well known; if he’s known at all it’s as the composer of “Love is Blue.” Can you tell me a bit about him specifically what inspiration you draw from his music?

FP: André wrote a masterpiece in the fifties called “Piccolo Saxo et Cie.” It’s a story about the instruments of an orchestra speaking. And it’s a way for children to learn instruments. This album was in the house when I was a kid, and I always listened to it. A lot of people who like me are forty years old now [listened to this]. One day I decided to meet him. I liked his writing and his style of arrangement because (as I mentioned before) he liked to mix complex and easy melodies. He’s really influenced by Olivier Messiaen; he learned music with him. In a simple song like “Love is Blue” you can hear strange things [similar to the style of] Messiaen. So Popp is like my musical grandfather. 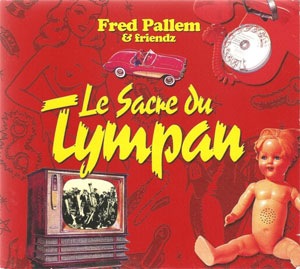 BK: To me the idea of Soundtrax is a logical progression for you. I think it’s brilliant the way you have created these nonexistent films and written music evocative of the styles of films. With the packaging and the booklet, it’s a perfectly realized and executed concept. But have you done any actual soundtrack work for any real films?

FP: In France, yes. And in Las Vegas there’s a show called Crazy Horse [at the MGM Grand]. It’s a famous show in Paris; it has nude girls.

FP: I wrote music for Crazy Horse in Paris. And some of my music is playing in Crazy Horse Las Vegas. If you go to Las Vegas, just think of it. Me, I don’t like Las Vegas. But I was happy to hear my music here.

BK: Your music is not easy to find in physical format here in the USA. On Amazon, for example, import copies of the first album (2002’s Le Sacre du Tympan) are available but they are quite expensive. The next three, including Soundtrax, are unavailable. Is this due to your concentrating on Europe as a market, or lack of finding a North American distributor interested in the band’s music?

FP: Of course not! I don’t focus on Europe. It’s not easy for a band like us. If I want my album in the United States, I need to [do] concerts there. If I want to [do] concerts in the United States, you need to find my album. It’s the same in Germany, Spain, Italy, all over the world. It’s really complex. It’s not so easy. So if you know someone who is interested, I’ll be glad to meet him.