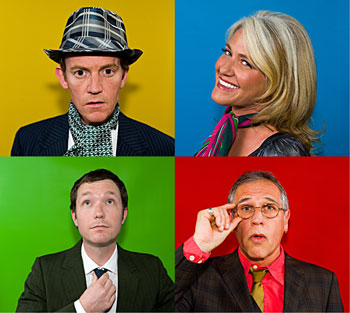 Mark Casson and Shannon Hines Casson – the husband-and-wife musical team leading The Cheeksters — clearly aren’t originally from around here. Mark’s British accent and Shannon’s Memphis lilt make it clear that the pair have, like others before and after them, made a conscious decision to settle in Asheville NC. And they’ve developed the trademark Cheeksters sound by combining influences from their places of origin into something original. Still, Mark Casson chuckles, “Some would say my influences are quite obvious.”

Mark and Shannon moved from Nashville TN to Asheville in 2000; by that point the pair had already released three albums as The Cheeksters; then as now the studio version of the group features Mark (vocals, guitars, keyboard and more) and Shannon (bass guitar, vocals etc.) plus producer/engineer/multi-instrumentalist Brent Little. All of the group’s albums since 1997 have been recorded at Little’s Cream Puff Recorders in Nashville. “We feel like a lot of magic happens there, says Casson. The group’s sixth and latest long player, The Golden Birds, got official release on Saturday May 7 2011, with a release party at Lexington Avenue Brewing.

The Cheeksters sound combines elements of Memphis soul and R&B with classic Britpop stylings; imagine the Small Faces fronted by a young David Bowie and Dusty Springfield. But the group avoids stuck-in-amber retro pandering, preferring instead to focus on songcraft and straightforward, catchy arrangements. Their 2005 song “The Neighbourhood Kids” enjoyed a high profile thanks in part to its use as a soundtrack for a heavy-rotation TV commercial for Asheville’s Ananda Hair Studio.

That sort of radio-friendly approach has served The Cheeksters well; last year the title song from their 2007 album Movers and Shakers was picked up for use on a series of NFL Network commercials. Casson describes The Golden Birds as “very much in keeping what we’ve done before, but it’s the next logical step forward for us.” He believes that over the years The Cheeksters “have improved as musicians, and have got better at making records.” And while Casson might sound old-school in his description of a collection of songs as a record, in fact there are tentative plans to release the album on vinyl later this year.

“The title The Golden Birds comes from a children’s book I read,” Mark says. “When the children in the story go into a dark wood, they would hear the song of the golden birds, and be changed forever. The fantastic imagery made an impression on me.” The songs on the record are in turns melancholy and upbeat; with its riffy dialogue between electric piano and electric 12-string, “Why Don’t You” could have fit nicely on the Help! soundtrack. “Mr. Witchall” has the feel of a sunny afternoon at Piccadilly Circus. The gurgling Hammond organ and air-raid siren that anchor “The Sleepers” provide a dreamy counterpoint to bouncy, anthemic cuts like “Thrill of a Lifetime.” And on “How Do You Feel Now” Casson and band channel a slinky, soulful Motown vibe.

“There’s a lot of variety on this record,” asserts Casson. That’s evidenced by the lounge-flavored sunshine pop of “Brand New Way” and Shannon’s lead vocal spotlight “Reach You,” with its musical arrangement reminiscent of Sticky Fingers era Rolling Stones.

“I actually got to play drums on a recording for the first time ever,” Casson grins. “And Shannon came a lot more into her own on this record, too. Her bass playing really drives a lot of the songs, and she’s also featured a bit more vocally than on previous records.” In fact The Golden Birds features more Mark/Shannon unison lead vocals than the group has done in the past.

The performing lineup of The Cheeksters includes Jay Moye (guitars and keyboards) and drummer Michael Baker; for the release party the group will add Je Widenhouse from the Firecracker Jazz Band on trumpet and harmony vocals. Widenhouse’s presence will bring The Cheeksters’ onstage live sound closer to their analog, live-in-the-studio ambience. “Quite a lot of the solos on The Golden Birds are trumpet solos,” says Casson. “One conscious decision I made when making this record was to stick some different instruments on there, instead of having guitar solos all over the place. I love the sounds of flugelhorn and trumpet, and they seemed to make sense with the songs I had written.”

Internet radio station Asheville FM (ashevillefm.org) provided a live audio stream of the May 7 show. In addition to being a release party for The Golden Birds, the event also served as the unofficial 20th Anniversary gala for The Cheeksters.

An edited version of this feature appeared in the May 4 issue of Mountain Xpress.