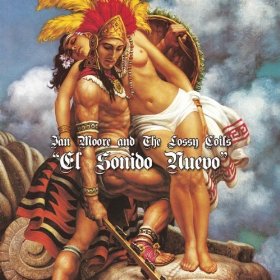 When a song kicks off sounding very much like Eddie Cochran’s “Somethin’ Else,” it gets my attention. And then when I discover that the song is instead an original — but one with the word “Secondhand” in its title — I’m amused and intrigued. Ian Moore and the Lossy Coils don’t milk that particular melody on “Secondhand Store.’” In fact the song features twin-lead vocals that feel more like Rockpile. And that rock-rootsy approach is what’s on order on El Sonido Nuevo, twelve tracks of straight-ahead, highly tuneful rock.

The slashing, martial beat of “Tap the Till” draws inspiration from the Kinks and the Clash; a subtle finger-snapping middle eight and some deft and delicate piano makes it something special. Guitarist Moore shares vocals with bassist Matt Harris; the tight yet full sound of this (occasionally augmented) trio is well-represented on the songs.

The songwriting is strong throughout the record; well-thought-out melodies feature subtle chord changes beneath the earnest and appealing vocal lines. The clean, clear aesthetic of the record gives it a feel similar to the first Marshall Crenshaw album (and one can’t do much better than that). “Belle, My Butterfly” has some jangling guitar figures (think of The Beatles’ “If I Needed Someone”) with a dramatic surf-guitar lick.

If Nick Lowe were from Texas and dialed back his wry sense of humor, he might sound like Ian Moore. At least on some songs; “”Silver Sunshine” has a stacked vocal harmony intro that’s closer (but not too close) to Brian Wilson. While melody is always out front on El Sonido Nuevo, Moore deftly mixes in home gutsy guitar work; a crunchy electric guitar riff is the basis of “Salt Mines.”  On “The Levees” Moore channels Van Morrison through a rock sensibility.

The production is intentionally very dry; there’s almost no reverb on this record. The result is an intimate feel, one more akin to having Ian Moore and the Lossy Coils in your living room than in the club down the street. That approach serves the trio well; theirs is an artifice-free, no-bullshit sonic approach. “Look Inside” incessantly fiddles around with the beat: it’s a great listen, but dancers are advised to avoid that track.

On some level it’s probably an in-joke, but Moore bookends El Sonido Nuevo with another musical cop. Having started off with a fifties rock riff, he closes the record with a track called “Sad Affair.” Both in melody and lyric, it’s, um, let’s say inspired by the heartbreakingly majestic “Holocaust” from Big Star’s Third. But as the saying goes, if you’re gonna steal, steal big.

That said, it’s a lovely song. And when a singer/writer/performer turns in an album filled with as many strong tracks as are found on El Sonido Nuevo, they deserve a pass if they nick from Eddie Cochran and Alex Chilton on a track or two.