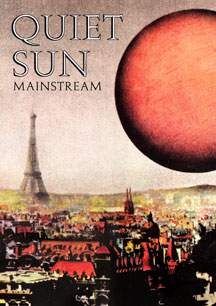 Perversely titled Mainstream, the sole release by avant-prog-jazz outfit Quiet Sun is in fact as far from that adjective as can be imagined. Recorded in between sessions for Phil Manzanera’s Diamond Head LP, Mainstream featured that guitarist’s old band, reunited to finally create the album never made during the group’s original existence. Quiet Sun broke up in 1972 when Manzanera headed to Roxy Music, but the sessions for his solo album afforded the surreptitious opportunity to create this delightfully oddball album.

Bearing sonic similarities to Diamond Head — how could it not, using many of the same musicians, engineers and studio – Mainstream is a far more unusual affair. Informed by the progressive jazz predilections of its band members — yet rooted in the distinctive textural playing of Manzanera – the album sounds like little else of its era. Imagine if Caravan rocked (a lot) harder, and you begin to get a sense of this music.

Largely dispensing both with vocals and pop song convention, the songs on Mainstream aim for the challenging end of the pool, and nearly always hit their mark.  At times the songs feel improvised, and while tracks like “Sol Caliente” move in multiple directions at once, they’re carefully thought-out pieces. Manzanera’s guitar shrieks and screams while the band engages in some tricky, jazzy playing underneath. Like modern jazz, each player’s part is inventive and worth individual attention. Like prog, there’s power and fury in much of the playing. Yet like rock, it, well, rocks.

What Quiet Sun lacks — and it lacks it in a good way – is any sort of pop sensibility. For that, listeners are directed to the excellent Diamond Head. But on Mainstream we get instead numbers like “Trumpets With Motherhood,” which sounds not unlike some sort of Carl Palmer-meets-Frank Zappa freakout. Then “Bargain Classics” gets even weirder, with Manzanera turning in some of his strangest guitar work.

Quiet Sun takes a more pensive approach on “R.F.D” but even here there’s a pleasantly unsettling vive; Dave Jarrett’s shimmering electric piano creates a moody ambience. “Mummy Was an Asteroid, Daddy Was a Small Non-stick Kitchen Utensil” is nowhere near as wacky as its title might suggest. Instead it’s a guitar skronkfest with glittering Caravan-styled keyboard runs, all delivered in an aggressive Starless and Bible Black era King Crimson style.

The highlight of “Trot” is a lovely piano solo from Jarrett. “Rongwrong” has always been an oddity among oddities: it bears almost no similarity to a same-named track from the 801 Live album; that latter version has straightforward vocals (courtesy of Brian Eno), but the one on Mainstream is, like everything else on this difficult-yet-wonderful album – primarily instrumental. Here, when the vocals do appear, they’re quite different – both in content and delivery. They’re every bit as off-kilter as the rest of the sounds coming out of Mainstream.

The 2011 reissue of this oft-unavailable record is lovingly packaged in a hardcover case, making it look a bit like an old Hardy Boys or Nancy Drew book. Now released on Manzanera’s own Expression Records label, the reissue includes a detailed booklet complete with multiple essays, review reprints, photos and miscellany. Five bonus tracks add context; an early demo “Years of the Quiet Sun” finds the band sounding a bit like very early King Crimson without the Mellotron and vocals. A modern-day recording of the band members reminiscing about the album and sessions wraps the package up nicely, finally telling the Quiet Sun Mainstream story as it deserves to be told.