Self-proclaimed living legends, Brooklyn’s Fleshtones are also affectionately known as America’s Garage Band. Their updated take on r&b and garage styles of rock’s greatest era has won them a cult of ardent and passionate fans the world over. Plying their trade since the late 1970s, the group has served up a consistent engaging catalog of albums. They had their brush with the big time in the early 80s while signed to IRS Records, and vocalist Peter Zaremba even hosted a show on MTV for a couple of seasons.

Yet in 2011 they’re still at it, producing the best music of their career. Their latest album Brooklyn Sound Solution (YepRoc) finds them collaborating with Lenny Kaye. The Fleshtones are currently mounting a small-scale tour to promote that record, and they’ll bring their “Super Rock” to Asheville NC’s The Admiral on March 24. I spoke by phone with Zaremba right before he headed to a show in Oklahoma City. — bk

Bill Kopp: On the earlier stuff, the sort of material collected on It’s Super Rock Time, The Fleshtones sound somehow straddled the mid-sixties and the early 80s. But the new material on Brooklyn Sound Solution has a vibe that bounces between pure 60s garage aesthetic and a cross between 60s and now. It seems to me that you guys have a bottomless well of inspiration and that you could keep doing this forever if you wanted to. Is that the plan?

Peter Zaremba: Well, we intend to. Yeah, we intend to keep doing this forever, because…once you understand where this music came from – y’know, what makes it click – you just keep dipping into that well. It’s not like being a purist, you know, where you have to always do the song the way it’s exactly supposed to be done. You run out of stuff that way. But if you’re inspired, then you’re doing a song from then and making it now. And I like that.

BK: As I’ve talked to people locally about the upcoming gig at The Admiral, some of them are puzzled at your choice of venues. One, they rarely have bands there at all. Two, the place holds, like, sixty people, and that’s only if you set all the tables and chairs outside. Yet, all that said, the aesthetic of the place seems completely consistent with the Fleshtones ambience. Can you tell me a little bit about the thinking that went into booking the show there instead of one of the several music venues here in town?

PZ: First of all, the band did not personally book the show. That said, we’ve never played in Asheville before. Not as far as I know. So, after thirty-five years, y’know, this might be the natural place to play. And if you think that sixty people is all that can fill it, then y’know what? Sixty people better show up! They’ll be the luckiest sixty people in town that night.

Like I always say, we play for the people that show up, not for the ones that didn’t show up. It’s like, we don’t go, “Ohhh, there could have been fifteen hundred people,” or something like that, and get all pissed off. First of all, we make sure that the people that do come have the best time they’ve ever had. Because we want to have the best time we’ve ever had. So, it starts with us. No one’s gonna get a walk-though. This might be a phone-in interview, but no one’s gonna get a phoned-in show from The Fleshtones.

BK: I watched the movie about you guys –  Geoffray Barbier’s 2009 film Pardon Us for Living But the Graveyard is Full – and that attitude comes through loud and clear.

See that? The Fleshtones: stars of film and…people write books about us, too.

BK: Lenny Kaye‘s on the new album. I am guessing that you guys knew him back when in NYC. How did he come to the project, and in what ways did his presence create something different on the record?

First of all, we’ve always been big admirers of his. Not just because of the Nuggets thing [legendary 2LP compilation of sixties garage/psych singles that Kaye put together in the early 70s – ed.].  But what he did with Patti Smith was so great. That changed things; that record [1974’s “Hey Joe” b/w “Piss Factory”] was so different from anything that was being done then. He also did this compilation of Eddie Cochran stuff [Legendary Masters from 1972] around that time. The first song that we did where we covered anybody else’s material was “Nervous Breakdown,” a song from that compilation.

A mutual friend of ours named Phast Phreddie Patterson [co-producer (with the band) of the new Brooklyn Sound Solution] – he’s a DJ, and a soul and funk expert – encouraged us to link up with Lenny. He said, “Lenny’s always been wanting to make a record with you guys.” When Lenny came in, he brought in some material; these were things that he could never, ever do with Patti’s group. Y’know what I’m sayin’? This was stuff that he wanted to do. And I have to say that Keith [Streng, Fleshtones guitarist] was really generous artistically. Because he said, “Okay, Lenny. You want to play these leads?” So Keith gave Lenny the opportunity to play all this lead guitar that he’s never played before, that Patti would never let him do. So that’s a major difference from anything we’ve ever done. 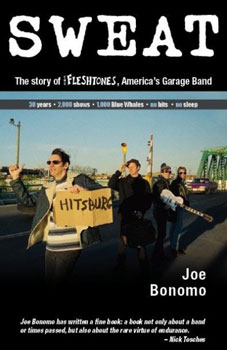 BK: I have Joe Bonomo’s book Sweat: The Story of the Fleshtones, America’s Garage Band. It’s huge, more than four hundred pages. You seem to attract creative people. You’ve had a book written about you, and the film. People love you guys. I have my own ideas about this, but I’d like to hear yours. What do you think it is about the Fleshtones that grabs people?

PZ: If I could compliment us — which I will – I think we’re kinda fresh; we’re very real, y’know? There’s an incredible amount of energy, and enjoyment of life and music. And we’re not studious about what we do. What we do is so natural. Almost anyone could do it, in a certain way. And that’s very different from what other bands do: they make one or two albums, and [by] then everyone hates each other. They all become heroin addicts or whatever. And then they quit, y’know? But after thirty-five years, we’re still very glad of our fame: it’s still gonna happen. We’re still on the frontier.

BK: With no disrespect to your earlier material, I think you guys are at the top of your game right now.

PZ: No disrespect is taken, because I agree with you one hundred percent. With a lot of the older stuff, a lot of the charm was its amateurishness. It had an almost a childlike simplicity, you might say. Now, we’re more confident in our playing, and we’re more confident in the studio. We don’t get bamboozled by fast-talking producers, fly-by-night production deals, and dazzling high technology. Blinking lights in the studio…most of that stuff doesn’t do anything, anyhow. And a lot of what it does do is negative, as far as creating live, fresh-sounding music. You can’t get dazzled by all those blinking lights and stuff; we know how to tame that stuff, y’know?

BK: Throughout your recorded history, you’ve been one of the few bands to largely avoid trendy production tricks; even on the 80s albums, there’s no Phil Collins bullshit gated-reverb drums on Fleshtones records. Has it been a conscious effort to avoid those kinds of things? 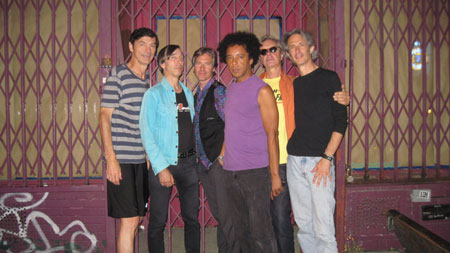 PZ: It’s down to an approach that doesn’t consider it. Although, yes, we’ve often had to consciously avoid it. We’ve had our battles with producers and engineers, sometimes to the point of violence. But that stuff has never been a part of anything we’d like. We don’t want to be responsible for recordings that don’t sound the way we like.

Of course, everyone makes mistakes. We’ve had some, some experiments that didn’t quite gel. That happens. But the fact is, I’m pretty much proud of everything we’ve ever done. And I don’t think there’s many bands that can say that: “Oh, that’s from our New Romantic period,” or something like that. Y’know what I’m sayin’? We didn’t go through a New Romantic period.

PZ: Believe me, we were under pressure to do so. The record company was definitely pressuring us to go that way.

PZ: “Can you guys do something with your hair or something? Dye it blond, or white, or somethin’…” I dunno. 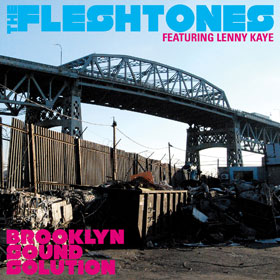 BK: I know the word is a cliché, but you guys are real survivors. Why do you think you’re bigger in Europe than here in the USA?

PZ: Okay. You know, this is an interesting question, and it does have to do with the attitudes of the public. In Europe, in a lot of the countries they don’t understand they lyrics. So they’re just going on feeling. Y’know, the feeling of the music. And if they get the emotion from the feeling of the songs, then they stick with it. If they like something, they tend to like it pretty much forever.

Now, in this country — and I think it’s a great thing about this country – this is the home of rock’n’roll, and we tend to churn this stuff out. And people always want somethin’ new, right? Now, at this point, we’ve been at it thirty-five years. And we did go through a phase of some popularity in the early 80s. Those people still like us, but it’s not like we’re gonna be the new thing.

But the paradox is, ninety-nine percent of the American listening public has not been exposed to The Fleshtones, so we still could be the next new thing. At this point, we could actually be the new thing.

BK: Look at all the bands bubbling under now that clearly draw from the same well of inspiration. You guys have influenced all kinds of bands.

PZ: We’ve positively influenced all sorts of bands. I don’t even want to embarrass myself by saying it. But they’re legion. There are many artists we’ve influenced. And for the good!

BK: What do you see as the differences between playing your music to audiences now as opposed to doing so thirty-odd years ago?

PZ: Remarkably, there’s very little [difference]. Thirty-five years ago, people really didn’t know what to expect. We still get the same thing. Like last night, we were playing and a couple of kids were goin’ crazy dancing and stuff. That kind of stuff, those are good things. And those cool things don’t change. The audience may be younger or older, but they still get down. And that’s a wonderful thing.

BK: I’ll see you next week at the show.

PZ: Yes, we’ll see you next week. And all the guys in the band said to say hello. And you’d better warn the people: if they don’t come, we’re not comin’ back. [laughs] This might be their golden opportunity. This is like buying stock in GE a hundred years ago. Go to this show.