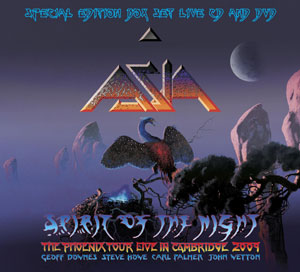 It’s difficult to know for whom exactly this release is intended. Asia’s brand of prog-meets-pop enjoyed well-deserved chart and critical success in the early 80s (the early MTV era), but when the supergroup splintered (with key members being replaced by, well, less-well-known names) and the quartet soldiered on with the same formula, the group dropped off of the radar.

Some thirty years later, Asia returned with the classic lineup and a musical approach that has remained wholly unmodified. On this live release, the group sounds exactly the same as they did on record. And quite honestly, that makes this listener a bit suspicious. While the playing and vocals are ace, they’re almost too perfect. The backing vocals in particular sound exactly the same as the record, suggesting either (a) post-show studio fiddling with these recordings or (b) some sort of live, on-the-fly triggering of pre-recorded backing vocals. (My money’s on “b”.) Either way, there’s not a hair’s breadth of difference between these live versions and what you have on your well-worn vinyl copy of Asia or Alpha (you probably don’t have the ones after that).

After a pair of songs from that record, the live show moves into some newer material. As bassist/vocalist John Wetton (Family, Uriah Heep, Roxy Music, UK, King Crimson, etc.) tells us, “An Extraordinary Life” was originally on the 2008 album Phoenix. The song has a sound halfway between early Asia and the sort of straightforward, tuneful heavy pop Wetton served up on his solo releases like 1980’s Caught in the Crossfire. So if you dig that approach (call it “timeless” or “dated” based on your own point of view), you’ll like it.

There’s perhaps a bit too much spit and polish on Spirit of the Night; the performances and recordings border on the antiseptic. To be fair, that level of fussy detail is a hallmark of Asia’s style. As such, a loose performance would be shocking and disappointing. So note-perfect playing is what you get. Lesser-known tracks like “My Own Time” slow the pace a bit, but “Open Your Eyes” will seem familiar even if you don’t know the song; it bears all the Asia hallmarks of pop songwriting and proggy delivery. Steve Howe (Tomorrow, Yes) delivers a typically soaring guitar solo.

Carl Palmer (Emerson, Lake and…) gets his spotlight on a cover of “Fanfare for the Common Man.” (Is it a cover when it’s song by one of the member’s old bands? Well, Aaron Copland wrote it, so we’ll go with “yes.”) It’s nearly a note-for-note recreation of the ELP version, as Geoff Downes (Yes, Buggles) nails the Keith Emerson synth parts, but Howe’s guitar solo adds some excitement. And while Greg Lake was (and is) a fine bassist, Wetton is a stunning one. The dueling solos are pretty nifty, and allow the players to show off their chops without getting overly indulgent.

As the show continues, the band wisely spotlights the best material from their first tow albums and the 2008 set. They wisely avoid the Asia material from periods when Howe, Wetton and/or Palmer weren’t with the band. Wetton successfully hits the soaring high vocal notes on “Here Comes the Feeling” most of the time, and when he briefly goes a bit flat, it’s almost welcome as a sign that this set was performed by humans, not robots.

Some of the songs are thin rewrites of other ones: the ironically-tiled “Never Again” from Phoenix) takes a number of sonic elements from earlier hits, betraying a formulaic approach. That said, it’s not a bad tune. “Sole Survivor” from the debut comes across perhaps best of all; with its wah-wah guitar and bracing organ, the song is more firmly set in 70s styles.

A bonus track is appended to the disc: a 2007 live version of Alpha’s “Midnight Sun” sounds quite different from the arena rock one usually expects from Asia. The subdued number lacks the anthemic qualities of Asia’s best-known material, but it’s an interesting track nonetheless. Its inclusion here is a bit puzzling, however.

Every Asia song you could possibly want is on this set; the band wraps up with “Heat of the Moment,” and if you’re of a certain age, you will – for the length of this CD — in fact “find yourself in eighty-two.”

(Note: the audio CD is packaged with a DVD covering the same material; the latter was unavailable for preview/review.)