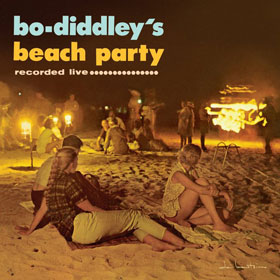 In 2011 it takes some doing to imagine a concert such as this. Here’s the scene: July 1963, Myrtle Beach South Carolina. The state known then for segregation, secession and Strom Thurmond (and these days for boorish U.S. Rep. Joe “You Lie!” Wilson) hosted a beach concert by none other than Mr. Ellas Otha Bates, better known as Bo Diddley. No, really.

The show was recorded, and has gone down in history as one of the best live recorded shows of its era. Long out of print, UMe has scheduled the re-release of this historic album on March 8 2011.

The show blows by quickly; ten tracks at a shade over thirty-seven minutes. And the CD reissue doesn’t add any bonus tracks. But as best as I can tell, Bo Diddley’s Beach Party has never been released in any digital form until now. As a slice of music history, it’s essential listening. But as it happens, the show is a barnburner, making it more than mere history.

The sound quality is quite good, and the song selection is pretty clever. Bo mixes the set up between instrumentals (“Old Smokey,” which is a rocking instro version of exactly the campfire chestnut you’re thinking of right now) and vocal-led numbers like his (non-charting) 1960 single “Gunslinger.” While most of the songs are indeed built around the “Bo beat” (a.k.a. rhumba, a.k.a. shave-and-a-haircut-two-bits, a.k.a. hambone), there’s actually a fair and surprising amount of variety within that framework.

Even though the set includes no less than three rewrites of that beat (“Hey! Bo Diddle,” “Bo Diddley’s Dog,” and “Bo’s Waltz”) the device never wears out its welcome. Modern rock fans will spot Diddley’s influence on Cheap Trick’s Rick Nielsen when they hear Bo’s version of “Roadrunner.” There weren’t a lot of electric guitarists grinding their picks up and down the fretboard in summer ’63.

Bo Diddley’s Beach Party is a case of truth in advertising: it’s most definitely a party record. And while the man’s recorded career got underway in 1955, he continued rocking late into his mid-seventies; I had the pleasure of seeing him onstage in 2003, and while he performed the entire show seated in a chair at the front edge of the stage, he had the crowd on its feel the entire time.

So transport yourself back to one of the rockingest examples of pre-Beatlemania concerts in the unlikeliest of places, and give Bo Diddley’s Beach Party a spin. It’s great; no lie.