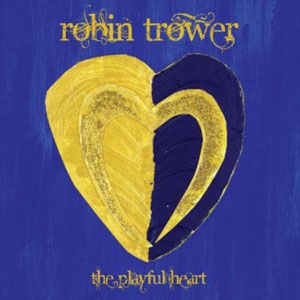 Unless you’re a serious fan of the man’s work, chances are good that your exposure to new music from Robin Trower has been minimal these last, oh, two or three decades. Trower came to prominence in the late 60s as guitarist for Procol Harum, and gained fame once he went solo. His style – very, very similar to that of one James Marshall Hendrix – was displayed front and center on a hugely successful series of albums in the 1970s.

That style didn’t change much in the ensuing years. His 1980s collaborations often took the form of Cream-like power trios; in fact one of the most successful of these was 1981’s BLT, the conveniently-named aggregation featuring Jack Bruce on vocals and bass plus longtime Trower drummer Bill Lordan.

Trower’s 2010 release The Playful Heart doesn’t really offer anything new in terms of stylistic approach, but when you’ve developed a successful style, perhaps why bother? As the famous philosopher Mike Love is believed to have told Brian Wilson, “Don’t fuck with the formula.”

Robin Trower always manages to find soulful vocalists, and this time around he reunites with Davey Pattison (from his 80s lineup) on about half the tracks; Trower – who’s developed into a pretty credible singer himself – handles lead vocals on the other half.

You won’t hear keyboard or sundry effects on The Playful Heart. What you will hear is tightly arranged guitar/bass/drum excursions. Economically played and arranged, the songs are songs; which is to say, while each includes tasty solo guitar work from Trower, the pieces are not merely wankfest showcases. Bassist Glen Letsch lays down a solid yet suitably rubbery groove along with drummer Pete Thompson (the latter also played with Trower in the 80s), and Trower waves his throaty, thickly chorded leads atop that foundation.

“The Turning” is built around a longish and memorable riff; music like this needs little more than that to be appealing. But to that Trower and his players add a propulsive, head-nodding arrangement. Trower’s carefully overdubbed backing chorus vocals add a lot of atmosphere to the song, and again there’s a searing solo.

The album is consistently entertaining throughout, but it would be irresponsible to avoid mention of “Dressed in Gold.” Though billed as an original tune, anyone who’s been within earshot of classic rock radio will recognize the tune as a very thin rewrite of Jimi Hendrix’s cover of Bob Dylan’s “All Along the Watchtower.” With so many fine songs on the record, one must wonder aloud why Trower didn’t either (a) apply his original lyrics to a different melody or (b) simply cover the Dylan song. One possible answer to (b): He’s done it once already, on a Bryan Ferry album.

“Find Me” applies Trower’s leads to a smoky, slow song that’s not quite a blues. Its understated style shows the guitarist’s command of a more subtle approach, one filled with dynamics. Trower has a welcome understanding that one need not always crank the intensity up to 11, as it were; his fluid lead ebbs and flow on this track.

On “Song for Those Who Fell” Trower cranks it up in a style redolent of Stevie Ray Vaughan. “Maybe I Can Be a Friend” is vaguely (but not overly) reminiscent of a Hendrix number, specifically Derek and the Dominoes’ version of “Little Wing.”

It’s been nearly forty years since Trower released his solo debut, and while the quality of his material dipped a bit in the mid 80s (a tough and gimmick-ridden era for many 60s/70s axe heroes, it must be said), but The Playful Heart shows the man’s talents not to have diminished a bit. More like this, please.