Steven Wilson – leader of Porcupine Tree – was chosen by King Crimson mainstay Robert Fripp to handle the work of remixing and remastering the King Crimson catalog in connection with that band’s 40th Anniversary reissue series. To date five of these albums have been released as part of this project; reviews of three of these can be found on this site: In the Court of the Crimson King (1969), Lizard (1970) and Red (1974). Late 2010 saw release of two more, the group’s second album In the Wake of Poseidon (1970) and Islands (1971). I spoke with Wilson about his work on those old tapes.– bk

Bill Kopp: With all the work you’ve been doing on the King Crimson catalog, what has been the biggest surprise for you? What have you discovered in those recordings that you perhaps didn’t know was there before?

Steven Wilson: How good 1970s recording engineers were. Because, I’ll tell you, there’s not a lot – in comparison with the way we make records now, which is with an almost unlimited amount of possibilities  — those guys were recording on eight tracks, sixteen tracks. They had a very limited amount of overdub possibilities there. You know, they couldn’t really go on an overdub fifteen guitars and make the music sound huge. 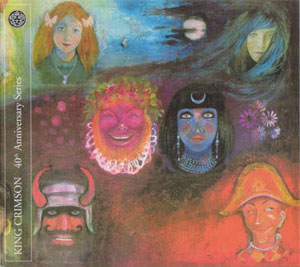 So what they did instead was they got great tones; they sounded great in isolation. And it’s almost a lost art; I’ve really learned so much about how [it’s done]. You know, some of Robert Fripp’s guitar sounds on those albums take your head off! And they’re just a single guitar. Now, these days most heavy metal bands, they multi-track their guitars four, five, six, eight, ten times to make them sound huge. But actually very often the end result is that the music gets less heavy, less powerful. Because it becomes more ‘mushy’ and kind of more congested. Those [King Crimson] albums have so much space, and yet they’re so…the contrast between beauty and brutality is phenomenal.

And it’s all about, I think, the economy of recording; a certain knowledge that I think has been lost over the last thirty years or so: of how to make great-sounding records. I’m in awe of some of the sounds on those tapes. I’m in awe of how they got those sounds, really.

BK: I was particularly fascinated to learn that for the new release of In the Court of the Crimson King you were able to go back and get the recording tracks before they were folded down. So you were able to essentially make a new finished recording from sixteen tracks, or however many it was.

SW: I think it was even more than that. The first two albums were recorded on eight-track machines. So what the band would do would be to go into the studio, and they would cut drums and basic backing tracks on one eight-track reel of tape. They would pick their favorite performance, and they would bounce that down to two tracks on a second eight-track. They would then fill up the remaining six tracks with Mellotrons and [other] keyboards. Then they would bounce that down a third time. And only then would they add the vocals, and the flutes and the saxophones. And then that would be mixed down to a stereo track. And then there’d be a fifth generation, because some of the tracks on that album are cross-faded, segued together. To do that, you have to bounce onto a fifth reel.

So the masters they’ve been using for the last forty years have been – in some cases, if you listen to the drums, the basses and the acoustic guitars – five generations [removed from the source tapes]. Everyone knows what it’s like – or at least they should do, if they’re as old as I am! – to bounce from a cassette to a cassette. Even once. Imagine doing that four, five times.

SW: Yes, it still sounded pretty good because they were using great engineers and great technology. But still, when I loaded up those original session reels, and I compared, it was clear that we were going to be able to do something that had never been done before. Which was to compile a master tape for In the Court of the Crimson King using only first-generation, pristine tape recordings. And the difference, I think, is quite clear. I think that anyone can clearly hear it.

BK: Did you have similar material to work with for the In the Wake of Poseidon reissue?

SW: Some tracks, yes; some tracks, no. I think we were very lucky with the first album. The tapes had been fairly well looked after, because it’s such a classic legacy album. The same is not true [laughs] of some of the subsequent albums. For example, we couldn’t find the tapes at all for one of the tracks on Poseidon [“The Devil’s Triangle” – ed.]. But some of the tracks, like the title track, the difference is, as on the first album, phenomenal to my ears. So it’s a little bit more of a patchwork on that album, but certainly we’ve been able to create a new version of the album which hopefully kicks any previous version out of the path. It sounds fantastic.