Album Review: The Very Best of the Rat Pack 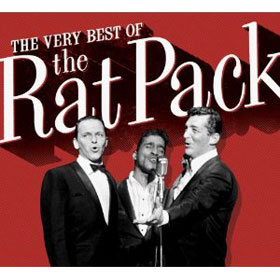 Consider this: Three entertainers who didn’t write their own material, who were in possession of a sense of entitlement that meant they paraded about town as if they owned the place, and who delivered their performances in a cocky and cavalier manner. Does that sound like a recipe for success? Or for a fun evening’s entertainment?

If the three entertainers in question are (or were) Frank Sinatra, Sammy Savis Jr. and Dean Martin, the answer is an emphatic yes. And as a matter of fact – for a number of years, the Rat Pack, as they were known, more or less did own Vegas. Or at least their particular corner of it. (The three were the singing members of the 1960s version of that social group o’guys; the other members were actor Peter Lawford and comic Joey Bishop.)

Think about it for a moment: what other city in America – save perhaps New Orleans – can have its name used as shorthand for a particular style of music? Sure, there’s Chicago-style blues, but if you just say that music is Vegas-y, there’s near universal agreement as to what you’re getting at. In 2011 Rhino compiled The Very Best of the Rat Pack, eighteen tracks of swingin’ good-time Vegasy nightclub music. All the tracks are studio cuts, but the boozy, upbeat vibe that followed the guys wherever they went is captured on every single number.

One need not be an aficionado of this kind of music to recognize most of the tunes compiled here. Even for many who came of age in the rock era, the songs on The Very Best of the Rat Pack will have a strong air of familiarity; many of the tunes are a part of the popular musical lexicon. And they certainly represent the particular style most often associated with 1960s Las Vegas.

Sinatra’s “Come Fly With Me” kicks things off in style. His inimitable vocal phrasing and the band’s impeccable arrangement effortlessly set the stage for the collection to follow. The brassy “Ain’t that a Kick in the Head” from Dean Martin swings, baby. The fluffy, playful and just a bit saucy lyrics are delivered in Martin’s creamy, romantic manner. And the band kicks into high gear during the instrumental breaks. Sammy Davis’ reading of “Too Close for Comfort” adds Latin percussion into the mix, and his trademark clearly enunciated vocal approach is showcased.

The disc continues winding its way through a collection of standards, affording almost equal time to each of the three vocalists. Unsurprisingly, Sinatra comes off the best here – he’s the Chairman, after all – but the numbers chosen to represent Martin and Davis show them to excellent effect as well.  The building excitement of Sinatra’s “I’ve Got You Under My Skin” is one of the most pleasing three minutes on the record. Its arrangement is emblematic of the Vegas big-band style.

Those sensitive to borderline misogyny should best avoid Dean Martin’s “Who’s Got the Action,” wherein the singer compares women to race horses. He and the band swing while they’re delivering that timeless message, though. Punchy horns and a propulsive bass line add drama.

Dean Martin’s “Volare” is here, as is Sinatra’s “I Get a Kick Out of You.” (Again with the kicking!) But alongside those predicable (if highly enjoyable and essential) choices are slightly lesser-known numbers like Sammy Davis’ “Birth of the Blues” (which isn’t, strictly speaking, very bluesy) and the Sammy/Dino comedy duet “Sam’s Song.” While most of the material is bombastic and flashy, Davis’ showy “Eee-o Eleven” nails the smoky bar ambience. And sweeping strings adorn Sinatra’s “Luck Be a Lady” (though for the final four of its five minutes, the song still swings aplenty).

Serious fans of the Vegas style (and/or of these artists) will have most of this music in their collections already. What they won’t have, however, is a previously-unreleased alternate take of Frank Sinatra’s “I’m Gonna Live Until I Die.” It’s a fully-formed arrangement and a typical note-perfect Sinatra vocal, but the production is dry and boxy compared to the wide-open ambience of the other tracks on the set.

The disc wraps up with a Sinatra/Davis duet reading of “Me and My Shadow.” For listeners of a certain age, the vocal arrangement is closest to the sort of numbers Stewie and Brian Griffin deliver on any number of “Road” episodes of The Family Guy. And that 21st century touchstone makes the point as well as anything: if you dig those winkingly clever showstoppers on the cartoon program, you’ll find plenty to love in the concise collection that is indeed The Very Best of the Rat Pack.

(Note: This collection has no connection to – nor in fact any overlap in material with – a 2008 import CD sharing the same title. That said, a look at the latter’s tracklist suggests that one is pretty good as well.)