The City Champs – Representing Their Hometown

In January 2010 I reviewed The Safecracker, the debut album from Memphis soul/jazz instrumental trio The City Champs. A month later I saw them onstage for a great show at Asheville NC’s Orange Peel. This fall the trio returned to town for a show, and I took the opportunity to sit down pre-show with guitarist Joe Restivo, organist Al Gamble and drummer George Sluppick. Over pizza and beer, we discussed the sophomore release The Set-up, their chosen genre, and their relationship with both the North Mississippi All-stars and the historic southern metropolis The City Champs proudly call home.

Bill Kopp: You come from Memphis, and you play a particular brand of instrumental soul music. With that backdrop, do you — even though you’re relatively early in your recording career as a band — feel any sort of responsibility, any sort of “hey, we’re a Memphis instrumental group; we’d better sound like this, or do that,” et cetera?

Al Gamble: I don’t feel like we have that responsibility, but I think it naturally comes out that way. And we certainly respect it. We love that music, and we love what we’re doing.

Joe Restivo: We definitely on this album — maybe more than on the first one — have a little bit of a nod in the direction of some Memphis music. First of all, the production style of our label and engineer Scott Bomar definitely comes out of the Memphis recording tradition. So that’s part of it. Sonically, it’s got that production vibe. But we do a song called “Crump St.” Without a doubt it’s got a nod to Booker T. There’s a long Memphis instrumental tradition between Booker T., Bill Black Combo, the Mar-keys…on and on. So, yeah. I don’t know if we feel responsible for it; like Al said, it’s just kind of part of who we are. And on “Crump St.,” it was like, “Gosh, we’d sure like to do ‘Time is Tight’ or something like that.’ But we’re a three-piece band, so it was like, ‘Let’s just write something like “Time is Tight.”‘ That’s kind of the way we do with everything. Instead of learning a Fela Kuti song, maybe we’ll do something with a Fela Kuti groove. 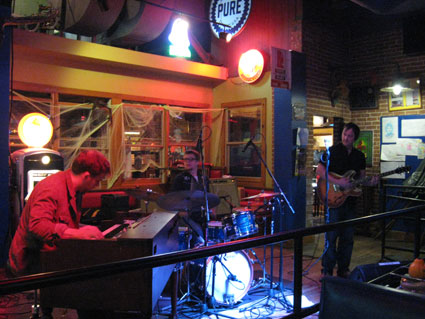 BK: Do your songs grow out of jam sessions, or does one of you bring in a sketch of a melody? I suspect the former, even though both on record and in concert — at least when I first saw you — you present tightly-structured songs, not jams.

JR: I bring in a lot of the ideas, and Al brings in songs. Generally, they’re pretty well-conceived [already]. We do all the arranging collectively; George has a really great knack for arrangement. He has a great ability to understand beats and different kinds of styles. So I might bring in a chord structure or a melody, and ask, “What would Al Jackson or Idris Muhammad do on this one?” And George might then suggest breaks, or shouts, or suggest repeating a certain part. We might try a song in several different grooves, different tempos, and then pick the one that feels right.

George Sluppick: We do the “Theme from Mad Men” on the new album. We give it a Latin boogaloo feel, though. We took the original recording home and took several hours learning the exact theme, and then we kind of unlearned it. We came up with a bunch of ideas; at one point we had a 3/4 break in there, kind of an Elvin Jones or Larry Young kind of thing. But when we settled on the Latin thing, it just clicked. Joe had the idea to bring in a really good friend of ours, Felix Hernandez, to play percussion. I had always wanted to play with him in a band setting. When we recorded that tune, it was magical.

BK: There’s a video online of the vinyl mastering at Ardent Studios in Memphis.

JR: We used the same machine this time. So it’s got the same quality as the first one. And sonically, The Set-up has a little more to it, since we used horns.

BK: You branched out instrumentally. The first album is just you three, nobody else. 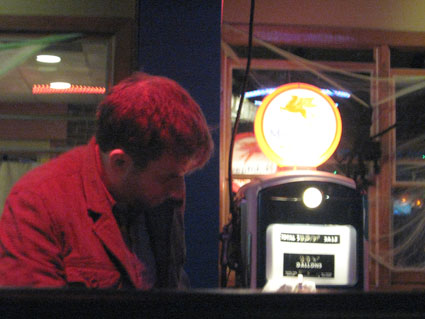 JR: the first record was kind of coming out of us playing a weekly gig with another band. All three of us were in another band called The Grip, which was a quartet. That band was kind of a pure boogaloo soul/jazz cover band; we didn’t write any material for it. George was working a lot with another group. Al and I decided to do a trio and call it by another name. So when George got freed up, we decided we should make a record. Scott had just put together his studio [Electraphonic Recording] so it was serendipitous. So when we made the first record, it was very much in the soul/jazz vein. We cut it in three days.

So, cut to a year later when we wanted to do another one. We had grown a little musically and compositionally. We wanted to add a couple more ingredients to the stew. Plus, we added some other element: Jack Ashford lives in the neighborhood, and he’s one of the greatest tambourine players in the world. He played on hundreds of Motown records; he was a Funk Brother. He was very gracious: he came down and cut five tracks with us, and then told Motown stories for hours.

We had talked about adding horns; I was a little skeptical. A good buddy of ours had done some arrangements, so we took those and whittled them down to something very minimal but yet cool. And that’s it. It’s still a trio record, but we added some things.