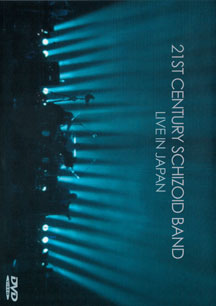 This is both a rare treat and a tease. King Crimson has long been at the forefront of music, pushing the limits of various genres, while never once looking back. While the 1999 DVD Deja Vroom had the clever interactive gimmick that allowed users to create their own time-shifting version of “21st Century Schizoid Man” — selecting a drummer from one era, a bassist from another and so on — for the most part the group’s myriad permutations have concentrated on then-current material.

The celebrated early lineup did what virtually every subsequent King Crimson lineup would do: it fell apart. By the time In the Wake of Poseidon was under way, the core group was down to Robert Fripp, with guests galore. Despite that, the sophomore album sounded (and sounds) very much a piece with its predecessor, In the Court of the Crimson King. Poseidon is due for remaster/re-release any day now.

And while the King Crimson Collectors Club has made a number of archival beat-the-boots live recordings available, nothing exists that brings state-of-the-art recording and live sound techniques together with the amazing music of those early days.

Well, actually, that’s not true at all, is it? Thank goodness for an aggregation called the 21st Century Schizoid Band. With a lineup that’s every bit as exciting to hear as it is to merely read the names, 21CSB is that rarest of animals: the original songs, played (mostly) by the original people, in the original styles. Jawdropping in its intensity, this concert recording from a 2002 date in Japan is nothing short of stunning.

Ian McDonald, all is forgiven. The pedestrian pap of Foreigner is now a distant memory, and we can once again concentrate on the immeasurable contributions you made to King Crimson. And thanks to the 21CSB we can also hear something few expected possible: live versions of songs from the equally-amazing (and even-more-unknown) 1971 McDonald and Giles LP.

For this listener, few drummers possess the subtlety and inventiveness of Michael Giles. As a member of proto-Crimson Giles, Giles and Fripp and then on the first King Crimson LP (and then on the one-off spinoff with McDonald, Giles consistently brought a nuanced, stunningly melodic approach to the drum kit. And he sang “Tomorrow’s People” on the ’71 LP. So, too, does he with 21CSB.

For this tour, the 21CSB boasted a stellar lineup: Ian McDonald on sax, flute, keys, percussion and vocals; Mel Collins (from later versions of Crimson) on those same instrument and vocals; Peter Giles on bass and vocals; and drummer Michael Giles. Rounding out the lineup was Jakko Jaksyzyk handing not only the Fripperies of those King Crimson guitar parts, but channeling some serious Greg Lake in the vocal department. Close your eyes, and (except for the 21st century sonic clarity) you’re hearing early King Crimson.

The new package is actually a repackaging of earlier releases. It contains both a DVD of the concert and a slightly shorter audio CD. Both discs survey the early catalog of King Crimson, hitting tracks primarily from the first and second albums. Also included are a couple of latter-day compositions from McDonald (cowritten with Peter Sinfield!), and some McDonald and Giles tracks (one on the CD, two on the video). It’s all amazingly filmed, played and performed, but the hands-down highlight is the heady jazz number “Cat Food.” With a shockingly intricate and swirling piano part that presages Mike Garson‘s work on David Bowie‘s Aladdin Sane, “Cat Food” is both a look-what-we-can-do showcase of the highest order and a thrilling song in and of itself.

Sadly, that’s the end of the good news. Michael Giles retired from the group shortly after this date, and though he was ably replaced by another Crimson veteran in the person of Ian Wallace, Wallace passed away in 2007. Apparently the cost of keeping the band together was too much, and the 21st Century Schizoid Band is currently inactive. Future projects are unlikely.

But for fans of King Crimson, of any of its alumni, and/or anyone with an abiding interest in boundary-pushing music of historic import, this CD+DVD package called Live in Japan is a simply must-own title.