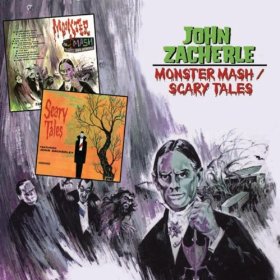 Okay, this is nutty stuff. John Zacherle (or Zacherley; nobody seems to know for sure) was a popular fixture in the late 1950s and early 60s. His shtick was pretty straightforward: dressed like a vampire or somesuch, he hosted horror films on television. Years before Mystery Science Theatre 3000, Zacherle would insert himself into the film via quick-cut. While his approach was widely imitated — by the mid sixties, every local media market seemed to have its own version of Zacherle — he was groundbreaking.

And typical of these sorts of situations where someone gains media exposure, well, he made some records. Signed to local Philly label Parkway, Zacherle put out a few albums that define the word gimmicky. But they’re fun in an innocent sort of way. Using Cameo-Parkway house producers Dave Appell and Kal Mann, Zacherle put together a bunch of nutty takeoffs on popular tunes of the day. Raiding the C-P vaults, the team in many cases simply took the backing tracks of existing hits (The Orlons‘ “Wah-Watusi” etc.) and dubbed Zacherle’s vocalizing on top of those tracks.

Zacherle didn’t sing, exactly: he pretty much spoke. “Ghoulish” subject matter transformed “Gravy” into a song about poisoning one’s in-laws (a timeless sentiment if ever there was one). Some of the stuff is pretty funny, like the misogyny-is-fun number “Hurry Bury Baby,” a ditty about what happens when you squeeze your girl too tightly.

Labelmates the Dovells (er, um, “Pistol Stomp”) are pressed into service and play along with good humor. Inclusion of a cover of Bobby “Boris” Pickett’s “Monster Mash” is inevitable, but it adds little to the original. Far better — in fact the clear highlight of the new CCM set compiling two albums — is “Dinner With Drac.” Aggressive (well, relatively aggressive) electric guitar and greasy honking saxophone make it a twisting good time.

Zacherle slips in and out of his faux “wampire” accent, but the whole proceeding is too fun to notice such minor things. When he loses the accent he sounds very much like a pro disc jockey of the era.

Collectors’ Choice has taken two Zacherle LPs — Monster Mash and Scary Tales — and combined them onto a single disc, adding a few bonus tracks. Those bonus tracks are worth noting: in a rather clever gambit, the original pressing of Scary Tales had three parallel grooves for the first track, “Scary Tales (From Mother Goose).” Depending on where one dropped the needle, you’d hear one of three distinct versions of the song. The CD includes all three. The versions resemble some unholy cross between cleaned-up dirty limericks and children’s nursery rhymes. Crazy stuff.

A fun essay from The Lovin’ Spoonful‘s John Sebastian — a longtime Zacherle fan — adds interest. It would have been nice if CCM could have gotten this one out the door in time for Halloween, but fans of nostalgia and kitsch will be glad to have these rare sides available at all.