Album Review: The Warlocks – Rise and Fall, E.P. and Rarities 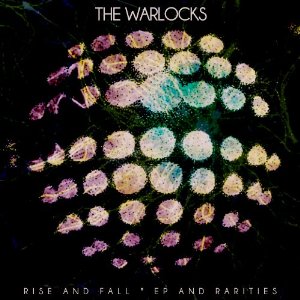 A 2005 essay written by Zoë Bower for The Pink & Almighty (reprinted in the liner notes for the Warlocks reissue/compilation Rise and Fall, E.P. and Rarities states, “…whatever you do…don’t describe [The Warlocks] as druggie, psychedelic, or garage. Especially if you’re a music critic. They hate that.”

This puts me, the music critic, in a bit of a bind. I want to wax eloquent about this compilation. And I’d prefer to do so using the musical vocabulary that I have at hand. But rules is rules.

The Warlocks were (and are) a collective of musicians that came together at the tail-end of the last century in Los Angeles. They took their influences from a wide array of sources, and in fact it is difficult to pin them down to a particular genre. Their 2001 album Rise and Fall opened with a track called “Jam of the Witches.” That number drones on for nearly fourteen minutes, and is built around a single chord. But within the seemingly tight confines of a one-chord jam, the Warlocks produce some mightily exploratory music. Tempos accelerate and slow down. Volume increases and fades. Tension increases and subsides. The melody (such as it is) twists and turns. It’s almost cinematic in its scope.

From there the band takes a serious left turn into “House of Glass,” a song that sounds like nothing so much as mid-period Pink Floyd. With its pastoral acoustic guitars and soaring slide guitar figures, the song would fit perfectly on the More or Obscured by Clouds soundtrack albums.

The Warlocks employ three guitarists: one for lead, one for lead/rhythm and one dedicated to feedback. The band lineup doesn’t quite reach Polyphonic Spree proportions, but when the Warlocks come to play, there are a lot of people onstage doing stuff. While this might suggest some sort of sonic overkill, that’s simply not the case. There’s subtlety, grace, doom and power in the tracks.

The word “jam” does rear its head frequently. Rise and Fall — represented by the first of two discs in this new collection — includes (in addition to “Jam of the Witches”) “Skull Death Drum Jam” and “Jam of the Druids.” The Warlocks EP (kicking off Disc 2) features “Jam of the Zombies” and “Jam of the Warlocks.” But honestly, the songs themselves are more imaginative than the titles. Meanwhile, with a title like “Song for Nico” (appearing in two versions: one on the album, another on the EP) listeners are provided with a pretty obvious clue where The Warlocks’ collective heads are.

One of the previously-mentioned verboten words is called to mind without even listening to the second CD. “Cocaine Blues” (not the Nick Drake song) suggest what Neil Young might have sounded like if he jammed(!) with 1970 Pink Floyd or the Electric Prunes. And I’ll leave it to others to glean the inspiration for such titles as “Dilaudid,” “Shake the Dope Out” and “Dope Feels Good.”

The songs on this 2CD set are meditative, contemplative, and heavy. There’s a timeless vibe to all of the Warlocks material on these discs; you’d be hard-pressed to nail down a specific year (or decade) of recording if you didn’t have the liner notes to help you out. The 2CD set is released on the band’s own new label Zap Banana Records. Highly recommended for those whose interest is piqued by any of the references made herein (and of course it’s a fine listen for fans of those not-to-be-mentioned styles).