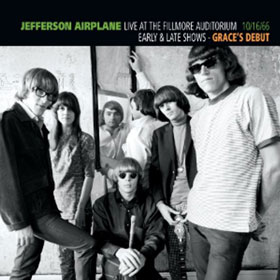 Grace Slick made her onstage debut with the Jefferson Airplane on October 16, 1966; the band played two shows the night before with Grace’s predecessor Signe Anderson. Long a mainstay of the underground collectors’ scene, this historic recording now receives official release.

Right out of the gate the band seems intent on showing the Fillmore audience that things have changed. The set list includes several songs not played the previous night. Fred Neil‘s “The Other Side of This Life” is taken at midtempo to emphasize the heaviosity of the arrangement. (HP Lovecraft — a band that took more than a few pages from the Airplane’s stylistic book — also covered the song, but their version leaned more in a bouncy pop direction.) Since instrumental interplay was always a centerpiece of the Airplane’s attack, there’s plenty of guitar soloing on, around, under and over the triple vocal lines of Marty Balin, Grace Slick and Paul Kantner.

Speaking of oft-covered songs, Dino Danelli‘s Get Together” gets the Airplane treatment in a rendition that predates many of the more well-known versions. Grace’s lead vocal parts show her unafraid to take the spotlight: while Anderson may (or may not) have been close to her equal in terms of vocal ability, Grace has that certain something — gravitas might be a good word — that demands attention in a way than Anderson did not.

“Let Me In” shows the Airplane’s pop song side, but even here they manage to plug in a high-flying and exciting guitar solo. On “Don’t Let Me Down” the band moves into blues territory, one of their less-fortunate directions. While they’re competent enough on blues-inflected numbers — such pieces do offer ample lead guitar opportunities — they’re a notch or two less exciting than the other styles the band employs. And Marty Balin often seems to be trying just a bit too hard on those blues cuts.

With its Kantner-Slick dual lead vocal, “Run Around” (originally on the group’s studio debut) foreshadows the vocal approach of Jefferson Starship. That’s not as gruesome as it might read in print: arguably, Grace’s voice blended every bit as successfully with Paul’s as it did with Marty’s. The early set closes with a straight-ahead, all-in reading of “It’s No Secret.” Everybody knows how they feel, indeed.

When the Airplane returns for their late-night set, they’ve got jamming on their minds: where the earlier set spotlighted shorter tracks, here they stretch out. Grace ably tackles her vocal parts on “Tobacco Road,” soaring above the guys, intent on making her presence known. With due respect to her predecessor, it’s not hard to imagine audience members this night playfully asking each other, “Signe who?”

A deeply strange choice of cover tunes follows. The Leiber/Stoller classic “Kansas City” is reinterpreted here as a turgid blues redeemed only by the fretwork of Jorma Kaukonen. Sure, structurally the song works as a blues, but why? It’s famously been posited that the Grateful Dead were the worst interpreters of Chuck Berry ever; a similar case could be made for Jefferson Airplane as a blues band (offshoot project Hot Tuna notwithstanding). Even as an avid Airplane fan I rate this one a snooze.

Things improve vastly with “Bringing Me Down.” Even though the song was on the group’s first album, its arrangement points the way toward later Airplane excursions. Again Grace forcefully lets us know she’s arrived.

“And I Like It” is one of the few songs reprised from the previous evening’s sets. More blues. It’s followed by “High Flyin’ Bird” (also performed the night before with Signe). Grace’s soaring harmonies complement a more assertive, impassioned performance than the band had turned in the night before. Here the Airplane proves it really is, as the song says, “the only way to fly.”

“This next thing is called ‘Thing,'” Marty Balin helpfully explains. A ten-minute exploratory piece, it’s one of the more worthwhile examples of its kind. Largely a one-chord jam, it’s nonetheless exciting. All the instruments compete for superiority throughout. The liner notes explain that the band included the number so that Grace could listen to it and figure out how she could add to it in the future. Warning to the uninitiated: there is a bass solo in the song. It’s good, but it’s…a bass solo.

The Airplane roars to the set’s conclusion with “3/5 of a Mile in 10 Seconds,” neatly bookending the pair of concerts; they had opened with this the night before (well, after “Jam” anyway). With the band taking the track a bit slower than they did the previous night, the song caps off Grace’s introduction as the new vocal-focal point of the band. After a single evening, Grace Slick is fully integrated into Jefferson Airplane. The best was yet to come.

As with the previous night’s set featuring Signe’s farewell, the tapes for this show have been a popular collectors’ item. But the sonic quality on these versions far surpasses the unofficial ones. Unlike, say The Who‘s BBC Sessions set (which compares unfavorably to the unofficial Maximum BBC bootleg), these discs render the bootlegs irrelevant. For Airplane fans — or anyone interested in the west coast sound of the sixties — these are the ones to have.