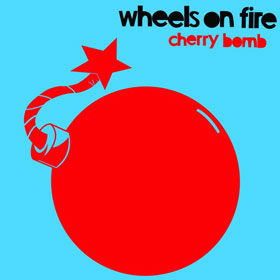 First of all, the fact that Wheels on Fire‘s Cherry Bomb EP is issued on 45rpm vinyl pushes its cool-quotient up several notches before I even get the opportunity to spin the vinyl. But on listening, it’s even better.

“Black Wave” has it all: jangling, spiky guitars, “ooh”-filled backing vocals, sneering lead vocals not miles removed from, say, the Chesterfield Kings, and that Vox/Farfisa keyboard vibe for which this reviewer has an undying love. The song itself is good too, making effective use of three chords.

“Broken Up” has a similar sonic attack that leans a bit more in the direction of the Fuzztones. Handclaps and lo-fi Chuck Berry guitar aesthetics render it a bit more true to the 60s spirit, but it too is memorable.

The title track draws inspiration from 70s glam, staking its claim halfway between Sweet and the New York Dolls. The distorted vocal treatment contrasts nicely with the relatively clean delivery of the instrumentation.

“Go Give Yer Love Away” boasts a rhythm guitar that’s just the other side of being in tune. The result isn’t annoying; it actually imbues the tracks — recorded in the band’s basement — with a campfire feel. Vocal delivery adheres to the Sky Saxon school of singing, and that’s not at all a bad thing. Tambourine, handclaps and other hand-held percussion take the place of the standard drum kit on this brief tune.

And that’s it: four songs. They (probably) won’t change your life, but the tracks on the Cherry Bomb EP are full of fun, authenticity and old-school (read: thankfully not pop-punk) energy. Worth a spin, it’ll leave you looking forward to more from Wheels on Fire.