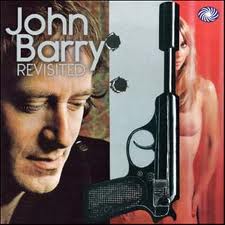 John Barry is a rightly revered figure in the world of film soundtracks. Winner of five Oscars for his work on films including Born Free, The Lion in Winter, Out of Africa and Dances With Wolves, the British composer/arranger/musician has earned and enjoyed popularity over the course of his long career. As leader of the instro-pop group The John Barry Seven, Barry even gave the Shadows — Britain’s premier pre-Beatles pop sensation — a run for their money. But it’s his work on three British film productions that’s compiled on the 4CD set John Barry Revisited.

The first disc is the original television soundtrack recording of a program called Elizabeth Taylor in London. The soundtrack features light classical/pop themes, a few of which feature Miss Taylor reciting Wordsworth or Elizabeth Barrett Browning over them. Typical of soundtrack work, themes crop up again and again; what works effectively as audio accompaniment to a film can become repetitive and tiresome on record.

Barry’s soundtrack to Zulu is the second disc in the box. Here the voiceovers are by the film’s narrator, Richard Burton. Though the film is set in Africa, there’s an odd and undeniable pop feel to many of the tracks. The Zulu theme is recast as a straight pop number by the John Barry Seven called “Monkey Feathers.” Removed from the context of the film, it’s simply an upbeat, catchy pop instrumental.

The soundtrack to Four in the Morning is suitably dreary and downbeat, as befits the film’s tale of relationship melodrama and woe. Lots of dialogue is included on the soundtrack, making this listener squirm uncomfortably while the main characters (including a young Judy Dench) argue incessantly. Worst of all, the themes are dreadfully repetitive. Verdict: effective for what it is, but not a very enjoyable listening experience.

The final disc in the set is titled The Ember Singles Plus. It includes an unusual assortment of odds and ends, chief among which are a pair of tracks credited to a Miss X. “Christine” and “S-E-X” are pop ditties centering around the Profumo Affair, something that was a big deal in England back in the day. Other singles compiled here include Barry’s work on James Bond films (though he’s never won Academy Awards for these, they do rank among his most recognizable work).

Not among the most essential of packages, John Barry Revisited is nonetheless an interesting look at the 1960s work Barry did while at the Ember label.