Home  »  essay   »   The Top Five Things I Learned at Margaritaville

The Top Five Things I Learned at Margaritaville

I’ve been playing in cover bands on and off — mostly on — since around 1980. With the exception of some years — the late 80s to early 90s — set aside to be a young married with young kids, I’ve been in one or another covers band, and have had great fun doing so. The experience of playing with other musicians is usually gratifying, even for an INTJ like myself. While bands come and go, I’ll often come out of the experience with a new pithy aphorism, such as “being in a band is harder than being in a marriage.” As it turns out, that one is true: while my (first) marriage lasted some sixteen years — a good run, actually — none of the bands has held together for a significant fraction of that time. But all were rich with rewarding experiences.

I really did learn a lot of useful things playing those early gigs back in the 80s. And with apologies to Robert Fulghum, everything I need to know about playing live music I learned in a bar called Margaritaville.

Margaritaville — absolutely no relation to the Jimmy Buffett restaurant franchise of later years — was a bar in midtown Atlanta. (As Rob Reiner‘s Mary DiBergi says about another bar — The Electric Banana — in This is Spinal Tap, “Don’t look for it; it’s not there any more.”). Located across the street from the IBM Tower (which is still there, but now trading under a different corporate name), the bar was housed in a structure originally built as a Lum’s Hot Dogs franchise. The bar had a decent sized parking lot, ample seating for revelers, and a stage for bands.

My band Remote Control played there quite a few times; in fact our final gig in May 1986 was there, mere days before I graduated from college. Not only did we make decent money — the band in those days routinely drew $800 a night; where have those days gone? — but we got free or discounted drinks from the bar. Said bar specialized in frozen margaritas, naturally. I sometimes would order a pitcher with a single straw, and set the pitcher upon my electric piano to enjoy while I played.

But we (or at least I) also gained a glimpse into the collected knowledge of the universe, five bits of which I’m pleased to share with my readers here and now, nearly a statute-of-limitations-exceeding quarter century later.

1. Jimmy Buffett is Lame Beyond Description, But People Still Request His Music.

I don’t know: I guess it was because of the bar being named Margaritaville. Even though we were a decidedly rock and roll band — playing music of the “letter bands” of the day, like REM, XTC, INXS and artists on the IRS record label — inevitably one drunken patron would always call out for a Jimmy Buffett song.

Now, in my experience, I have learned the following: Buffett’s fans consist of people who (a) own less than a dozen albums; (b) don’t like rock music in general and (c) are walking billboards for some guy named Tommy Hilfiger (or whomever replaced him in the sartorial culture sweepstakes). They also (d) drive SUVs while talking on their cell phones, (e) make day trades on the internet and worst of all (f) talk nonstop during concerts. And although they find Mr. Buffett’s music “amusing” they don’t seem to get the humor in, say, a Firesign Theatre album. So why they’d come to a bar featuring a loud rock and roll band and request “Fins” is beyond me. All I know is they did. (Picture me shaking my head very slowly here.)

2. If You Want to Sing Lead in a Band, Write Your Own Damn Songs.

The band did do a handful of original material. Our lead singer wrote songs that were pretty catchy, containing the requisite number of hooks. The songs fit in well with our overall repertoire. And he sang his songs, of course. 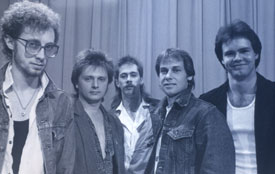 I wanted some of that special attention from the audience, too. While he played an electric guitar and was out on the front edge of the Margaritaville stage, movements constrained only by his guitar cable, I was back a bit, hidden behind two or three keyboards. (In those days, one-machine-does-it-all keyboards were still an instrument designer’s dream). And securing a lead vocal spotlight was always a hard-fought goal of mine. I did managed to grab a few songs, but in the end I discovered that what it would take was the writing of songs.

The thing is, I had no particular ability in this area. I had a fair amount of music theory in my head, but the idea of writing a song that wasn’t a transparent lift of some other song (consciously or otherwise) lay just beyond my grasp. Luckily or not, that limitation didn’t stop me. As chronicled in a post-breakup documentary on the band (one that ran on local community access cable for a time in ’86 and ’87), everyone in the band had their own ideas about our original material.

After the unseen interviewer poses the question, “Who writes the original songs for the band?” each of the five members answers in turn. The non-composing members each state simply that Michael (lead singer) writes them all. When Michael gets his turn, he pontificates at some length about his songwriting prowess, making the case that his “timeless” songs mesh well within the context of the band’s aesthetic. Pretentious stuff to be sure, but not too wide of the mark truthwise.

I got the last word. “I wrote most of the songs for this band. In fact I’ve written dozens of songs. But we only do one of them. And Michael: he’s written four or five. We do all of his.” Then I laughed, but just a little.

3. People Sometimes Can’t Tell the Difference Between Performance and Disaster.

When I joined the band, my amplifier was an early 70s Fender Deluxe Reverb amp. A guitar amp now selling in the $1000-plus range, I had bought it around 1980 for about $100. The “problem” with it was that it didn’t have enough inputs for all my keyboards. So I sold it and bought what amounted to a small PA instead. This Univox setup had two speaker columns, each containing four 10″ speakers. And the head had plenty of twiddly knobs, always a plus. The whole thing looked like Stonehenge’s little brother. 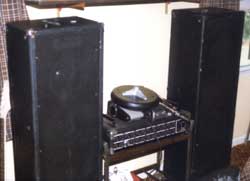 It worked pretty well, but I noticed that the head often did get a little hot. One night at Margaritaville, the thing gave up the ghost mid-set. Smoke billowed from the PA head. But I didn’t notice, not at first. But eventually, as I looked out at the packed house, I noticed a number of people looking right at me. That was unusual enough in and of itself. But they were clapping. They were really impressed.

“Wow, am I that good?” I thought for a split second. As I remembered, “No, I am not,” I smelled smoke. I turned to look behind me to see the smoke cloud emanating from the now-deceased PA head. People were clapping because they thought it was some kind of pyrotechnical effect. It was not, and I had to play the remainder of the set though the house PA, and then buy a new system the next day. The clapping was nice, though.

4. Never Bring Your Wife and Your Girlfriend to the Same Gig.

I must start by clearing up something: I learned this one vicariously. At the time I was schooled in this valuable lesson, I myself had neither wife nor girlfriend.

Our drummer, though, was a different story. Let’s call him Gumby, since that was in fact his nickname. Gumby was not the band’s original drummer: that guy had left for a better opportunity. Gumby was a forceful drummer, one of the best I have played with. He kept time like a machine, and beat the skins like a monster. But he was, shall we say, a volatile personality.

Talk about typecasting: the guy looked like a barroom brawler. A few years my elder, he had teeth that looked like broken bottles, and there were rumors that he had done serious time (not just overnight jail visits). We never verified these rumors; honestly we were to afraid to ask. In retrospect it’s difficult to understand why we brought him into the group; the rest of us were relatively mild-mannered suburban types. In fact the only band members who did any serious “partying” were the lead singer and, um, one other guy. (Never mind about that; I’m telling a story here.)

Gumby had some trademark sayings. If you said or did anything not to his liking, he’d respond with “I’ll cut ya,” and he while he never delivered on that threat, he seemed not to be kidding. Another favorite of his was this ditty: “I’ll tear off your head and shit down your neck.” Nice.

Oddly enough, Gumby was something of a ladies’ man. So it was that he took up with a young student attending something called Bauder Fashion College. That was a school — housed (appropriately enough) in the basement of one of Atlanta’s ritziest shopping malls — where, I think, young women went to learn how to put on makeup and whatnot. It was also — natch — a shooting-fish-in-a-barrel hunting ground to meet lovely young ladies. (Or so I hear; again, this story’s not about me so much. So never you mind.)

The problem with all that is that Gumby had a wife at home. And she was possessed of a demeanor, it must be said, quite similar to that of her spouse. So when Gumby made the tactical error of inviting both wife and girlfriend to a Margaritaville performance, mayhem ensued.

That mayhem took the form of a fistfight between Mr. and Mrs. Gumby. And if that weren’t bizarre enough, the chosen venue for this fight was the stage upon which we were playing. During a break in the music, the pair were up there, fists flying. Eventually the fight worked its way out the door, where, as our lead guitarist so pithily put it, “Gumby remodeled the parking lot.”

5. Just Because a Girl is at a Bar Doesn’t Mean She’s of Legal Age.

Let us all simply agree as to the wisdom contained in this statement, and leave the details undiscussed, shall we? But trust me on this one: it’s a good lesson to learn, and learn quickly.