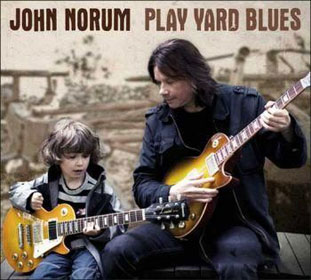 I’m not afraid to admit that I have no use at all for hair metal. I find it totally lacking in substance, full of posing and posturing, and frankly more than a bit silly. I make a point of avoiding it. So had I known that John Norum is (or was and is again) the lead guitarist in Europe — the group responsible for “The Final Countdown” — then the advance copy of his new album Play Yard Blues would have most likely gone in my huge “no” pile.

The loss, frankly, would have been mine. Play Yard Blues is a blues-rock album in the tradition of Rory Gallagher and, say, Joe Satriani’s G3 projects.

Opening with the sound of thunder and a riff that grew up in the same neighborhood as “If Six Was Nine,” the Swedish guitarist’s “Let it Shine” sets out the album’s territory early and effectively. The verses feature a lead guitar that closely tracks the lead vocal line; the choruses add a harmony vocal. And the bridges display some Robin Trower-styled soaring leads. While Norum’s voice isn’t as strong as distinctive as Jack Bruce‘s (but whose is?) his singing does imbue the track with a feeling similar to Trower’s BLT albums.

On “Red Light Green High” the title might not make loads of sense, but the tune rocks. Here it’s the bass guitar that follows the lead vocal for a sort of Mountain-ous vibe. Subtle use of ride cymbal and “oh-oh-oh” vocals give the track just enough swagger. Listeners well-versed in the rock aesthetic will say to themselves thirty seconds in, “Here comes a wah-wah guitar, Ill bet.” And so it does, but there’s nothing wrong with that. It’s actually not the main solo, though. That brief exercise brings to mind Eric Johnson.

The riff-centric “It’s Only Money” dials down the melody in favor of said riffs. The verses alternate between vocals-and-drums sections and lockstep guitar-and-bass licks. Warning: exposure to this track may result in good-natured grimacing and air-guitar solos.

Some cynical listeners may amuse themselves playing spot-the-source-melody. While none of Norum’s songs are shameless ripoffs, the title track could be subtitled “Red House (Slight Return).” The track “Travel in the Dark” finds Norum’s vocals sounding a lot like — wait for it — Lenny Kravitz. There’s a soulful swagger to the bridge vocals that really works well. The weakest number on the disc is the hyperactive, overamped “Born Again,” which tries too hard: loud fast doesn’t always rule. But that misstep is the exception among the album’s songs.

The album includes seven more songs that mine similar territory. Play Yard Blues isn’t filled to the brim with the most original music you’ll ever hear, but it’s a consistently enjoyable listen for fans of heavy melodic rock that puts the guitar out front. Unlike many albums of its type, Play Yard Blues doesn’t skimp or fall down in the vocal department, and the playing is imaginative while remaining within the confines of the chosen genre.

Refreshingly free of the faintest whiff of hair-metal, John Norum’s Play Yard Blues proves that the axeman is possessed of a much wider sonic and stylistic palette than might have been expected. Sometimes ignorance really is bliss: lack of knowledge about his Europe connection allowed me to give his solo record — his eighth, as it turns out! — a rewarding listen.