Book Review: A Wizard, A True Star: Todd Rundgren in the Studio 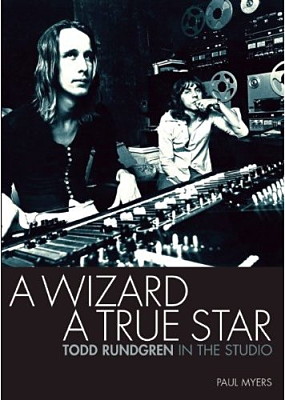 Here’s the thing: I occasionally review books, but I certainly never sit down to write a review before I’ve actually finished reading that book. It only makes sense.

Rules are made to be broken. And Paul Myers’ A Wizard, A True Star: Todd Rundgren in the Studio is so friggin’ awesome that I simply couldn’t wait to gush over it. As of this writing I’ve just completed chapter 17 (of 23) and am finding it a bit difficult to stop and write. Frankly, I’d rather be reading.

I’ve written about Todd Rundgren fairly extensively myself. Back in the middle of this century’s first decade I penned a long-form critical essay for Trouser Press, a piece that reviewed all of Rundgren’s work (solo, with Nazz and Utopia) up to that point. And I’ve met and interviewed the man myself . Like many Toddheads, I’ve seen him many, many times in concert. Fellow Rundgren fan Billy James (of Ant-Bee should-have-fame) has written two books on Todd’s career, and I reviewed the most recent of those.

But none of those projects devote serious ink to an important, influential component of Rundgren’s life and career: his production work. Beginning in the late 1960s, Rundgren demonstrated an uncanny facility for bridging the gap between artistry and technology. A self-taught engineer, Todd watched and learned and quickly became a force to be reckoned in the recording studio control room.

His working methods have always been controversial in that artist-clients seem to come out of the experience as either huge fans, or full of invective for Rundgren. Sometimes, they manage both sentiments simultaneously.

Myers’ book is a chronological history of Todd’s career behind the boards, weaving in relevant information necessary to contextualize the studio-centric bent of the book. Beginning with Todd’s involvement in the recording of the late sixties Nazz albums, A Wizard, A True Star takes the reader all the way up to Todd Rundgren’s Johnson, an all Robert Johnson covers album that (at this writing) doesn’t even have a scheduled release date yet.

In between, the book deftly manages to hit every high and low point in Rundgren’s studio career. Benefiting immeasurably from unprecedented cooperation of Todd himself, the book also makes extensive use of Myers’ personal interviews with nearly every artist involved.

This means that readers are treated to balanced perspectives on such momentous projects as Meat Loaf‘s Bat out of Hell; the chapter on that projects draws upon direct quotes from Rundgren as well as composer Jim Steinman and Meat Loaf himself, as well as vocalist Ellen Foley, and session players (and Utopia members) Willie Wilcox, Roger Powell and Kasim Sulton. And more besides.

The same approach holds true when Myers covers the Psychedelic Furs‘ Forever Now. For that chapter the author interviewed the Furs’ Butler brothers, drummer Vince Ely, Howard Kaylan (Turtles/Flo and Eddie) and Rundgren’s perennial right hand man, engineer Chris Andersen. Yet again the reader comes away with a detailed portrait of what went into the making of an album.

Myers is expert at balancing the responsibility of providing technical information with the need to tell what is always a human story. So in a given chapter the reader might learn about what mics were used on a given vocal session, but too may they learn of the emotional turmoil the vocalist may have experienced under the withering criticism of the session’s producer.

Time and again the book reinforces the aphorism that Lenny Kaye (Patti Smith Group guitarist and curator of the legendary Nuggets compilation) attributes to Rundgren’s production aesthetic: “If you know what you want, I’ll get it for you. If you don’t know what you want, I’ll do it for you.” While Rundgren’s sometimes prickly and control-freak tendencies in the studio are well documented, one never gets the sense that he horns in on the artist-clients in an unwelcome fashion. So while certain productions of his bear the indelible Rundgren sonic stamp (the Tubes’ 1979 Remote Control album chief among these), that seems to be due more to Rundgren’s remaining true to the previously-quoted aphorism.

It’s all here: the New York Dolls session, the XTC Skylarking album, you name it. And Todd’s solo and Utopia projects are covered as well, again weaving in enough contextual information about, for example, Utopia’s uneasy relationship with its record labels.

One need not be a Rundgren fan to enjoy this book, but being so adds to the pleasure. Though it’s chock full of technical information, an appreciation of A Wizard, A True Star does not require understanding of studio techniques. Myers’ style neither talks down to the reader nor assumes a level of previous familiarity with the subject. And like any good book of this type, it will likely send the reader back to re-evaluate some of the recordings discussed therein.

There are a few cases in which firsthand interviews weren’t possible. For Myers’ coverage of Rundgren’s Badfinger work, the author draws mostly upon interviews the members did years ago (at this writing only guitarist Joey Molland — no Todd fan he — survives from that group). Luckily Rundgren weighs in on the topic as well. And while some projects get only a passing mention (Shaun Cassidy‘s Wasp album, for one), a few unheard/aborted projects are discussed. Chief among the latter is Rundgren’s early work on what would eventually become Janis Joplin‘s last album, Pearl.

A fascinating read from start to finish (well, to page 230, but I see no reason to doubt my opinion will change over the course of the remaining 80-plus pages), A Wizard, A True Star: Todd Rundgren in the Studio is highly recommended addition to any serious rock fan’s bookshelf.