Today marks the 20th anniversary of the death of CCR’s rhythm guitarist Tom Fogerty. In his honor, here’s a look back at CCR. 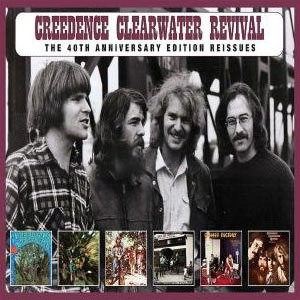 As everyone’s pretty much agreed, Creedence Clearwater Revivial was the Great American Singles Band™. But the thing is, in their brief time in the spotlight (1968-73) they released seven albums. Six of them are among the greatest albums in the rock and roll canon (the seventh –and last — is an interesting failure). The sound that Creedence put together was Booker T & the MGs meet hard rock, and it worked quite well in its era, both commercially and critically. CCR’s music is timeless, and thus remains an important staple of oldies radio.

With most of the legal wrangling between Creedence (specifically leader/writer/vocalist John Fogerty) and original label Fantasy Records now sorted out, the time was ripe to do proper reissues of the group’s catalog. In celebration of the group’s 40th Anniversary in 2008 (their self-titled debut was released in July 1968) the revived Fantasy label has reissued all of the original CCR albums (except Mardi Gras).

As CCR bassist Stu Cook explained to me in late 2007, “Creedence didn’t leave anything in the vault, really. We recorded only what we went after, and those are the master reels. There aren’t any outtakes, session tapes, ‘basement tapes,’ none of that.” He was pretty close to correct on that score; other than a few scattered live tracks and some b-sides, if you have the original LPs, you’ve got just about all of it. So what would make these reissues worth purchasing?

Three things. One, and the most obvious, is sound quality. Here, Fantasy has done a good job. Fogerty’s production was spare and straightforward, not unlike Sam Phillips‘ work at Sun Records in Memphis, a clear influence upon Fogerty. Digital does a fine job of reproducing these sounds (I’m holding on to my vinyl nonetheless). Two, liner notes. These aren’t revelatory, since they’re not written by Fogerty or his estranged ex-bandmates. But they’re worthwhile, as they provide some historical and critical context for the albums. And they’re penned by some of the best in the business, including Ben Fong-Torres. Three, there are in fact a few scattered gems among the slim bonus track offerings. And since I’m prepared to assume the general excellence of the albums as originally issued (all fall solidly into the must-have category) I’ll confine most of my comments to the bonus material.

For completists, the reissue of Creedence Clearwater Revival offers up a few pieces of historical import. “Call It Pretending” was the b-side of the first last Golliwogs (pre-CCR) single. There’s also an early take of “Before You Accuse Me” (the released version would be recorded and released a few years later). Live versions of “Ninety-nine and a Half (Won’t Do)” and “Susie Q” round out the collection. CCR sounded almost exactly the same onstage as they did on record, and rarely gave into temptation to jam, so a couple live tracks are nice, but aren’t really anything special.

Bayou Country came out a mere six months after the debut. The reissue includes a true rarity: an lengthy alternate take of “Bootleg.” It’s a wonderful track, and shows that CCR really could strike a balance between concise and jammy when they wanted to. A pair of live tracks from 1971 European dates are included, illustrating just how bare the unreleased CCR cupboard really is; the inclusion of these tracks on this disc is completely bereft of context. On the disc’s closer, “Crazy Otto” from a live date in 1969, the lineup did something largely out of character: they jammed. For nearly nine minutes. Standard blues changes. Without vocals. Good for a listen or two, but not much more. (It’s worth mentioning that the sound quality of these live tracks is simply superb.)

The band kept up its breakneck pace of releases (and maintained stunning quality control) with the release — seven months later — of Green River. Two studio rarities are included on the reissue. “Broken Spoke Shuffle” and “Glory Be” are unfinished tracks from a studio date just before the official album sessions. The first includes some riffs that would–with minor changes–appear on subsequent CCR tracks. The latter recalls the yet-to-come cover of “Heard It Through the Grapevine,” though this track is much shorter. Three more live tracks from Europe ’71 (featuring the post-Tom Fogerty trio) are included. Yet again: short, snappy, similar to the studio versions, and ultimately less than essential (especially out of context — why not release a “live rarities” type album?).

A mere three(!) months later the band returned with the decidedly raucous Willy and the Poor Boys. The reissue’s series practice of sprinkling live 1971 tracks from the European tour continues here, but what’s most interesting is the final track. In 1970, members of Creedence’s heroes, Booker T & the MGs, would open for CCR at a gala performance in Berkeley CA. Prior to the show, the two groups got together for an informal jam at Cosmo’s Factory, CCR’s home studio/rehearsal space/HQ. The bonus version of “Down on the Corner” doesn’t sound terribly different from the released one, but hearing the gurgling, soulful organ work of Booker T. Jones on a CCR song is a delight. And Steve Cropper‘s (brief) leads on top of Fogerty’s playing are nothing short of exciting. (A few video snippets from this session appeared in the now-rare concert film, and audio circulates among collectors of the entire CCR/MGs reel. Stu Cook owns the original audio reel of the session.)

Eight months after Willy, CCR came roaring back with Cosmo’s Factory, again turning in a stunning classic. This time, the reissue gives us but one live ’71 track, “Up Around the Bend.” A studio outtake of “Travelin’ Band” is included; apparently this stripped-down version was a remake possibly intended for use as background for TV lip-synching. Another track from the MGs collaboration (“Born on the Bayou”) is included, making this–in the words of an old beer commercial– the one to have if you’re only having one. This loose performance of “Bayou” is taken just a hair slower than the original, and Cropper plays lean and mean rhythm guitar. A bit of musician chatter merely adds to its charm. This reviewer’s only regret with regard to this set is that no alternate version of the monumental and multitextured “Ramble Tamble” exists.

Creedence Clearwater Revival took their sweet time finishing Pendulum, waiting nearly five months to release their sixth studio album. A musical departure, it found the group broadening their sonic palette while remaining true to their basic sound. After completing the album, John Fogerty’s brother Tom left the group. All the 1971 live tracks scattered among these discs (including this disc’s version of “Hey Tonight”) date from this post-Tom Fogerty lineup. The remaining bonus track is “45 Revolutions per Minute” (nearly eleven minutes of studio messing-about spread across two tracks). The liner notes compare it to The Beatles’ “Revolution #9” but a clearer parallel could be drawn between this and the Beatles’ Christmas flexi-discs. Bassist Stu Cook, in particular, seems to be having a heckuva time. It’s worth hearing for hardcore fans, but it’s not likely to get added to your playlist.

Nobody associated with CCR has much good to say about the group’s final album, Mardi Gras. Released by the three-piece nearly a year and a half after Pendulum, the album isn’t without highlights. But for whatever reason, Fantasy chose not to release a version of the final CCR record for this 40th Anniversary series.