Album Review: Poobah – Let Me In 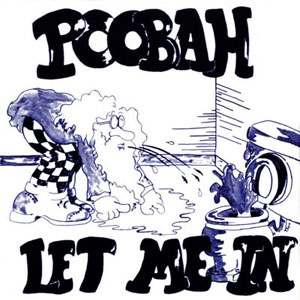 Most critics simply despised Black Sabbath when they came on the scene. And they continued to hate them for many years afterward. My well-worn 1979 copy of the Rolling Stone Record Guide awards all but one of their Ozzy-era albums a single star each; Ken Tucker calls them out on what he sees as their music’s stupidity, intractability and “goofy malevolence.” But, as the fictional David St. Hubbins of Spinal Tap might respond, “That’s nitpicking, innit?”

Clearly the word subtlety would be misapplied in regard to Sabbath. Their music was aimed squarely at the listener’s solar plexus. But what a punch it delivered. Other bands attempted to build upon that style, but few met with great commercial success, and fewer still shifted units in the record shops.

In 1972 a Midwestern band called Poobah released their debut album, a six-song album titled Let Me In. The record is now impossibly rare; original vinyl copies change hands (when they surface at all) for upwards of $600. And now the album has been reissued.

But while in all likelihood the main people clamoring for a modern-day release of this hard rock obscurity are collectors and amateur rock historians, the album itself deserved to enjoy success among a much wider audience.

Without a doubt, there’s a malevolent streak to some of the music on Let Me In. The album opens with a brief, off-putting vocal skit concerning a kid and a gun. But then the band kicks in with a signature tune, “Mr. Destroyer.” Boasting a set-on-stun guitar tone that will bring smiles to anyone who’s enjoyed Paranoid (an album which Rolling Stone grudgingly awarded two stars), the power trio drones some proto-stoner rock. The other elements of the song – assured yet busy bass lines, wah-wah’d guitars, precise and forceful press rolls (the latter a favored technique of Poobah drummer Glenn Wiseman) – all move it along.

“Enjoy What You Have” heads in a completely different stylistic direction. Sounding more like Bubble Puppy crossed with Blind Faith, here Poobah dials back the heaviness. They even add some pretty harmonies. And while leader, guitarist and Poobah mainstay Jim Gustafson consistently turns in some interesting and compelling guitar work, it’s the inventive drumming of Wiseman – think of a more controlled Keith Moon – that elevates what would otherwise be merely a good country-flavored rock tune.

On “Bowleen” the band truly comes into its own. After a Donald Duck-like spoken intro, the menacing melody begins, with a feel a bit like Pink Floyd’s “Set the Controls for the Heart of the Sun.” But when the almost-chanted dual lead vocal comes in, it’s even spookier. The tempo picks up, then slows back down, and the minimalist lyrics repeat. Gustafson spins out some clanking guitar leads, and then – as the tempo again accelerates – he engages in some shrieking vocals that sound like a cross between Uriah Heep’s David Byron, Robert Plant and Roky Erickson. Beating the Tubes’ “White Punks on Dope” to the punch by two years, a toilet flush ends the song.

Next up it’s a song actually called “Rock ‘N’ Roll.” Yeah, honestly. Here Poobah is treading in Foghat territory. The shrieks are even more prominent in this song, and they work better in the context. More press rolls, too! A Jimmy Page-like solo precedes Gustafson’s wailing of the song’s catchphrase. Poetry it ain’t, but this song will get heads nodding and fists pumping. It was in all likelihood a killer tune when Poobah opened for the heavy headliners of the era.

The original album wraps up with the title track. All the heaviness remains, but there’s plenty of texture; Poobah seems intent on avoiding musical monotony. The song’s lyrics are perhaps the weakest on the album, but they’re also not the primary focus. A drum solo owes more than a little to Iron Butterfly, but the song’s underlying beat is kept throughout. Excessive, perhaps, but do keep in mind that this was 1972. A wankety-wank guitar solo (in the early 70s meaning of the term: no other instruments) follows, and it all winds up with an all-in ending.

The original album was recorded at Peppermint Productions in Youngstown Ohio; that studio may be known to powerpop fans as the recording site of most of Blue Ash’s material. The reissue is clearly mastered from the original tapes: the frequency range is astonishing, and displays unexpected depth for a little-noticed recording from nearly forty years ago.

All this would have been enough to warrant reissue. But Gustafson — who still fronts Poobah, albeit with different supporting musicians – is intent on giving value for money. So the 2010 reissue serves up no less than twelve – count ‘em – twelve bonus tracks dating from 1972 and 1973. And with few exceptions, these tracks are the equal of the original album’s quality.

Highlights of the bonus portion include the lo-fi droner-stoner instro track “Upside Down Highway” (Poobah at their most Sabbath-like, recorded live in Gustafson’s living room) and a single edit of “Bowleen.” And while “Going to Rock City” is little more than a more tuneful rewrite of “Rock ‘N’ Roll,” it’s arguably a better tune, especially with its exhortation to audience participation. The comic-book-horror lyrics of “Walk of the Bug” are good for a chuckle, and the riffage isn’t bad, either.

The booklet includes lyrics to all the songs, plus black-and-white photos of the ’72 band. They look exactly like you’d expect them too, all hairy, bearded and slightly menacing. But the album is “dedicated with love and peace to the world,” so there’s nothing to fear. Trust us.

While I can’t speak to the content or quality of subsequent Poobah releases – and there have been many, none of which I’ve heard – I can attest to this: on this reissue of Let Me In, Poobah is indeed grand.