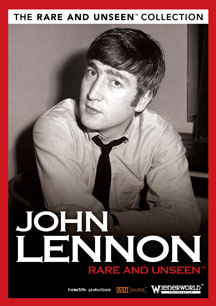 The Rare and Unseen series from Formative Productions is a mixed bag. The Beatles edition has some interesting material but feels fleshed-out. The Rolling Stones volume is pretty good but not essential. But the latest edition covering John Lennon stands head and shoulders above those two.

First, the obligatory disclaimers: there’s no Beatles music here, save for a clip of “Some Other Guy” from Liverpool’s Cavern, but Lennon’s talking over that. And this is not an officially-sanctioned product. But those extremely minor points aside, John Lennon Rare and Unseen does what it sets out to do, and does it in a professional manner. Over the course of 75 minutes, the DVD weaves together some decidedly rare footage from a short list of sources into a relatively cohesive look at certain aspects of John Lennon. His on-the-record views on fame, money, the “bigger than Jesus” controversy, the war in Vietnam, the peace and youth movements and much more are explored. Lennon was always outspoken and candid, and the DVD captures those qualities through interviews with David Frost and others.

Beatles-era interview footage shows equally candid comments from McCartney, Harrison and Ringo Starr as well; even as a lifelong hardcore Beatles fanatic with a large library of unreleased footage, I had seen quite little of this. Some well-known snippets – specifically ones surrounding the notorious 1966 Memphis and Manila visits — are shown here in longer form, providing useful and illuminating context.

The cheese quotient is refreshingly low. There are brief moments of ersatz Beatles music used as background, but they’re mercifully unobtrusive. A few talking heads appear to provide weighty pronouncements, and while some – Phil Collins, in particular – add little and may cause the viewer to wonder “Why is he even here?” – others have some genuinely interesting things to say. In general, however, these guests are at their most useful when they relay anecdotes rather than attempt to provide analysis. (Leave that to me, says I.) Collins telling us that he “never met Lennon” but probably “wouldn’t have liked him” is not especially useful information. Having been a childhood extra on the set of A Hard Day’s Night does not qualify one as a Beatles/Lennon authority, no matter how much fame one may have earned in other ways.

The two programs from which the bulk of the DVD is drawn are Man of the Decade dating from late 1969 and an episode of Weekend World from roughly the same period. The DVD is well-edited, and the archival clips are of reasonably good quality. The audio on some of the earlier clips is a bit dodgy, but nothing is so bad as to be distracting.

For anyone interested in what John Lennon had to say about, well, much of anything, John Lennon Rare and Unseen is a treasure trove of material that deserves to be seen.