The Fabulous Thunderbirds are nominally a blues band, but in the thirty-plus years since their founding by Kim Wilson and Jimmie Vaughan (the latter left for a solo career in 1989) they’ve melded a lot of styles into their music. The group rose to commercial prominence with MTV and radio hits “Tuff Enuff” and “Wrap It Up,” (both 1986), but continue to be a popular concert draw.

After Vaughan left, Wilson led an oft-changing lineup (one that for a few years included ace guitarist Nick Curran, whose album Reform School Girls is reviewed here). The latest lineup has been together since 2008, and includes Wilson (vocals and harmonica), Johnny Moeller and Mike Keller on guitars, Randy Bermudes on bass, and Johnny’s brother Jay on drums.

I had planned to meet up with the band just before they took the stage at the 2010 Bele Chere Festival in Asheville NC, but schedules being what they are, the band didn’t have time before taking the stage. In the end, this worked to everyone’s advantage. After Wilson and his bandmates worked the autograph line, they invited me into their tour bus (good thing, since it was a hot and humid July night) and we sat down for a post-show conversation. 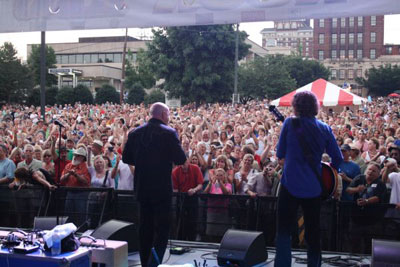 Bill Kopp: For me, your music has always sort of transcended genres. It’s not strictly blues: there’s plenty of R&B, soul and rock in it. And it’s changed over time. Do you think those changes are a function of the changing lineups, or do they have to do with the sorts of songs you write?

Kim Wilson: I’m kinda going places that I want to go. I might not have been able to go those places with other lineups. This lineup affords me to go a lot of different places, a lot of different kinds of music. More than I’ve ever been able to do. The singing has become a little more important…the singing is everything. It’s the whole thing. The harmonica is good, and you can create a lot of excitement with that, but without the songs and the singing…

It’s all about females appreciating it. So you’ve got to be able to sing ‘em up a little bit to get that. Otherwise [chuckles]…you’ve got problems. 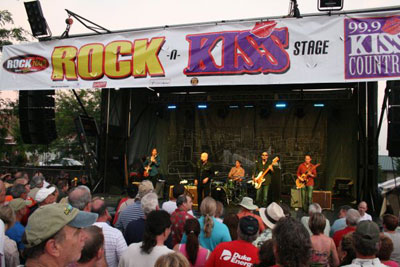 Bill Kopp: Do you think you have been unfairly pigeonholed as a blues act?

Kim Wilson: Sometimes. When we try to do things now, you know, they put us right in that blues category. And they’re able to do that because the blues category is so nebulous. People are having a hard time figuring out what blues is, because they’ve been exposed to so much stuff that isn’t blues, [but] that’s called blues. There’s very few bands who are gonna be able to really play blues.

As much different stuff as we do, lots of times on blues festivals, we’re the only people playing any blues! 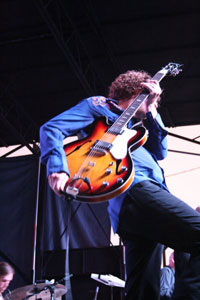 Kim Wilson: Jam bands – that’s okay. As long as they don’t call it blues. I think it’s time for just music festivals. There’s so few people playing blues now. What’s cool about these roots festivals is that you get people like Mavis Staples, Alison Krauss and Robert Plant, Robert Cray, Los Lobos, some jazz people, some soul people. You really get the cream of all musics, and you kind of cut the fat off. Ad you get an opportunity, a special day with [artists] who are kinda just starting out.

There’s a standard that you need to go by. You need to give the audience the top of what there is. And I’d like to think that we are one of those bands. But I think you’ve got to give people their money’s worth. I think that after five in the afternoon, you really can’t be messin’ around. You know what I mean? Up ‘til five, maybe. 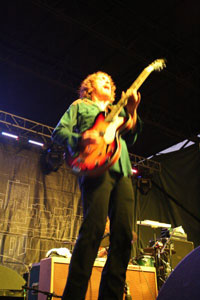 Kim Wilson: Right. What do they say? Win or go home. I mean, it’s easy for me to talk like that now, because I just got finished playing in front of a great crowd. They were very receptive from the beginning. And that makes your job so easy. You just give ‘em all you got, and you can relax. There’s not ever a feeling of being frantic.

Bill Kopp: When they’re looking at their watch and crossing their arms, you’ve got problems.

Kim Wilson: And that happens sometimes. But this is a concert pretty much in a perfect world, as far as a crowd goes.

Bill Kopp: It helps that [laughs] we all get fairly liquored up earlier in the evening.

On some level I kind of see you as a more modern version of John Mayall.

Kim Wilson: The way I’ve got people comin’ in and out [of the band]?

Bill Kopp: Yes. You’ve got the vision. The way I see it, there’s enough “space” in your vision. It’s not like, ‘you guys are gonna come in, and you’re gonna play this note, and you’re gonna play it this way.” It’s not that. It’s wide open. And it’s not just that you’re the constant guy. It’s more than that. Do you think the Mayall comparison is a fair one?

Kim Wilson: Sure. But there’s a fair number of people you can say that about. Muddy Waters, for instance. There’s a few bandleaders who have played a lot of different kinds of music that have had people come in and out of their bands. People like Duke Ellington and Count Basie had some unbelievable people.

Mayall, he helped out a lot of people. He gave a lot of people jobs, and pushed them on their way. He did a great thing. And he made people aware of blues music. He comes from my era. That was back in the sixties when we were kids. I’ve gotten to know John over the years. He’s a great guy; he’s always been very gracious, very complimentary. I have a lot — a lot — of respect for John Mayall. 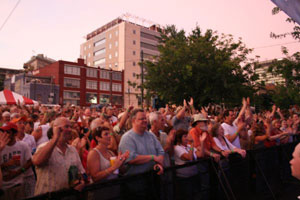 Bill Kopp: It’s hard to imagine: if we didn’t have him, what we would have missed on. Some really talented people that might not have gotten that hand up.

Four-fifths of the current lineup has been together since 2007, and Mike Keller has been with you for two years. With all the gigs you’ve done, I imagine that you all got that whole unspoken musical communication thing down pretty quick.

Kim Wilson: We’re finding some direction now. The whole Chicago blues thing with this band is not there; that’s not what it really is. You can get some tastes of it, but it’s more Bobby “Blue” Bland, Texas-type stuff, more guitar-oriented stuff. I’ll pick up the harmonica maybe three, four songs in a night. And good ones, y’know? But I think it’s really about all those different directions you can go, that you can show people.

I’ve actually thought about doing some more country…doing a country type of thing. I love George Jones, and I’ve thought about showing people what I can do as a country singer.

Bill Kopp: There are hints of that in your music. Country blues. It wouldn’t be a left turn for you.

Kim Wilson: You know that song, “Do You Know Who I Am.” That’s very country sounding.

Bill Kopp: If you tweak the arrangement a little bit, it would be totally George Jones.

Kim Wilson: [laughs] I’d love to hear him do it!

Bill Kopp: That would be nice. It would probably pay some bills, too, wouldn’t it?

In part two of our interview, Wilson talks about the origin on the concept of the band, where he wants to go with the new recordings, and who he’s listening to these days. Wilson also throws a few good-natured f-bombs.