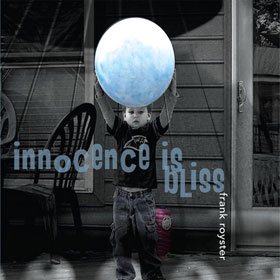 Since we’re such close friends, dear reader, I’ll reveal something about myself. I always get a lump in my throat and a tear in my eye when I watch Tom Hanks‘ 1996 film That Thing You Do! There’s something transcendent about pop music — the creation of it, the performing of it, the listening to it, and the sharing of it — and the fictitious account of everyband The Wonders captures that essence perfectly. So damn it, I actually cry when I watch the film. There. I’ve said it. That the music is note-perfect in capturing both that essence and the sounds of the era only adds to the brilliance of the movie.

I’ve only met Frank Royster once — I saw his cover band (a bills-paying side project that’s quite effective at what it does) onstage in his hometown of Charleston SC — but I don’t think I’m going too far out on a limb in guessing that the film elicits a similar reaction from him. There’s a joyousness, an innocence conveyed in the characters and their approach to playing rock and roll. They may only have one hit in ’em — maybe less than that — but they’ll give it their all nonetheless. Not for fame and fortune, though that would certainly be welcome, but Just Because.

Frank Royster’s new album is called Innocence is Bliss. [It’s available here from Kool Kat Musik.] And while the songs don’t necessarily convey innocence — he’s a middle-aged rocker with a kid, bills to pay, etc. — the knowing appreciation of that wide-eyed approach to the world is never far from the surface.

There’s an oft-used device in pop music, and it’s popular for good reason. Since many people connect with a song’s hook and melody before they dig into the lyrics, clever and effective pop composers sometimes employ a sly trick: they’ll write a super-catchy melody, and load it with a killer hook. And they’ll even craft a lyric that — on first blush — is upbeat to match. In doing so, they’ve got the hook securely into you. Then, as you’re being reeled in, you start to notice that the lyrics aren’t quite what you thought they were: the subject matter is a little bit deeper, a tad melancholy, imbued with longing, regret or one of the other more complicated emotions. Gotcha! The song rewards you for tuning in.

So it is with the leadoff number on Innocence is Bliss, “Mr. Wonderful.” Filled with timeless vibe (handclaps help in this, for sure), the song bounces along, full of jangle and vocal harmony, and once the listener is drawn in, the realization that all is not perfect sets in. And you just go with it. You’re trilling along to this song that’s not as ebullient as it first seemed.

And “Mr. Wonderful” does sound a tiny bit like a song known only to aficionados of Hanks’ film, a track called “She Knows It.” Royster’s song’s video is a delightful throwback to the gimmick-free approach used back in the 80s: high production values, an appealing pantomime visual that loosely follows the lyrics, and a couple odd shots of the band playing.

Royster’s choice of producer for Innocence is Bliss is solid enough to give it a cautious powerpop seal of approval even before the shrinkwrap is off. Jamie Hoover (of the Spongetones and Jamie & Steve) worked the boards and added instrumental support throughout. A purveyor of music in Royster’s style could not wish for a more kindred spirit to help craft a polished product.

Frank Royster’s voice is a bit unconventional for this sort of music. If he sounds like anyone, it’s Richie Havens with less bottom-end (and much more top-end) in his range. That might sound like it wouldn’t work, but it really does.

Overall the album mines a sonic style partly based on what Americans of a certain age remember as Beatles VI. The record is not stuck in amber, though: modern flourishes abound. “She’s Not Alone” features slide guitar licks of the sort George Harrison wouldn’t develop until the late 60s. A classic country (Carl Perkins division) feel is subtly present throughout the midtempo numbers. “Can’t you Make Me Smile?” is a particularly effective melding of breezy pop and a Nashville influence. Its dual lead vocal leans it back toward Merseybeat.

Royster’s a fan of the Beatles‘ bassist: I hear he named his kid McCartney, for goodness’ sake. So it should come as little surprise that there’s a song that echoes one of Macca’s lesser-known tunes. Built around an insistent piano riff, “Brena You!” is reminiscent in places of a 1972 Paul McCartney b-side, “Little Woman Love.”

“Thank You Jenny” features some particularly effective chording in the chorus, and a memorable bridge and solo straight out of mid-70s classic rock. “Oh! Mary” is filled with chiming Rickenbackers (are there any other kind!?), clever percussive punctuation and shiver-inducing vocal arrangement. “My Girl” (an original, not a cover) is the most modern-sounding track on the album, with a feel not far removed from Flashcubes, 20/20 or similar unheralded powerpop artists. (You can bet Royster knows who those bands are.)

The ballad “I’m Gonna Take It” is the place where Royster sounds the most like Havens, if Havens was fronting Red Rose Speedway-era Wings. And speaking (again) of Liverpool-based artists, Royster’s cover of the Beatles’ “Every Little Thing” fits in seamlessly on the album. It’s a testament to producer Jamie Hoover’s taste, skill and restraint that the resulting track sounds like neither the Beatles nor the Spongetones.

The infectious “Beautiful Child” is — I think — a heartbreaking tribute to someone who has passed. A careful listen will elicit a strange reaction: you’ll tap your foot, nod your head, and choke up a little bit. The song is brilliantly effective, and shamelessly manipulative of the listener’s emotions…in the best possible way.

The album has only a couple of minor deviations from Royster’s winning approach. “Life’s a Bore” aims to wed a hammering, punky style to Royster’s stacked-harmony melody, and the result is less sturdy than the other songs on the record. A brief, odd track called “Looking for Twinkle” feels tacked on. Its style doesn’t fit with the rest of the album. The song probably has great personal meaning to Royster, but sonically it doesn’t really belong on the album; “Beautiful Child” — with its hard-rocking coda — would have made a flawless album closer.

For those who enjoy modern, intelligent pop of a timeless variety, the sort of music that is informed by the best of straightforward Merseybeat and powerpop, Innocence is Bliss is highly recommended.