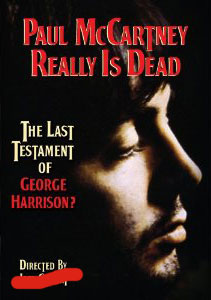 To the Irish author Brendan Behan goes the attribution of a quote which reads in part, “There is no such thing as bad publicity…” In light of the possible status of this line as some sort of universal truth, I have serious misgivings about reviewing such a piece of irredeemable exploito-garbage as the new DVD Paul McCartney is Dead: the Last Testament of George Harrison.

If you’re a Beatles fan of any depth, you’re at least familiar with the broad-brush outlines of the premise. Because I’m walking a fine line here, trying to review product but not wishing to further a single one of the ludicrous assertions set forth within the film, I won’t even get into it other than to set the basic scene. In 1969 a Drake University student (a Des Moines IA institute of higher learning with the official motto “Veritas,” or, in English, “Truth”) penned an article in the school paper called “Is Paul McCartney Dead?” Times being what they were, and disc jockeys being desperate enough for ratings to perpetuate a manufactured story, the story caught fire and spread.

Subsequently, in between puffs on their joints, countless college students the world over scoured the Beatles LP covers and inner sleeves for the “clues” that the surviving Beatles left for them. People played their records backwards in hope of finding “backwards masked” messages from John, George and Ringo. While all this effort supposedly resulted in mounting evidence that Paul really was dead, the only real results were sales of (a) a lot of magazines on the subject and (b) replacement phonograph needles.

“Celebrated” attorney F. Lee Bailey even got in on the act, hosting a program that purported to examine and weigh the so-called evidence. (Here’s a shocker: The results were “inconclusive.”) And that was pretty much the end of the story. The next big Beatles-related hoax was centered around the 1976 album debut by a Canadian band called Klaatu. They were purported to be the Beatles in disguise. (They weren’t, but they did produce some worthwhile music. That’s another story.)

Fast forward to the 21st century, the era of fan fiction. Because that, in the end, is all Paul McCartney Really is Dead amounts to: some slapdash, shoddy fanfic that anyone with a working knowledge of the Beatles’ history could easily cobble together. The video was created by the production team at something calling itself called Highway 61 Entertainment. Run by a guy who fronts a Bob Dylan tribute band — I don’t wish to lend a shred of dignity to him by repeating his name — the production company’s facility exterior is shown briefly in the film, but what viewers see looks suspiciously like stock photo with a big logo Photoshopped across it. Which would make sense: why a big building for a team of roughly six to eight people, total? (Yes, I watched all the way through to the final credits-roll, and this product is the fruit of the labor of a minivan-full of people.)

The director of this film (who, natch, also wrote it) has a spotty track record already, with a barrel-scraping series of Dylan biopics, and some right-wing propaganda films that made him a darling of the Conservative Political Action Conference. CPAC, of course, are the folks who give a platform to such luminaries of rationality as Pat Buchanan (Nazi apologist), Newt Gingrich (serial adulterer), Sarah Palin (failed half-term governor and teabaggers’ stalking horse), Ron Paul (darling of the I’ve-got-mine-screw-you crowd), and Glenn Beck (dangerously insane TV/radio personality) to greater prominence. The cynicism necessary to espouse a worldview compatible with that sort of rogues’ gallery is, one supposes, a prerequisite for embarking on a project such as this. Said director and his crew have (pardon the expression) exhumed this long-dead fake controversy and added so many “new clues” that anyone who subjects themselves to the hour and a half viewing will end up with eyes sore from constant rolling.

Put quite bluntly, this film is a piece of shit. I could go on and cite specific examples where basic facts (upon which myriad laughable assertions are built) are misstated, fabricated or just plain wrong. But that sort of thoughtful treatment of the film, its creators and its subject would bestow undeserved credibility. This 95-minute sleazefest is beneath contempt. Not merely a crass, opportunistic cash-in, the DVD betrays undisguised contempt for all of the Beatles and people in their orbit. To call it disrespectful to the memories of John and George doesn’t begin to get to the heart of the matter. And it should go without saying that the voice on tape purported to be George Harrison…well, it ain’t.

Note: You may notice that I’ve obscured the director’s name in the DVD packaging image. He deserves such treatment. And I did notice something interesting: the “official” cover art from which I sourced the image has added a question mark (“?”) after George Harrison’s name. My copy has no such punctuation. Perhaps the lawyers weighed in.

Paul McCartney Really is Dead is to be avoided with extreme prejudice. I feel dirty even having viewed it. Totally without merit on any level, this DVD is in shockingly bad taste, is amateurishly produced, and represents cynicism of the lowest order.