Album Review: Spur – Of the Moments 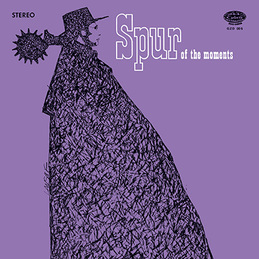 Part One: The Disclaimer

Putting the review I’ve written (covering the album Of the Moments by Spur) into context requires a bit of explanation on my part. The review itself follows in section two, but if you’re going to read that, please read this first.

I’d like to spend a few words explaining my methodology for reviewing albums. First, I tend only to review works that have somehow caught my interest; as a free agent, I don’t have an editor forcing assignments upon me, so you’ll rarely see reviews that strike the savaging tone of my reviews of Mah Jongg, War of Ages or Cradle of Filth (three truly dreadful acts, by the way). I learn of material for potential review via press releases, word of mouth, my own poking around, etc.: the usual ways.

The majority of albums that end up in my To Be Reviewed stack get there by dint of making an impression on me. I learn enough about the music or artist by reading an emailed blurb from a label or publicist, and something in the copy strikes a chord with me. If the description says the group was influenced by A Place to Bury Strangers or “old school punk like Green Day” [sic] then I call bullshit and move on. But if certain buzzwords (I won’t say what they are) appear and seem to mean it (man), then my interest is piqued.

What I do then is reply and request a review copy. What I don’t do is conduct further research into the band or its music. I make a studied effort not to learn anything more about the act — even if I’m really curious. There’s no tenet of music-journalism ethics that forces this modus operandus upon me; I do it this way because it works for me. I figure, I bring enough baggage to my assessment of a new recording; I don’t need to add to my luggage, especially since the airlines charge for it (metaphorically speaking, of course). So I go in as “blind” as is practical, with an eye (so to speak) toward judging the music on its merits.

Sometimes, after I’ve written and published a review, I’ll hunt around online to see what my colleagues/peers have to say about the record. More often than not, the opinions of those reviewers I respect tend to fall roughly in line with my own estimation of the record’s worth. Occasionally, not.

On really rare occasions — actually, just once so far, and if you haven’t decoded my signals, this is it — I get “punked,” or in the pseudo-hip argot of week-before-last, “pwned.”

It wasn’t intentional, I don’t think. But the short-form press release from Drag City made no mention that the album I was reviewing was in fact an archival reissue of a rare and long-out-of-print record. So now you know, and so do I. Here’s the review I wrote before I knew.

If I played “Mind Odyssey” — the opening cut on Of the Moments — for you, and I told you that you were hearing a heretofore undiscovered country-rock-psych hybrid from SoCal circa 1968, you’d believe me. Hand to heart, I tell ya. From the pleasing twang in the vocals to the tight yet subtle vocal harmonies, form the quick-pickin’ rhythm to the distorted loopy, fuzzed-out guitar, you’d think these guys were packing ’em in at Pandora’s Box.

And they keep it up. “Mr. Creep” wins sixties points for the title alone, but the kitchen sink arrangement throws in so many pleasing sixties tropes — all done without conjuring up a slavish wannabe vibe — that if you don’t smile, Jack, you’re dead. “Tribal Gathering / We Don’t Want to Know” serves up a slightly jazzy 5/4 take on the stylings of Moby Grape-meets-Grateful Dead. (The early Dead stuff, I mean. Thank goodness.) If Giles, Giles and Fripp had somehow gotten back to the land in Laurel Canyon instead of the South of England, they might have made music like this. And in true Dead fashion, it goes on for some fourteen minutes. But not once during that time does it fail to interest. In fact, halfway in, there are some subtle nods to early Mothers of Invention. Point is, if these guys imbibed West Coast psych, they did so from a wide array of quality sources. Creamy reverbed sunkissed harmonies lead into a Byrdsian freakout, then into an infectiously catchy instrumental break. And it only gets better. The second half of the song would be right at home on Moby Grape’s debut. And that’s saying something.

The production aesthetic is spot-on: there’s a sound and a feel that faithfully catches the feel of late sixties studios. Not, it must be stressed, the Brian Wilson studied vibe. More of the whatever-studio-we-could-afford sound. There’s an ever-so-subtle wobble to “Modern Era” that could have only been achieved one way (that I know of): Master the song onto a 45rpm vinyl, punch the center hole a tiny bit off-center, then play it and record it. Done just right, it’s brilliant. Done wrong, it’s an unlistenable disaster. Spur gets it right.

Even the lyrical subject matter seems frozen in late sixties Southern California. I’ll admit it: I love it when bands try to recreate the sound and feel of this era. But precious few manage to pull it off. They fall short on the songwriting, or make the lyrics too kitsch, or get some of the details jut wrong enough to ruin it. But not Spur. Bands like Starling Electric and the Photographic have managed to create wonderfully evocative records, but neither of their efforts scales the heights of Of the Moments.

The chugging country-rock of “Be Tender, My Love” sounds like what you always hoped the Charlatans would sound like after you read about them. “You Could Help Me Ease the Pain” is moody garage folk-rock. “All Over the World” will remind you of the Youngbloods crossed with the Peanut Butter Conspiracy (assuming you know what those groups sound like to begin with, and you should). “Help Me I’m Falling” shows that Spur can slow it down for a waltzing number. But then halfway through they briefly sound like — get this — Badfinger, West Coast Division. And as soon as you think, “Wait, that’s not the right style,” it’s back to the original arrangement, and you realize that it worked in that small dose pretty well after all. And then a piano-led coda calls to mind British psych. What, you may ask, is going on here?

That’s only the beginning of the stylistic left turns. The next track is a gauzy countrified Dillards-styled number. Exuberantly strummed acoustic guitars, jaunty pedal steel and echoey close harmonies all come together. Then you realize that the song is a cover: the Beatles‘ “Eight Days a Week.” Yikes. But damn if it doesn’t work. Next up, the powerhouse rocker “Yield Not” takes a page from the Dead’s Live/Dead version of “Turn on Your Lovelight” and applies it to an original song. Clever, that. And was that some needle wear I heard on those grooves?

Don’t dismiss Of the Moments as a mere stylistic excursion, though on some level it most definitely is such an animal. But the delivery is so note-perfect, that for anyone whose collection includes music by any of the aforementioned acts name-checked in the preceding paragraphs, Spur’s new album is a must-have. And get this: your choices are MP3 and…wait for it…vinyl. The choice is clear.

Of the Moments is shortlisted for my Best of 2010 list, and it’s only July.

Clearly, in light of these new facts (well, new to me, thankyouverymuch), some of the assertions I made in my original review No Longer Apply. Okay, most of the arguments don’t apply. Of the Moments is not a stylistic retro excursion. It’s the real deal. And what I saw as cleverness in the band getting the production aesthetic so right is in fact due simply to, well, that’s how records sounded back then.

So, while Spur won’t be coming to your town anytime soon — in fact, the way I discovered that the album was originally recorded circa 1968 was by checking the Drag City band roster site to see if Spur was on tour — the album Of the Moments remains essential.