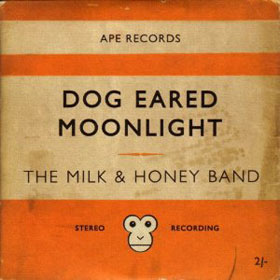 It would be a mistake to get overly caught up in the packaging of Dog Eared Moonlight, the most recent release from the Milk and Honey Band. But it’s difficult (if not impossible) to come away unimpressed by the obvious care and effort that went into the design of the album. The gatefold digipak (no plastic) reproduces the look and feel of a pre-LP-era record album (so named because they were an “album” of several records). It feels like a book as well. The weathered, worn and stained look of the album makes it feel like it’s been in your collection for years.

And it has a sound to match. According to Andy Partridge (XTC), leader Robert White has a voice “not too dissimilar to Justin Hayward. Two streets away from him,” Partridge quips. He goes on to describe the band’s sound as “a bit like The Who with acoustic guitar. Or, almost like the Moody Blues, but with more fire.”

And how can all that that not be a good thing? Well, if White and his bandmates produced pedestrian songs, it wouldn’t matter. The tracks are firmly rooted in a pop tradition, but they’re ambitious and varied as well. Soaring harmonies sit comfortably atop aggressive, syncopated arrangement of “Incredible Visions.” And the prominent use of acoustic guitar as the rhythmic element keeps the song (and the album) from slipping into too-rocky territory.

There’s that pastoral English wonderment that one can find on XTC albums. And while The Milk and Honey Band sound not a bit like Swindon’s finest, Andy Partridge’s Ape label is responsible for signing the group and releasing their albums. “People send me stuff, and then 99.9% of it goes back ’round the charity shop,” Partridge told me in 2007. “And then occasionally you put something on and you go, ‘Wow! This is so good! These people aren’t signed? It’s a crime!’ It’s a selfish thing: If it gives me goosebumps, I’m interested.”

“Waste of Time” induces the aforementioned cutis anserina. It covers all the bases: lilting verses, soaring power-chording choruses. And a sharp hook. “Maryfaith Autumn” sports an ambitious melody that relies on a longish string of notes, yet it’s accessible and endearing.

And “Absolutely Wrong” is absolutely right in its breezy use of na-na-na vocals. “No World at All” weds sessioner B.J. Cole‘s pedal steel to a waltzing melody, resulting in a feel not far removed from George Harrison‘s All Things Must Pass crossed with, say, Poco. And thoughtful, pensive lyrics like “no grand epiphanies / no big surprise” make the album worthy of a closer listen. And things really cut loose on “What You really Need.” There’s even a tasteful wah-wah guitar solo (in this case that phrase isn’t an oxymoron) on the album closer, “Flowers.” White has professed a fondness for the variety found on albums like the Beatles‘ white album, and he’s certainly brought that sensibility to the songs on Dog Eared Moonlight.

It’s been several years since the group’s excellent The Secret Life of the Milk and Honey Band was released, but thankfully White reports that the next full-length In Colour (from the same sessions that yielded Dog Eared Moonlight) won’t be so long in coming.