The Jason Falkner Interview, Part One

For more than twenty years, fans of a particular few strains of rock have known about Jason Falkner. Tagged early and often as something of a pop wunderkind, Falkner is one of that fairly short list of artists who can (and does) do it all. He plays guitar, drums, keyboards and bass. He sings lead and harmony. He writes. He arranges. He produces and engineers. That alone puts him in a category with Todd Rundgren, Paul McCartney and Stevie Wonder. 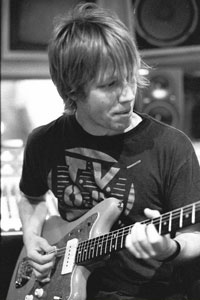 Through his career, Falkner has – his longtime fans (like this writer) would argue – never gotten his commercial due. The critics and tastemakers who know about his music are near unanimous in their praise (the odd early review in Trouser Press that claimed Falkner’s work with the Grays “sounds exactly like” Jellyfish notwithstanding). But the record industry being what it is, someone who resolutely follows his own musical path – someone who refuses to “play the game,” as it were – is perhaps not destined for high-profile success.

Luckily for those in the know, Falkner is still at it. In addition to the creativity he brings as a sideman – he’s worked in recent years with Air, Paul McCartney, Dennis Diken and a select list of other high-quality artists – Falkner maintains his solo career. His (sort of) latest album is the US release of I’m OK, You’re OK. I recently sat down for a wide-ranging conversation with Falkner. Subjects ranged from musings on the relative commercial indifference to his work to the challenges and successes he’s faced in his previous bands. His refreshing candor and willingness to field my sometimes pointedly direct questions made for a fascinating conversation.

Commercial-sounding yet Not Commercial
There’s nothing weird, off-kilter, avant-garde or otherwise fitting the classic definition of uncommercial on I’m OK, You’re OK. (“It’s not the sound of an air-conditioner hum, nor is it black metal,” Falkner helpfully points out.) Yet the album originally saw release only in Japan, and it took two years for Falkner to secure domestic release for the disc. Falkner agrees that tuneful, intelligent pop has a hard time getting a foothold in the musical marketplace. But why is that so? “That,” he laughs, “is the question that keeps me up on a nightly basis! I have several theories about this. I really believe that the general population  doesn’t really want to be engaged. They don’t want anything to shake them out of their thought process.” 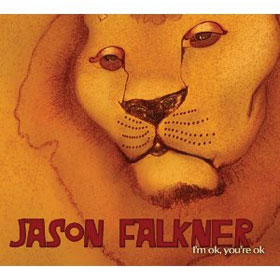 But Jason Falkner’s music is accessible. It’s not at all like, say, the Residents. “Or R. Stevie Moore,” he adds. “It’s certainly modern, but it also has a lot of classic elements to it. But I feel that it does kind of require your attention.” Attempting to define his sound – always a dangerous and difficult thing for any artist – Falkner characterizes it as “not like the big immediate, giant, modern sound that a lot of people are accustomed to. Nor is it a tinkering, lo-fi indie/rock/pop thing either. It’s right in the middle of those two things.” He believes that his music is “engaging, yet in ways it’s not as immediate as some people need things to be in this day and age.” He sums up by observing that his songs are “designed for people who have committed to sitting down and listening to [them].”

Falkner offers further observations that illustrate (a) a refreshing self-awareness and (b) the fact that he’s given this matter a lifetime’s worth of consideration. “I feel like music can really stand out when it has quality and some honesty to it…some heart and soul.” He notes that media and entertainment provide “so many things punching you in the face, trying to get your attention. And the only way to get anybody’s attention anymore is by literally grabbing you by the throat,” but that with this approach “a lot of heart is missing.”

Thankfully, Falkner is certain he won’t ever go in that direction. He tries to keep those forces from entering his creative space when he works. “I don’t listen to anything else while I’m working. I certainly don’t pay attention to what’s on the television or the Internet when I’m writing songs or recording an album. I’m kind of in my own little fantasy of my perfect world.”

The Solo Route
Speaking of that perfect world, it’s not as if Falkner can’t or won’t play well with others. Besides his roles in three high-profile bands (more on that presently), he’s toured with Air and other groups. Yet on his albums, he nearly always does everything himself. I wondered how much of that is because he can, and how much because he wants to. 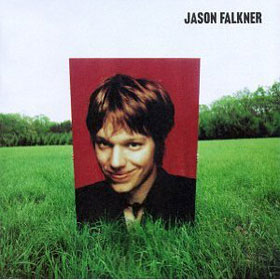 “It’s all because I want to,” he asserts. “None of it is to be showy in a ‘hey, make sure you read the credits’ kind of way.” The solo approach is an outgrowth of the manner in which Falkner gets inspiration. “I get so inspired. I’ll plug in an electric guitar into a cool, weird tube amp, and then I can’t imagine letting somebody else play it.” He refers to his late ’60’s Premier drum set. “Why would I let anybody play that? I mean, I can play it. So I can, and therefore I do.”

This approach has been a central theme of Falkner’s musical methodology from the very beginning. “I grew up playing in bands and frustrating everybody in my band. Because while I wasn’t your normal lead singer who wrote songs, I also could play the drums better than the drummer. I can play bass better than other bass players, and guitar, and so on and so on.”

But that attitude (based clearly in fact, so there) could make for an uncomfortable situation. “I kind of took a back seat, and kind of diminished my talent in front of others just so I could fit in,” Falkner recalls. “It’s not like I think I’m the best musician on the planet, or anything like that. I’m not walking around like that. I think I have interesting things to say on all of the instruments, and that’s why I play them.”

It’s not always a function of technical expertise, then. “One of the reasons why I really like my drumming,” he muses, “is because I’m not really a drummer. I’m a pianist / guitar player who is playing the drums. Some of my favorite drummers – Stevie Wonder, Paul McCartney — are like that.”

Recording is Songwriting
Falkner’s manner of songwriting fits his solo approach. “It’s also often easier for me to play everything than to sit and work out parts with other people. There are many people I know who — if I could afford them — I would have them come over and we would work out songs together. And there’s yet another reason: the people who are good enough to know what to do with my stuff on their instrument are very expensive people. Even friends. They’re like, ‘hey, I love playing with you. But you know, I get five grand a week doing this.’” He chuckles that his solo approach is “very sensible, actually. Now that I think about it. That’s one aspect of my life I’m sensible about.” 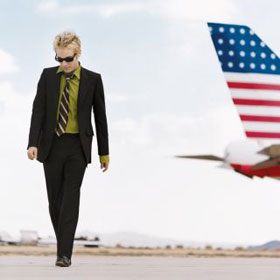 While Jason’s music is modern — timeless might be a better descriptor — there all sorts of what we might call classic elements in the songs. Little things like the way the instruments, and/or subtle countermelody lines are added into a song as the song progresses. There’s a clear emphasis on making sure that every song has a hook, a memorable melodic line. Or, sometimes several in a single song. It’s clear that Falkner puts a great lot of effort into the craft of songwriting as much as the art of it.

“I think,” Falkner reflects, “the way I write songs is kind of unorthodox. I don’t really ever write a song and complete a song on any given instrument like a guitar, or a piano, or whatever. I just start recording. And so recording is actually part of my songwriting process.”

He elaborates. “I don’t know how a song is going to begin or end. I just start recording as soon as I have a little more than half of a song done. I usually start with drums. And then I will just allocate something off the top of my head, a pattern or something on the bridge;  maybe I’ll just screw around with something as an intro. And then maybe I’ll just stick some music on top of it and kind of write the bridge…sometimes not even a chorus is done. I just kind of see what happens.” 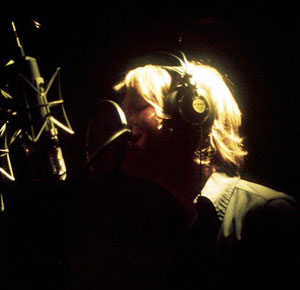 Not unlike Brian Eno’s modus operandi employed on his mid 70s rock trilogy — Taking Tiger Mountain (By Strategy), Another Green World, and Before and After Science – the concept of chance plays into Falkner’s  creative progress. “There might be an accident. Maybe I put in a chord but I hit the wrong chord because I hit the Apple space bar on my computer and I spin around and play the chord. And I might hit the wrong chord but I might like that better but than what I had in mind. Or maybe I didn’t have anything in mind. Then I’ll listen back and go, ‘how cool!’  So recording is part of the songwriting.”

Which supports his notion of doing it all himself. “I think part of this process accounts for the fact that [although] I was playing all of the instruments on my record, it doesn’t necessarily sound like that. It doesn’t sound like one brain.” He pauses for a moment and adds, “I mean, I hope it doesn’t.”

In Part Two Jason Falkner explains the term “dad-rock” and talks about his experiences as a member of Jellyfish, and then as part of the Grays.