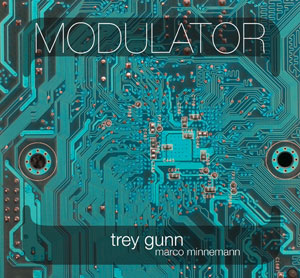 Some concepts look grand on paper, but don’t execute well. Some ideas are great in concept, but fail to launch in practice. Trey Gunn‘s Modulator is a project that succeeds on both counts.

The former King Crimson guitarist approached the making of this album in a unique manner. First, he enlisted the aid of drummer Marco Minnemann. The percussionist set up his kit and recorded a one-hour drum solo. No stopping, one take. I kid you not. Then Gunn took that recording and proceeded to write music to play atop the drum parts. Gunn broke the solo into twenty-two sections, but other than that, did no chopping, channeling or editing. In a Seattle studio more than two years after Minnemann laid down his solo in Germany, Gunn added guitars, basses, keyboards and samples. Save some Uilleann pipes and fiddle on a bit of cacophony called “Spectra,” the recording is only Minnemann and Gunn.

But how does it sound? Modulator is surprisingly accessible and organic. The pieces don’t jump out at the listener all full of hooks, but they’re not cold, remote exercises, either. There’s a constant and welcome juxtaposition between the percussion and the other instrumentation: sometimes when the drums are simple, the other instruments head toward angular, complex territory. When the drums get all complicated, the instruments sometimes traverse smoother sonic regions.

Except when they don’t. Sometimes everything is all forebodingly complicated all at once. On “Fall Time +/-” (yeah, that’s the actual title) Gunn’s guitar squawks and screams as if it’s being strangled rather than played. At times — especially when keyboards are mixed to the fore — the disc may remind listeners of Brian Eno circa Another Green World. In places Modulator is reminiscent of King Crimson’s Red era (long before Gunn was with the group). And on “Califor-a-tron” Gunn and Minnemann channel The River of Crime-era Residents crossed with Sonny Sharrock-styled guitar acrobatics. There’s a Tool flavor to parts of “Mono-punkte.” And on “Slingcharm” the duo (nearly) plays straightahead rock. But ultimately the album doesn’t ape the style or approach of any other artist.

Some sections of Modulator — though it’s broken into tracks, it’s best approached as a single composition with movements — are quite melodic, while others are static and nearly devoid of melody. Both approaches, work set as they are against each other. In a very real sense, even though the music was carefully constructed, most of Modulator feels (and sounds) more like a series of high-level improvisations. One could imagine achieving a similar result (assuming one has players of this caliber) if, say, hours and hours of improvisations were recorded over the period of months. Then an intrepid producer could comb over the tapes, select the best bits and edit them together to create a rewarding finished product.

Alas, that’s not what happened here. Such a course, apparently, would have been too easy, too lacking in challenge. Artists like this are sometimes willing to take chances — because, in the end there was no guarantee that a project like this would yield listenable, enduring music — and adventurous listeners are all the better for having heard it. And if all this weren’t enough, no less than five other musicians — including Mike Keneally — are each planning to take individual cracks at layering their compositions atop Minnemann’s solo. Yikes.