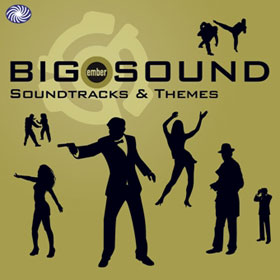 The first thing you’re likely to notice when you pick up a copy of the Fantastic Voyage compilation Big Sound: Ember Soundtracks & Themes is the cover artwork. An amalgam of clip-art silhouettes, the duotone artwork depicts tuxedoed spies firing their pistols (Walther PPKs with a silencer, perhaps?); miniskirted gals doing the frug; kickboxers; trenchcoats and fedoras; and a martini glass with an olive.

So the people at Fantastic Voyage have pretty definitively staked out the territory they’ll be covering on this collection, right? Well, yes and no. In the 60s, UK indie label Ember was responsible for turning out an impressive amount of film- and TV-related music, and this disc surveys that material rather well. There’s a separate collection of John Barry stuff, so only a few tracks (from the John Barry Seven & Orchestra) are included here, but there are several from the Edwin Astley Orchestra and the Joe Parnello Orchestra.

Soundtrack music — especially the theme — is expected to lift a rather heavy load. It needs to evoke the mood and aesthetic of the program (or in the case of this collection, programme), and it needs to be memorable, punchy. Hummable, even. Some of the best themes have managed this feat: the 007 theme, of course. Neal Hefti‘s Batman theme. Edwin Astley’s The Saint theme (especially, oddly, on the 1997 theatrical remake by Orbital). Henry Mancini‘s Pink Panther and Peter Gunn themes. And the thrilling Billy May arrangement of the Green Hornet theme, based on Rimsky-Korsakov‘s “Flight of the Bumble Bee” and featuring a bracing lead from Al Hirt.

While there’s nothing on Big Sound to knock those tracks from their perches as some of the very best theme music, there are indeed several examples of genuinely exciting music. And sometimes they come from unexpected places. There’s a sexy, swaggering feel to the Edwin Astley tracks; they’re full of punchy horn charts, twangy Fender guitar leads and thunderous tympani. The tracks are evocative of a particular style of escapist adventure.

Tony Crombie‘s brief “Supposing” is full of sparkly vibraphones and jazz guitar licks. “Man from Interpol” by Parliament Brass has that bombastic dark-continent vibe, segueing into a here-comes-the-government-man-to-kick-some-ass kind of feel. And that group’s “Night Prowl” swings like Vegas, baby.

There are some questionable inclusions. Ronnie Howard Orchestra‘s “Richard the Lionheart” is the sort of song that’s ripe for parody. It’s stiff, dorky and — worst of all — it has a prominent vocal arrangement straight out of the Mitch Miller and the Gang school. Unless you’re an aficionado of that sub-sub-genre, you’ll find the song a jarring change from the feel of the rest of Big Sound.

Another odd inclusion is the main title theme from the film Zulu. The melody feels really familiar — it may give you one of those where-have-I-heard-this moments — but as presented here, it includes a speech from the film, a report of British troops being annihilated on an African mountainside. An edit without the speech would have left us with a very short track, but it would have improved the flow of the disc overall.

You might have not even known there’s a song called “007.” But there is, and the John Barry number is excellent, full of the melodrama you’d expect. It’s not superior to the James Bond theme, but it’s certainly of a piece, with actually a bit more shade and light to the arrangement: bombast mixed with romance.

Another Bond theme, “From Russia With Love” will probably be the only track on Big Sound familiar to most listeners, and it’s a good one. The mellifluous melody is punctuated with hard-hitting accents that will evoke a mental image not unlike those screen-filling “Biff!” inserts from Batman. Thrilling, really.

The swinging Italian “In Nome Della Legge” from the Armando Sciascia Orchestra is as exciting as that outfit’s other track on Big Sound — “La Vetrina Delle Bambole” — is goofy. And while there’s only a pair of cuts from Mark Wirtz, “No Tears” is an evocative piece of music that conjures images of sidewalk cafes, Vespas and narrow cobblestone streets. And the relatively unknown Joe Parnello Orchestra turns in some respectable music that’s actually the closest Big Sound gets to standard rock band instrumentation.

If — as with this reviewer — the whole idea of what’s presented on Big Sound: Ember Soundtracks & Themes strikes you as intriguing, then you’re likely to find much enjoyment within its grooves. A casual listener might well ask what’s-the-point, but then, if you have to explain, they wouldn’t understand anyway.