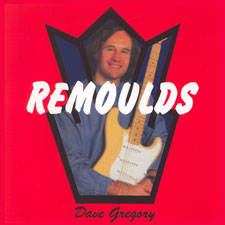 Journeyman guitarist Dave Gregory joined XTC in time to appear on their 1979 effort, Drums and Wires, and he remained with the group far beyond the end of their touring era, leaving in 1999. A master of many styles, an excellent arranger and a fine vocalist, the one thing Gregory doesn’t do (with any regularity, at least) is write songs. As such, he hasn’t carved out a solo career under his own name. He has, however, contributed his expertise to a wide array of projects, the most notable of which include his work on Martin Newell‘s Off White Album, and his sweeping string arrangements on Porcupine Tree‘s In Absentia.

But Gregory has a deep and abiding love for the old, classic stuff. A look around his web site (www.guitargonauts.com) finds favorite-song lists, a wonderful gallery of vintage guitars, and a curious entry in the “Solo” section of his discography. The Remoulds CD was, according to the official site, “recorded at home on 8-track reel-to-reel between ’91 & ’97 [with] one extra track added in October 1998.” The site explains that Remoulds has never seen commercial release, but that “approximately 50 copies [were] pressed for friends and family.” Luckily for those of us who enjoy Gregory’s work (and great classic rock in general) but are neither friends nor family, digital copies have leaked into trading circles.

Remoulds is a labor of love, but it’s far more than that. Over the course of 22 tracks, Gregory surveys some of the cleverest, most innovative rock of the 60s and 70s. And the most amazing thing of all: these aren’t “covers” in the classic sense; they’re note-perfect recreations. Similar (but arguably superior) to the first side of Todd Rundgren‘s Faithful LP, Remoulds manages the near-impossible feat of cloning such daunting compositions as Cream‘s ” I Feel Free,” The Nice‘s “Diamond Hard Apples of the Moon,” and the Jimi Hendrix version of Dylan‘s “All Along the Watchtower.” Seemingly intent on proving (to himself, friends and family) that he can do anything, he also nails such thought-uncoverable tracks as The Beach Boys‘ “Our Prayer,” Edgar Winter Group‘s “Frankenstein” and perhaps most shockingly, Richard Harris‘ version of Jimmy Webb‘s immortal “MacArthur Park.” The other sixteen tracks are equally surprising choices, equally wonderfully rendered.

The arrangements are stunning, the instrumentation is spot-on, and the vocals are as close to the originals as is possible without treating Gregory’s voice. When I spoke to Dave’s close friend and former band mate Andy Partridge, I asked him if he was familiar with Remoulds. “He’s actually got about a half a dozen albums’ worth of those things!” Partridge confided. “He’s ludicrously talented!” Among friends Gregory credits his Remoulds work to the fictitious Arch Marble and the Hallmarks, an in-joke reference to UK budget record labels (a la K-Tel) of the 60s.

A second CD compiles more Remoulds-like pieces (including covers of The Kinks, Jethro Tull and more) and a clutch of Gregory’s incidental film scoring. Partridge teases me further: “have you heard [Dave’s version] of ‘Supper’s Ready’ by Genesis?” King Crimson‘s ’21st Century Schizoid Man?’ I have pestered him. I’d say, ‘look, Dave, put that stuff out.’ He says, ‘oh, nobody wants to hear that…’ I say, ‘come put it out on Ape [Andy’s record label], ferchrissake!'” Despite that praise (and my own) it is sad and unlikely that Remoulds will ever see official release.

Rare as the proverbial hens’ teeth, the one-man effort Remoulds is nonetheless one of the most worthwhile unreleased projects of the last decade.