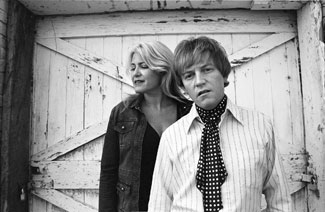 Some years ago, recent college graduate Shannon Hines was traveling Europe on a EurailPass. She recounts what happened not long after the train left London: “I said to my girlfriend, ‘let’s go to the club car and get a beer.’ When we got there, it was like a different world. Everybody had colored glasses; it was like the ‘hippie train!’ There were no available seats. These two guys were sitting there in a booth, and I said, ‘Can we sit here?'”Fast forward a few years. One of those guys was Londoner Mark Casson. He and Shannon (a Memphis native) had started dating, making trips to each others’ home countries. Eventually they married and settled in the States.

One factor that drew the pair together was their love of music, especially 60s British rock and American soul from that same era. Both had musical backgrounds: Mark as a songwriter, multi-instrumentalist and singer; Shannon as a pianist and singer. While they dated, Mark taught Shannon how to play bass guitar. After a few brief detours (Mark even did a few shows playing David Bowie in a tribute band), the duo formed The Cheeksters as a vehicle for Mark’s tuneful, classic-but-not-exactly-retro songwriting and the pair’s vocals. 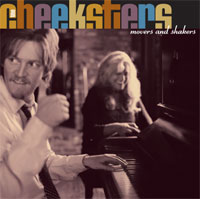 The Cheeksters — at that point just Mark and Shannon — released their first album in 1992, following it up in 1994. Moving to Nashville TN, they connected with Brent Little, a musician and producer. Little’s creative techniques helped The Cheeksters develop recordings that captured a 60s vibe while avoiding overt nostalgia. The first album by the trio (the 1997 release Skating on the Cusp) raised the group’s profile and helped them become a sought-after live act.

The Cassons moved to Asheville in 2000. They continued their recording relationship with Little, heading back to Nashville to lay down tracks for subsequent albums (the aptly-named 1965 in 2005 and their current release, Movers and Shakers). In Asheville they put together a full performing version of The Cheeksters. The five-piece live group adds guitarists Jay Moye and Michael Hart, plus Mike Baker on drums. But onstage, The Cheeksters like to change it up, switching instruments frequently.

Mark’s British-accented lead vocals are coupled with the soul-influenced stylings of the band to produce pure, upbeat pop. Mark observes that Movers and Shakers has “a slightly happier vibe to it, a more carefree attitude.” And The Cheeksters have already begin writing and recording for the followup; Mark suggests that some songs may be released online as they’re completed, rather than holding them back for the next album. But for now, their primary focus is on performance. “We’ve done twenty or more live shows this year already,” Mark says. “That’s quite a lot for us, and we’re enjoying it.” 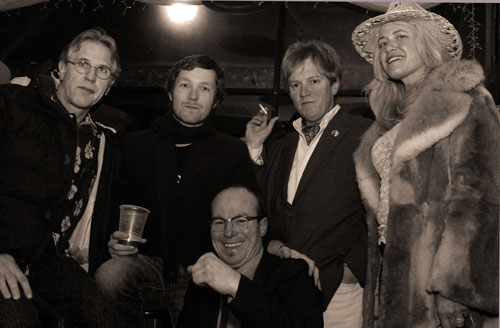