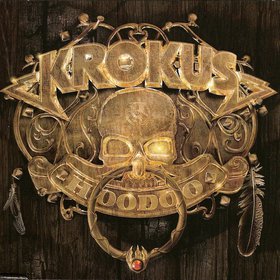 All of the swagger of 70s arena rock, delivered with the enthusiasm of bands who are on the rise but haven’t yet gotten jaded and cynical: that’s — surprisingly — what you’ll find on Hoodoo, the three-billionth album from Krokus.

I’ll be honest: I didn’t know these guys were still at it. And while Hoodoo isn’t filled to the brim with original ideas (musical or lyrical), it’s certainly an effective antidote to some of the pretentious amelodic “post-rock” that passes for entertainment these days.

The band makes clear quite quickly that it isn’t setting out to break new ground: a cover of “Born to Be Wild” is found a mere three tracks in. But stripping the organ part and replacing it with a guitar set on stun results in what has to be called arena rock for the 21st century. This is fist-pumping, duckwalk-strutting music, delivered with muscle.

Those listeners who are cliché-averse would be well advised to steer clear of Hoodoo, and perhaps of Krokus in general. But then such people should probably avoid this whole sort of music: titles like “Ride Into the Sun” and “Rock’n’Roll Handshake” are not exactly great poetry set to music. But, as famed philosopher Nigel Tufnel might say, “That’s nitpicking, innit?”

Hoodoo should not be your first stop if you’re in search of subtlety, finesse or outside-the-box thinking. But if you just wanna rock, Hoodoo might just fit the bill. There’s almost nothing about the album — except the fact that it’s on a silver disc — that pegs it as something that was created after, say, 1985. But for plenty of rock fans, that’s not a bad thing. Closet headbangers, forget the “guilty pleasure” epithet and just go on and enjoy Hoodoo, guilt free.